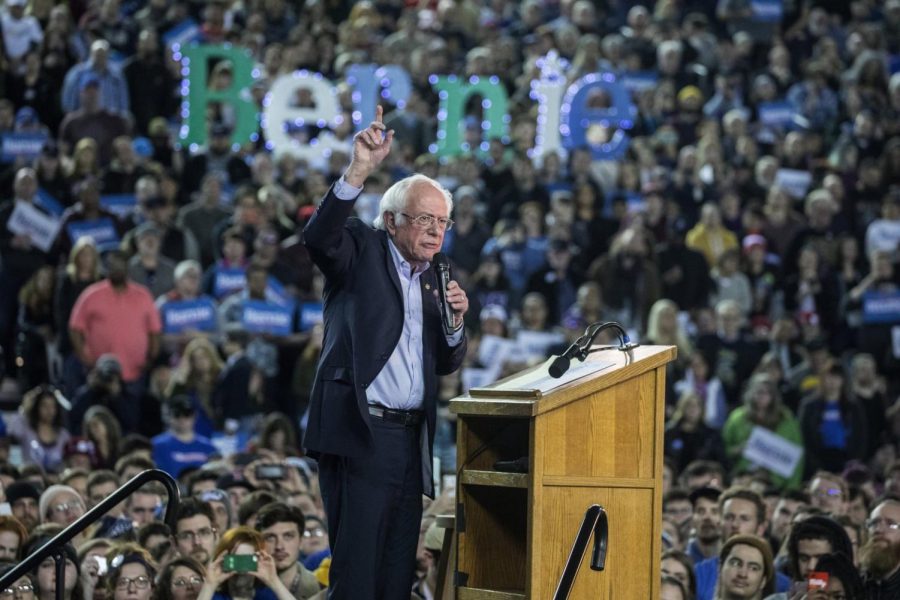 Photo Courtesy of The Seattle Times

With Super Tuesday less than a week away, millions of Americans across the country are gearing up to vote in their primary elections and choose the Democratic party nominee who will face Donald Trump in the 2020 presidential election. The results of this upcoming primary, which has 14 states participating, could very much set the stage for who will take the lead. Although the Democratic establishment is pushing for the success of the moderate candidates—Joe Biden, Pete Buttigieg and Elizabeth Warren—only one is gaining the most tangible traction as the frontrunner of this race: Senator Bernie Sanders.

Sanders, who faced defeat after losing the Democratic nomination to Hillary Clinton in the 2016 election cycle, is running again on a platform of instilling revolutionary change in the country—now with more supporters, more campaign donations and more momentum than ever before.

He has built his platform on his lifelong fight for civil rights and social justice, focusing on working class families, marginalized communities and the youth of America. Where critics deem his plans and policies “radical,” others find him to be the inspiring agent of change that the country needs. Sanders prides his campaign on raising the most contributions on the grassroots organization level than any other campaign before, “by the working class and for the working class.”

On Feb. 17, Sanders hosted a rally at the Tacoma Dome in Tacoma, Wash., with around 17,000 supporters in attendance. Before he took the stand, Seattle’s District 7 Councilwoman Kshama Sawant and Washington state’s Congresswoman Pramila Jayapal—both democratic socialists—came forward to endorse Sanders in his run for office.

As Sanders walked up to face the crowd, just about everyone who filled the stadium stood up from their seats to welcome him in, chanting “Ber-nie! Ber-nie! Ber-nie!” in unison. I had previously attended a rally of his when I was a senior in high school in 2016—now, as a senior in college, and a new election cycle on the horizon, but the same man fighting for the same values he voiced back then as well.

Each issue that he spoke on throughout the rally was met with an insane amount of cheering, yelling and clapping from the crowd. He opened by speaking out against the billionaires who have funded certain presidential campaigns and continuing his fight to uphold the 99% in America as a way to form a true democracy, not an oligarchy. He also spoke highly of the workers’ rights to unions and how creating jobs and affordable housing would benefit working class individuals and families the most.

“We’re gonna make it easier for workers to join unions. We’re gonna rebuild our crumbling infrastructure and create millions of good paying union jobs,” Sanders said. “We’re gonna put ppl to work building 10 million units of low-income and affordable housing. This is America, and we will not continue having a half a billion people sleeping out on the streets.”

He elaborated more on equal pay and reproductive rights for women, which seemed to garner the most noise from all around the Tacoma Dome.

“As a United States senator, I listen to a lot of speeches on the floor and I hear speeches from conservative Republicans who tell us they believe in small government,” Sanders said. “And I say to those hypocrites that if you believe in keeping the government off the back of the American people, understand that it is women who must control their own bodies.”

Looking past all the memes and criticism of Sanders being the country’s angry Jewish grandpa, he has continued to grow and build his platform by inspiring voters, both young and old, during this new election cycle with his progressive policies and promising solutions. His victories over the first three primary elections in Iowa, New Hampshire and Nevada have said to be history-making—and even in the face of adversity, has proven to be a subtle underdog in this race, with genuine and honest values trailblazing his lead.