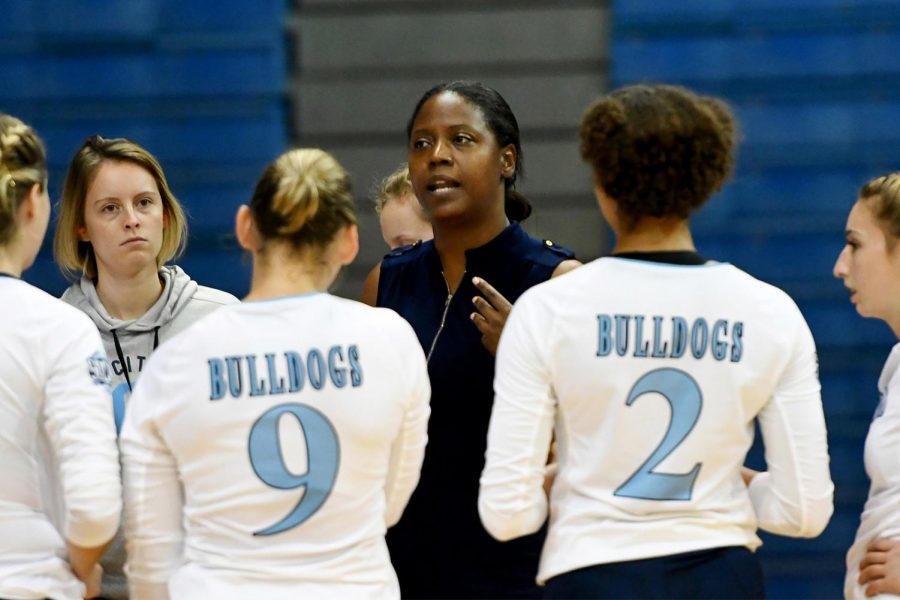 Earlier this month, Michelle Cole was named the new head coach of Seattle University Women’s Volleyball program. She comes from a highly skilled background and has a hopeful outlook on the future, beginning the position on Monday, Feb. 24.

“Most people start much younger, so I had to get good really fast and I had a lot of knowledge to acquire in a short time,” Cole said. “I had no idea what was going on in my freshman year of high school and by my senior year I had a full ride scholarship to Texas A&M.”

Competing at the Division I level at Texas A&M, Cole was part of the successful Aggie team for her entire four years of eligibility.

Cole was named head coach following the retirement of James Finley, the previous head coach. Finely coached at Seattle U for seven seasons and in college athletics for a total of 21.

Coming off an improved season, in which the Redhawks finished 13-18 and qualified for the Western Athletic Conference (WAC) Championships for the seventh-consecutive season. The 2019 team was one that will be hard to match, as they were ranked among the program’s top five in single-season totals, digs and blocks.

Cole looks to solidify the roster and continue to prepare the team for the looming 2020 season.

Cole did not begin her full-time coaching career immediately after she finished her professional career in Spain. Cole was a sales representative, but also was an assistant coach at Occidental College where her friend was the head volleyball coach.

“The experience was not like anything I could ever forget. Once it was over, I began getting heavily involved coaching club teams as I was still in sales,” Cole said. “I had this moment where I realized that I was spending all my free time coaching, so maybe coaching volleyball is what I really want to do in life.”

Cole now takes on a new challenge, as Seattle U marks the first time she will be coaching at theDivision I level.

“It was really important to me that I worked in a place where I could be myself and coach. I didn’t want an athletic director or sports administrator that wanted me to be something else,” Cole said. “We were all on the same page of the total athlete and putting people in position to win by giving them opportunities, resources, and the information in order to do that.”

Cole also noted the importance of a coach’s role extending beyond the court.

“The coach-educator idea is one that really resonates with me and it is something that is a very big deal here at Seattle University,” she added.

Cole emphasised that she does not intend to change the program immediately. As of right now, her plan is to gather information while getting to know the athletes and systems in place at Seattle U.

At the end of the day for Cole, it boiled down to cultivating and forming a long-term legacy for the program so that athletes who have left felt invested for life—like a family.

“More than anything I want athletes, after they leave, to want to come back. To come back and watch games, or say hi, and to come and visit us while we are on the road—because they miss the program and the experience they had while they were here,” Cole said.

Current members of the volleyball team were given the opportunity to meet with Cole beforehand. They were able to ask questions and catch a glimpse into the future of Seattle U volleyball. Senior Rachel Stark and Sophomore Lily Eason were a part of the meeting and noted the enthusiasm of the team despite drastic changes.

“As of right now we are in a transition state, and it has been interesting as captains to handle that without having a concrete answer of who our new coach is, and should we follow old rules or create new ones,” Eason said. “I think with Michelle starting this next week is going to help us find a lot of clarity.”

The team is not only getting a new head coach, but a completely new assistant coaching staff in the 2019-2020 school year. During this time of uncertainty, Eason expressed that Cole is a welcomed change of energy.

“Our meeting with Michelle was great, she immediately asked ‘What do we want out of our season and our goals?’ Then she began to write it all down on the white board,” Stark added. “Within a half an hour she had built an entire road map of how we were going to be successful in our next season.”

One of the team’s goals is to win the Western Athletic Conference Championships.

As the team has yet to begin working with her on the court, Stark explained.

“We are open to any changes and we are excited to see what the future holds.”