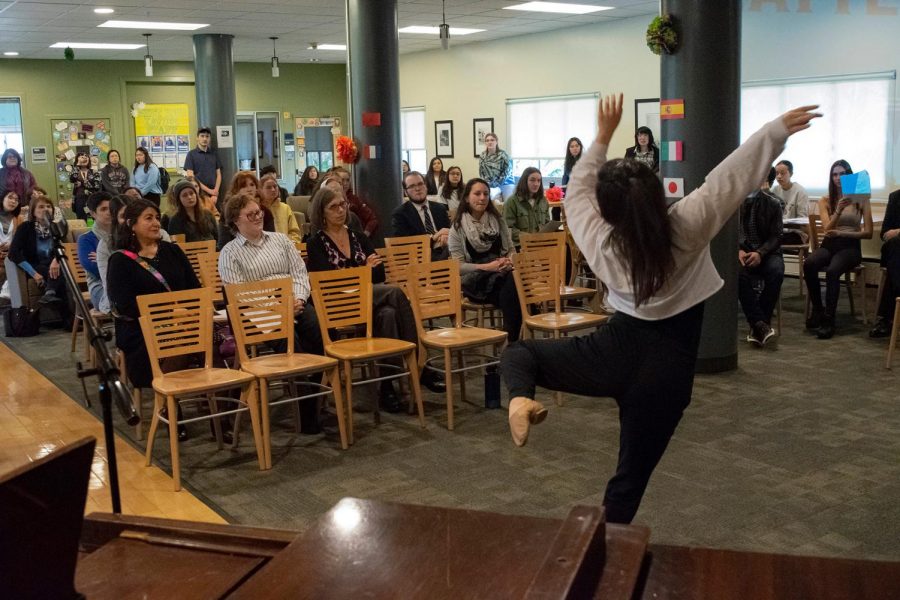 The performances, food and community represented all languages offered at Seattle U: Arabic, Chinese, French, Italian, Japanese and Spanish.

Sophia Hwang performed her own contemporary dance number to “Si t’etais la” or “If you Were Here,” a French song she chose after her class learned about the meaning behind the lyrics

“I wanted to participate because I love Maria [Leon] with all of my heart, and I just thought, ‘Why not?’ I do this anyways, alone in my room, so why not do it for a better cause?” Whang said. “It was really cool to see a whole bunch of different students doing different things, especially because I knew people from all sorts of majors and interests and they were all in different languages.”

French professor Maria Leon spoke to the learning experiences that this event provides. It allows for students to interact—even for a short time—with their peers in other language classes.

“I think it’s really cool for all the students to see other students learning languages and to see the diversity of languages. Even if you don’t understand Japanese and they perform a song, you get an idea of what it sounds like and the cadence of the language,” Leon said. “It’s not a talent show, they’re not there to dazzle everyone with her beautiful singing skills. It’s more [seeing] what each other is learning and what this language sounds like.”

The College of Arts and Sciences language requirement brings many students to the language department. Without the requirement of one year of foreign language, many of the performers may have found their way into language courses.

Salatsky initially wanted to take Japanese courses at Seattle U, but they were full by the time she registered. She opted to take French instead.

“I wish the [Seattle U] language program [would be] expanded. If you look at UW, they have so many different languages. They even have Baltic languages, and I’m Latvian so that would’ve been really cool as an opportunity,” Salatsky said.

As far as the performances, Salatsky appreciated getting to see the talents of her classmates outside of the classroom.

“I’m not much of a performer, I just like to cheer people on,” Salatasky said. “Yesterday, we saw Sophie [Whang], and it was just so nice to be there and see her and see everyone else.”

Leon also spoke to the value of learning another language, recognizing that employers often prefer people who know more than one language, but also noting that the value goes far beyond this.

“In the word University there is that idea of universe, and the universal. This is a place where people from different backgrounds, not just social backgrounds, but also cultural backgrounds come together to study together. I also think professionally, students are better off with another language and I know that for a fact that employers prefer people who have learned a language.”