Time Out Session: Grady and Newblom Sprint to Success 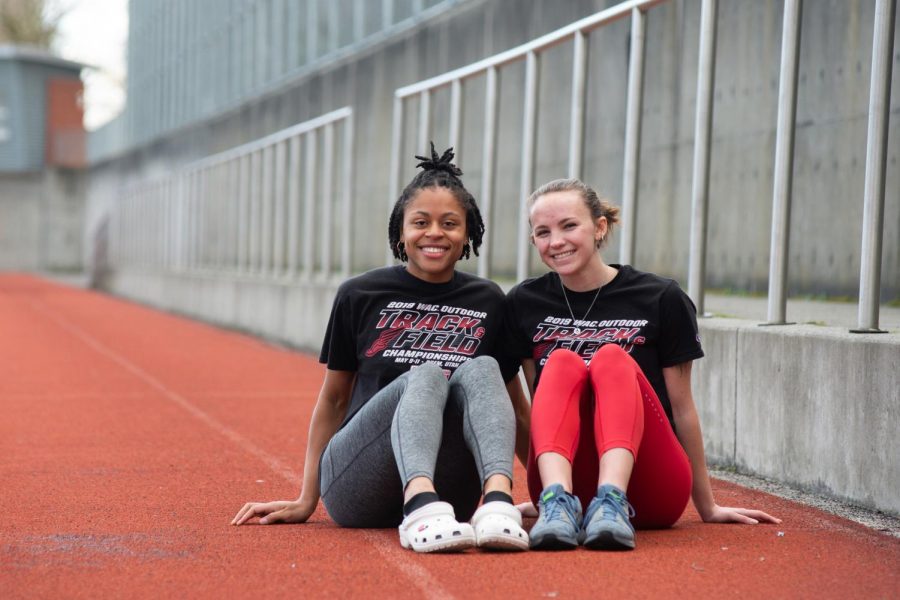 With indoor season for the Seattle University Track & Field team in full swing, both Sophomore Regie Grady and Senior Michelle Newblom have set records in their respective events. Grady broke the 200-meter indoor school record in Idaho, finishing second in a time of 25.59. Newblom broke her own school record with a first-place finish of 8.91 in the 60-meter hurdles.

Newblom improved upon her own 60-meter hurdle record, which she hopes to break again before the season ends in just two short weeks. Newblom also holds the outdoor 100-meter hurdle record. Together, both Grady and Newblom share the 4×100 outdoor record.

EJ: Which events do you race?

MN: My primary event is the hurdles, but every once in a while I’ll run an open 200 or an open 60. When Reggie got her record at the meet, she actually ran that race right before I was going to run. So it was really cool to see her break the record, and then follow that up. So yeah, mostly hurdles and then relay.

EJ: What does it feel like to break a record?

RG: I’ve wanted to since I got here, and there’s a few more that I’m looking at that I want to break. It wasn’t like I got into the race and that was my immediate goal, and if anything, I really tried to not focus on the time. You can kind of denote where you’re at, I was in the first heat, and that was the fastest heat with the fastest girls, and I knew I wanted to get first place. I ended up not getting first, and then I was shocked that I got the record so it was like a surprise—I was really happy. I was happy I was in the 25’s; I’ve been wanting to be in the 25’s in indoor for a minute. The whole record was a complete shock when coach said I ended up breaking it.

EJ: What does it feel like to break your own record?

MN: It was a lot of fun. I was kind of hoping to do it a little earlier in the season, but it was awesome. I was just waiting for that race to come together. All the ones before it there was something wrong or I just needed it to come together. So it’s really cool that it came together at the finals in Idaho. I always like running with my team watching me, too, and at a lot of UW meets they can’t because the hurdles are so early.

EJ: What is your favorite part of being on the track team?

RG: I’ve been doing track for so long. I knew going into college that I wanted to keep doing track. I enjoy my team, my teammates and my coaches are amazing—they’re super flexible and very understanding. And that’s not to say that they don’t push us, but they know when to be a coach and when to be your friend. These past two weeks when I broke the record, and this week, has been midterms, so that’s also been on my mind. I think the coaches are really helpful at juggling all of that. The atmosphere of being at a meet, it’s nerve-wracking— but I love that too.

MN: My favorite part of being on the track team is that we’re all like one big family. Going to practice and working out doesn’t feel as bad or as hard when it’s like with your friends. We really just have a good team culture.

EJ: What are your goals for the rest of the season?

RG: I have my eye on the 400 school record, and my times right now have me in a good place for the Western Athletic Conference (WAC) for the 400 especially. And for 200, there’s some fast girls in our conference.. My focus now is on the 400, our relays and the 400-meter hurdles.

MN: It’s my last year so I think my main goals and themes for this year are that I don’t want to walk away with any regrets and I want to take advantage of every race and every practice I have. Also, to give my 100% to every practice and every race. Hopefully, PR every meet, which also is cool that whenever I PR it comes with the record since my PR is the record. So to just lower the 60-hurdle record before indoor is over, I’d like to place at conference, place at outdoor conference in the hurdles and just take advantage of every day that I have left. 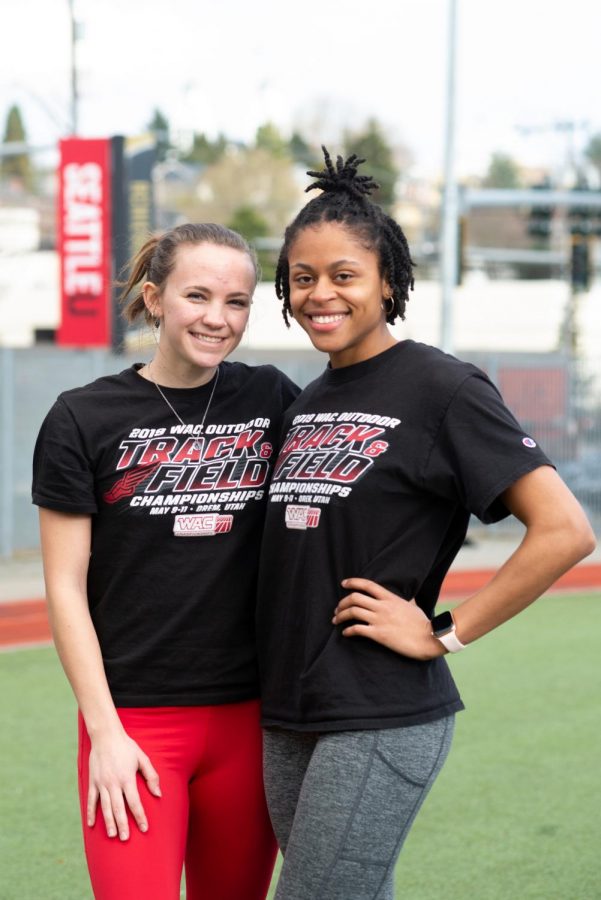 EJ: What is the track team culture like here at SU?

RG: We’re trying to really cultivate more encouragement this year, and just being on each others’ side It’s hard to keep track of what each of us are doing. Like today, there’s competitions happening at UW and I’m not there. I’m here doing my workout, focusing on class, and then I compete tomorrow when the people there today are going to be doing the same thing I’m doing right now. So it’s hard, but I think just making the effort to really know what’s going on. I think we’re doing a really good job at motivating each other even though a lot of the time we’re not all together.

MN: I think one interesting thing, especially coming here my freshman year, is we’re a much smaller school and a much smaller team compared to other division one schools—especially in our conference. What comes with that is we’re all really close, it’s not super cliquey, there’s not a lot of us and because of that we get to more intimately know each other and know everyone’s events. I think it could be a con that we’re a smaller school, but I definitely think with the culture, it’s been a positive.

EJ: How do you balance being a collegiate athlete and student?

MN: It’s definitely tricky at times, but now it’s my fourth year so I’ve got a little better hang on it, but it’s pretty much just like time management and getting priorities straight. Our coaches are also really good at helping us be student-athletes and managing that, so if we have a bunch of homework or didn’t get a lot of sleep they’re really good at caring about us as a person, not just an athlete, and wanting us to have that time to recover.

EJ:After running for SU, do you have any athletic goals for after graduation?

RG: I don’t see myself running competitively after college, so this is the peak of my athletic ability and I’m really just trying to see what I can do while I’m still here. In terms of exercising and running, I think that’s always going to be a huge part of my life. It does kind of make me sad, thinking about it all being over so soon. I have friends who are graduating this year and, just the thought of that being around the corner puts a little bit more pressure on me to get what I want to get done.

EJ: Were there any memorable moments or anything you’d like to add?

RG: I’m so proud of Michelle. I missed her preliminary race, but she had to race twice that day in just one event. She was still in the 200, so she had had a really busy day and was just kind of in her head about it. I saw her and was like, ‘You might not be happy with how this went, but you have a chance to make up and fix what you did in the first race again.’ And I can’t tell you, the rush and the adrenaline I got watching her get out the blocks. Her start was amazing. And from as soon as she got out, she was eyes on the prize—it was so good and I’m just so proud of her. This is her last season, and just to keep watching her break down her own records, she’s going to leave this place with something that’s going to be hard for future short hurdlers to match.

MN: It was so exciting to watch Regie break the record. I was also running the 200, two heats after her, and when I saw her time pop up on the board I had to ask the girls around me what her time was because I knew she was so close to the record and she got it. I was so stoked for her, it definitely motivated me to run my race and she deserved that moment. She’s only a sophomore and I can’t wait to see what other records she crushes.