“The Children” at the Seattle Rep is Fun and Deadly Serious 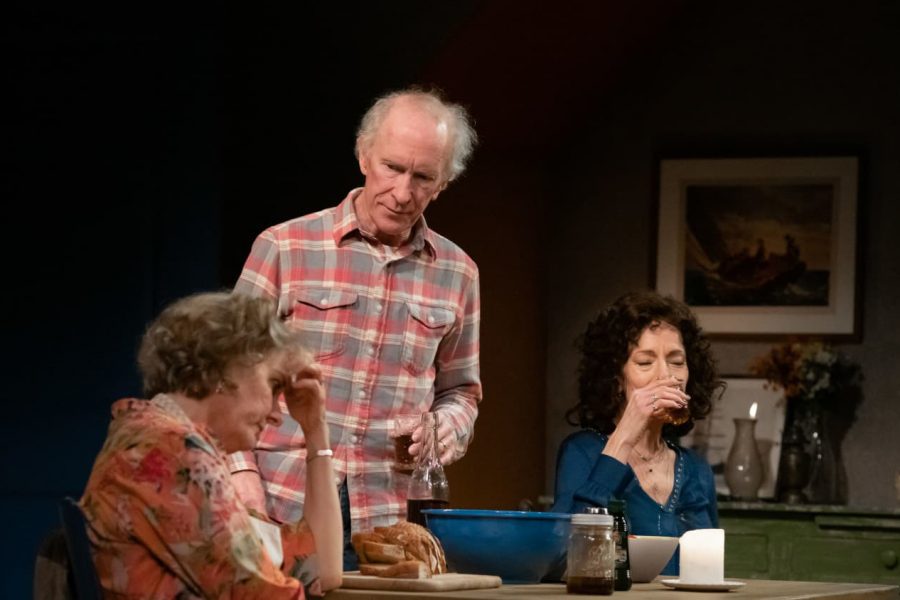 We are destroying the planet.

The play takes place in an English cottage after a nearby nuclear power plant has exploded, leaving an aging couple—both of whom used to work as engineers—on the edge of the fallout area. An old friend, a physicist who used to work at the power plant with them, comes to their doorstep.

Her intentions unravel throughout the runtime, and tension builds to a moving conclusion. There is no intermission in “The Children,” which allows the show to continuously grow its layered plot, with only three cast members.

The play expects intelligence from viewers. There are several elements that, if handled by the wrong actors or director, could prove frustrating. Why is there a four minute scene discussing the fragility of a household appliance? Why is there a seemingly pointless conversation about a death hoax in the play’s opening minutes? The answers come within the tight hour and 40 minute runtime, but it takes a talented group of drama-curators to allow Kirkwood’s brilliant composition to shine.

“The Children” is not an average play. It boasts witty comedy and some enjoyably light-hearted moments, but these are all in service of a serious message about responsibility, nature and death.

Productions that have an ecological message, or something to say about death and loss, are a dime-a-dozen these days. The Seattle Rep has produced at least three plays that could be slotted into one of these categories in their 2019-2020 season alone.

Debuted in London in 2017, it is undeniably British in tone and humor. If there is one worry that a viewer could hold the minute the Rep production starts, it’s that the cast is using English accents. While dialect coach Judith Shahn counseled the performers well, any use of accents threatens to impede the performances. However, the choice pays off and the actors settle into their roles well living through their characters.

There are three characters in the play. Hazel, played by Jeanne Paulsen, is a tense woman who is clearly rattled by the devastation that wrought the country. Her husband Robin, played by R. Wright, is a jovial figure who is harboring a deeply cracked emotional core. The intruding Rose, played by Carmen Roman, is a wildcard.

With such a frugal set and miniscule cast, “The Children” is a daunting task for any production to run. One lackluster performer, set piece or scene could seriously undermine the audiences’ connection to the play.

Director Tim Bond conducts a near-perfect symphony of performances. As the audience moves toward their seats, a nearly imperceptible hum of ominous background noise infects the theatre. The sound fades as the lights go up, but the foreboding feeling remains.

Lucy Kirkwood’s script is efficient. Every line has a purpose. The plot is undergirded by layers of symbolism that pack a strong punch, but it also works alone as a thought-provoking character piece.

“The Children” illustrates the feeling of panic that is felt around the climate today. In Seattle, the Vachon gallery hosted a series on climate art in October. Seattle University’s Housing Association contains several “eco-representatives” in the residence halls. In 2018, Seattle U’s Center for Environmental Justice and Sustainability housted a plaintiff in a case against the U.S. government for violating young people’s right to clean air.

The sense that, as Hazel calls them, “the powers that be,” are unwilling to end the horror of ecological disaster is matched by the sense of individual responsibility the show holds. Each character is aware of their culpability, and the audience is invited to share in that feeling. Rose, the harbinger of moral reckoning, even asks if the couple has ever had to “really give something up.”

The play’s ending cements its status as a vital play for the early 21st century. In an era where the amount of theater dealing directly with issues of politics has reached levels of saturation, “The Children” possesses a transcendent subtlety that achieves more than less talented playwrights could ever hope for. It forces us to examine our own responsibility to our planet and each other. There is no more relevant piece of theater showing in Seattle right now.