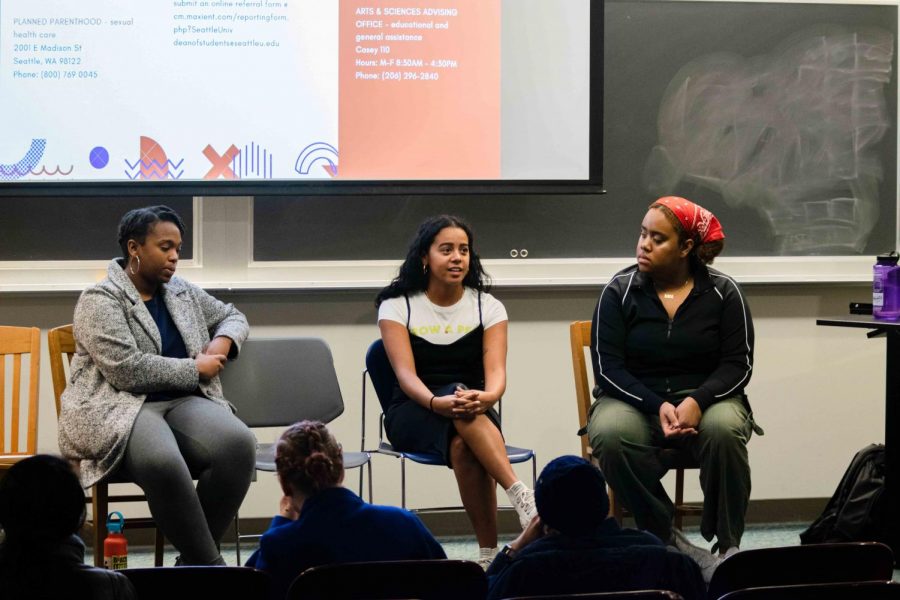 The Leadership Committee on Intersectionality and Justice (LCIJ) hosted a student panel and open forum on students’ experiences of marginalization in the College of Arts and Sciences.

The discussion was exclusively for students, which allowed for an unfiltered conversation. The discussion consisted of a panel at the beginning that spoke of their own personal experiences of marginalization and interactions with Seattle University’s resources and how students felt it benefited them or left them at a disadvantage.

Soleil Cababa, a third-year digital design major, spoke on the panel. She has personal experience working on campus.

“The marginalization that I have faced came in the form of a lot of microaggressive comments,” Cababa said. “I had to take matters into my own hands [but] I had a resource through Dr. Kate Elias.”

Leah Dooley is a fourth-year majoring in women and gender studies and English literature. She is part of the planning committee in the SEC and is one of the three co-chairs.

“At a certain point, it’s really more on the staff and faculty. Students can only do so much,” Dooley said. “We are also only here for four years and when you’re the person who’s being damaged by the behavior, I don’t think [students] have to continually defend ourselves.”

The discussion opened up for audience members to speak up about how they related to their peers on the panel. At the end of the talk, the LCIJ student representatives asked the audience how and where Seattle U’s infrastructure should be addressed and altered.

Jonathan Choe is a fourth-year majoring in philosophy and humanities for teaching. As an audience member, Choe reflected on his thoughts for the future that the discussion touched upon. Choe thought that this talk showed the “hidden side of student experiences.”

“We definitely see a lot of promotional materials about what goes on campus [but] we don’t see how students respond to that,” Choe said in an interview following the event.

Choe believes that there are many things that can be tweaked so that students are more aware of the resources they have. Choe also mentioned an idea brought up in the discussion to bring awareness to students about resources that are provided for them.

“Take 5-10 minutes in the class, in a UCOR, to talk about a certain office,” Choe said. “I’ve seen that someone from Disability Services or Student Outreach will come and give a little spiel.”

A lot of the attendees agreed with this statement as it humanizes the office and “Puts a face to the name and the office.” The discussion highlighted some of the resources that are available on campus for students such as Seattle U’s Counseling and Psychological Services (CAPS) and Office of Institutional Equity (OIE). Comments brought up were that students may have heard of these offices, but are still unsure of how these resources benefit them or how to find the right resource that will aid them with their unique situation.

Serena Oduro is a student representative on the LCIJ and a fourth-year majoring in history. There are two students on the committee, the other being Senior Michael Ninen.

They both began their roles during the winter quarter of 2018. The first event that they hosted only had one person in attendance and they used that experience to learn and grow by making their future events more specific.

“We also market our events about being about resources on campus, not just talking about experiences, because students don’t want to just relay every bad thing they’ve been through,” Oduro said.

The LCIJ’s goals are to advance the structure of the university to increase the diversity of students, faculty and staff. Last week’s discussion is an example of the committee promoting spaces to talk about and address the issues that students face.