Goodwill Gold: From High School Mates to a College Band 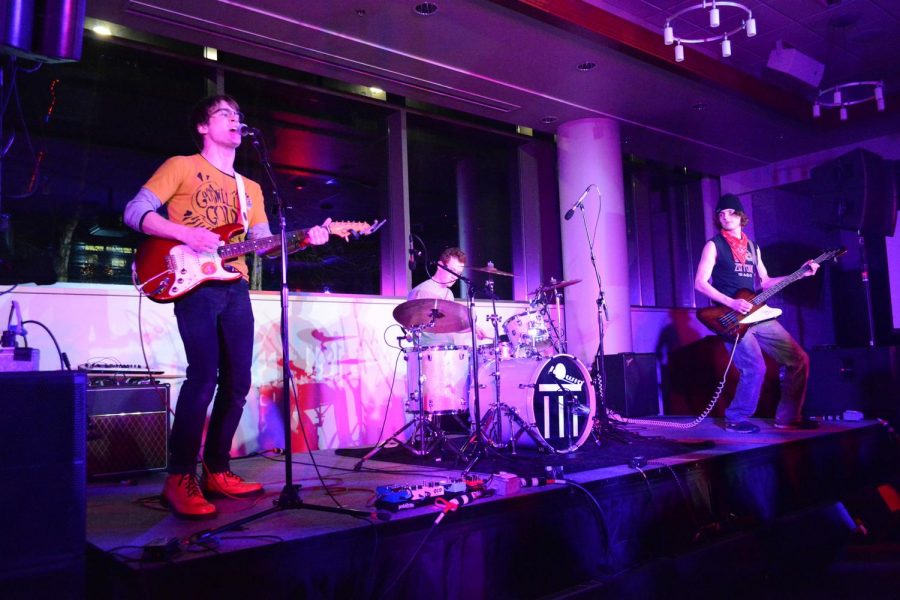 Battle of the Bands is one of the most important musical competitions, hosted by Student Events and Activities Council, for small bands on campus. Goodwill Gold held its final rehearsal in preparation for the Battle of the Bands contest in hopes of playing at Quadstock 2020. They can regularly be heard, amps and all, in the basement of Campion Hall, in the music room just steps away from the Cave.

Goodwill Gold is a local band consisting of three members: Seattle University students Christopher Nardeli and Ethan Garrett, and their friend Dylan Chandler. They all come from Kingston, a small town near Edmonds, Washington.

While living in Kingston, they all went to the same high school but afterward, all members settled down to follow different paths.

Even though they went their separate ways after high school, the band united about three years ago. 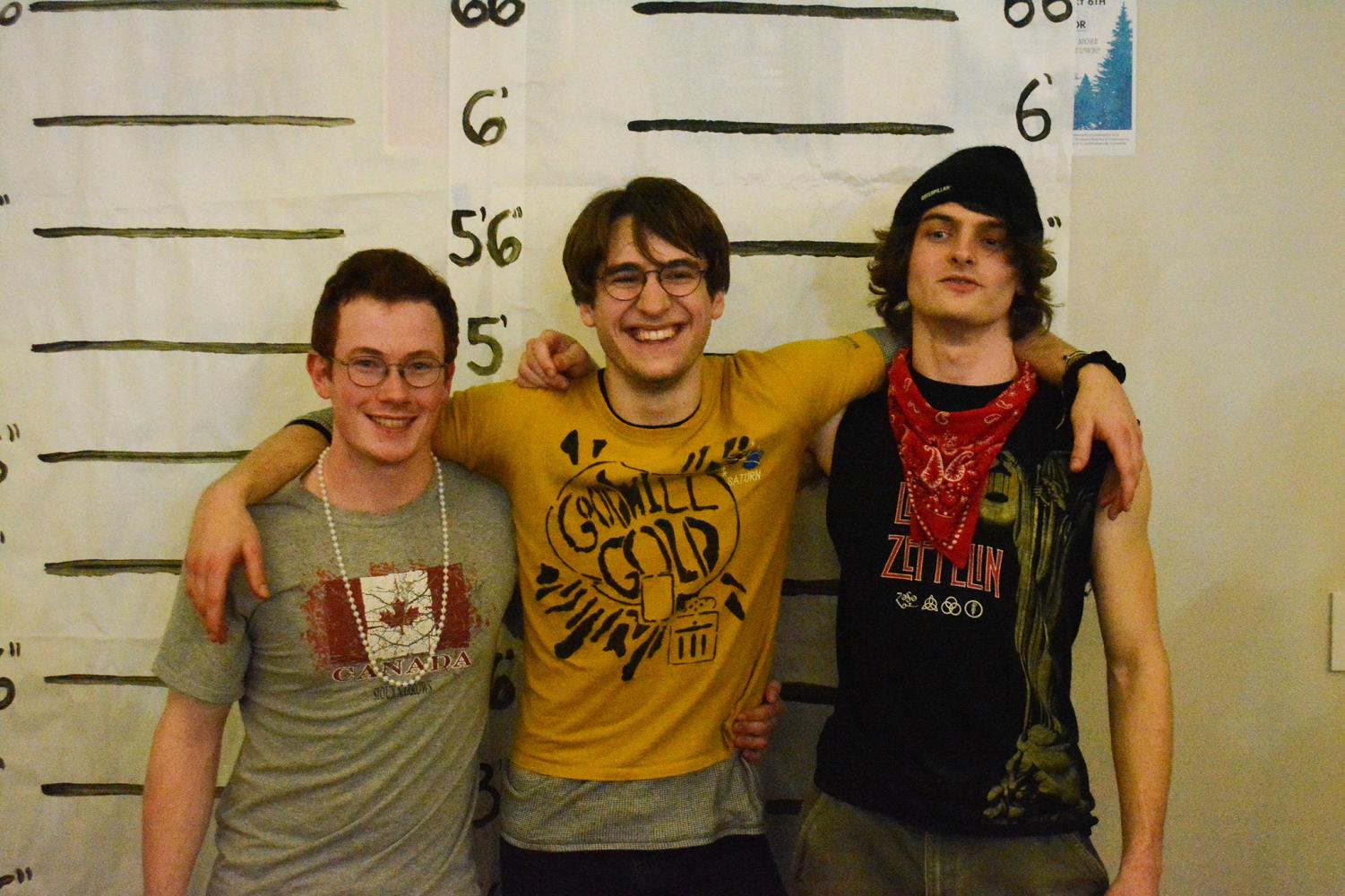 When asked about how the band members got into music, Nardeli jokingly answered about an old partner being his inspiration.

“I got into [music] because my ex played guitar, so I have to play guitar to prove that I’m worth something ,apparently. And that is why I picked up the instrument,” Nardelli said. “I dragged [Garrett] into it because we were in calculus together, and I didn’t understand anything but he understands everything.”

With a strong musical background, playing and learning instruments since middle school, Chandler was chosen as the bassist of the band. Ironically, before playing the drums, Garrett used to play bass but decided to stop, instead wanting to switch to playing the drums for Goodwill Gold.

A band’s name is an important facet to any musical group, on par with their distinct sound. Chandler said that they coined the name during a trip to Goodwill. It was either Nardeli or Chandler’s friend that called a really nice thrifted jacket, dubbed “Goodwill gold.”

“Chris mentioned that it could be a good song name, but that sounded like a band name because it is a synonym for ‘diamond in the rough, which I think is a cool name to have for a band.” Chandler said.

“If we never make it, we’ll sell our shitty CDs on the bargain bun rack, and like, it’s gonna be… kind of funny,” Nardelli said. 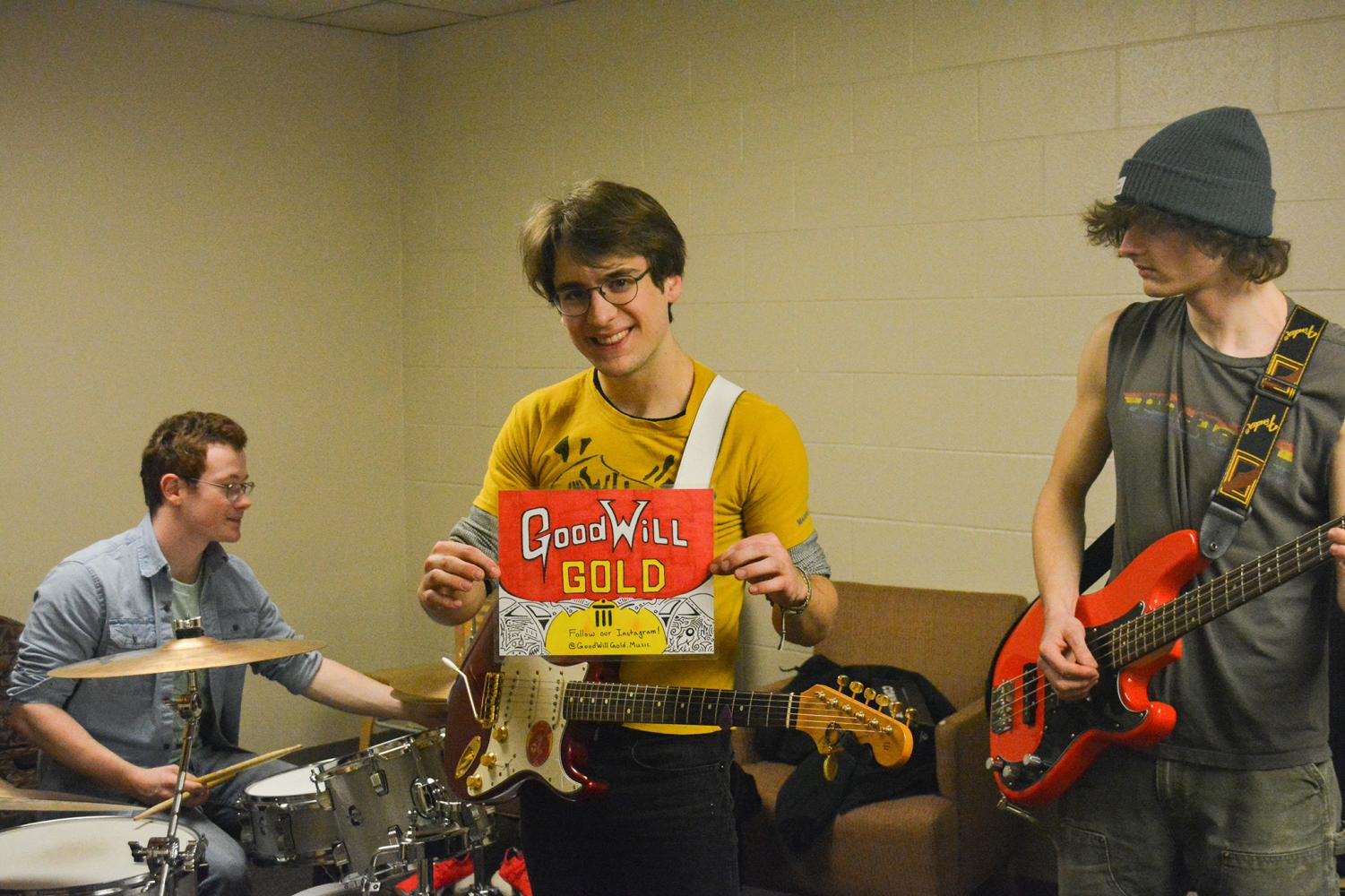 In terms of musical style and inspiration, Chandler said that he loved “old people music.” He passionately shared many artists the band loves, using plenty of strong language. There was deep passion in Nardeli’s voice as he spoke about things from his musical influences to problems of materialism.

The everyday lived experience of the group funnels into inspiration for song lyrics, from the fixer-upper barn the bandmates lived in last summer, to a love for Dungeons and Dragons. With similar interest and varying personalities, the group plays off of each other’s strengths, in and out of the studio.

“I feel like we balance each other out very well. And it’s really nice because [Ethan Garrett] has way more discipline than I do, I’m all over the place,” Nardeli said. “But like sometimes that energy to want to go out and do things is helpful. There’s the drive, but then someone needs to unleash it.”

There was a whole list of legacy drummers who inspired Garrett to pursue playing drums and becoming a drummer, including John Bonham and JD Beck. He said that he was a self-taught drummer—he learned by watching tutorial videos on the Internet.

Nardeli said that he was looking forward to the Battle of the Bands, and he aimed to win the whole contest

The band has a strong chemistry that can drive them to success. For now, their music can be found on Spotify. They suggested California Rap as their favorite songs that they have recorded so far.