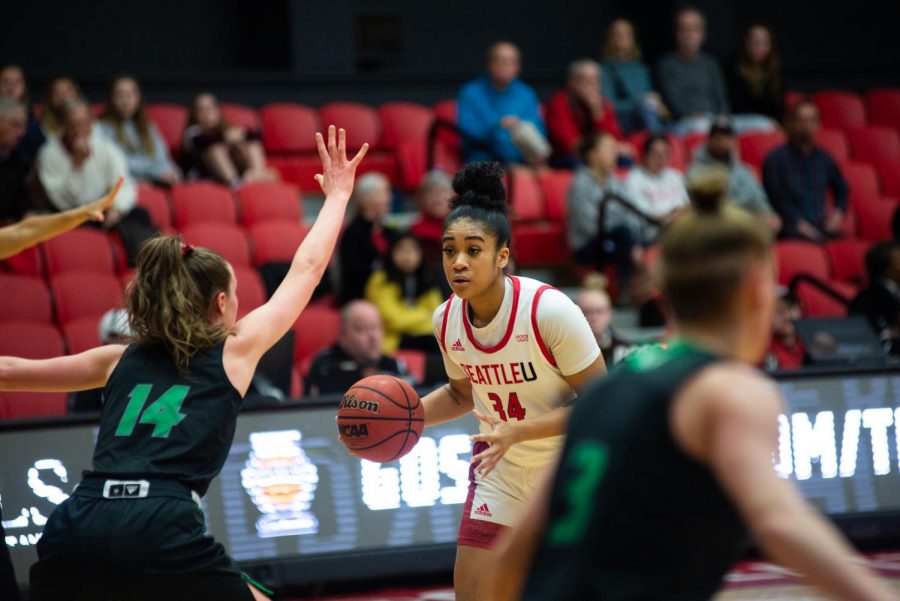 Chinwe Ezeonu faces off against Utah Valley’s defense at the Redhawk Center on Feb. 8, 2020.

Softball
The Seattle University Softball team competed at the Kajikawa Classic in Tempe, Arizona, against both Northwestern University and the University of Arizona.

The Redhawks held their own in both games, competing against two nationally ranked teams. With 13 strikeouts, Junior Shi Smith set a program record in the game against Northwestern. Senior Madison Cathcart also hit her 37th career home run, tying the game against Arizona (3-3) who are ranked fifth in the nation.

The Redhawks came close in both games, but were defeated with final scores of 0-1 to Northwestern and 3-4 to Arizona.

On Saturday, the Redhawks were defeated by the University of Kansas on the second day of the tournament. The final score was 8-0 in six innings.

Tennis
The women’s tennis team played University of Wyoming on Friday, Feb. 7 and lost 0-4. On Saturday, The Montana State Bobcats bested the Redhawks in a 6-1 victory.

First-year Jade Lancaster was a standout for Seattle U in the game versus Montana, reigning victorious in singles play with 6-3, 6-3 victories over Montana’s JJ Chen. Juniors Kyra Jung and Michelle Badar and Sophomores Alisa Sabotic and Martina Asciuto all took their opponents to a third set, putting up a fight against the Bobcats.

At the Idaho Team Challenge, two new school records were set. Senior Michelle Newblom broke her own school record in the 60-meter hurdles finals with a first-place finish of 8.91 seconds. Sophomore Regie Grady set a program record for the 200-meter dash, finishing second overall in a time of 25.59 seconds.

The distance runners competed just a day later on Feb. 9 in Portland. Senior Siobhan Rubio set a new facility record in the 800-meter run, crossing the line in 2:17.86 and finishing first overall. Sophomore Marie Therese-Chahrouri also bested her previous best in the 3k run by over five seconds.

Basketball
Women’s basketball played Utah Valley University at home on Saturday, Feb. 8 and won 82-80 even after trailing 15 points at half time.

Redshirt Sophomore Hailey Vice-Neat scored a three-pointer with just 5.4 seconds left in overtime. The close game came down to the wire, with Vice-Neat shooting two free throws to force overtime. The women’s basketball team will play New Mexico State on Feb. 13 at the Redhawk Center.
Men’s Week in Review

Tennis
The Redhawks were away this week, prepared for a full weekend of competition with two scheduled matches on Friday, Feb. 7 against Montana State and Sunday, Feb.9 against the University of Montana.

Unfortunately, the Redhawks lost both matches. The match finished early in favor of the Montana State Bobcats with a score of 4-0. Seniors Trenton Nield and Alex Chan came close to a win in doubles play, finishing 3-6.

The Redhawks’ match against University of Montana was cancelled for unknown reasons.

Track & Field
The team split up competitors this weekend with entries in two separate meets, the Idaho Team Challenge on Friday, Feb.7, while a handful of Redhawks stayed home and prepared for the University of Portland’s second indoor meet on Feb. 9.

In Moscow, Idaho, the men’s team set a total of 13 personal records and achieved several top eight place finishes. Notably, First-years Dominic Jacobs and Noah Payne took fifth and sixth place in the preliminary round of the 60 with times of 7.06 and 7.11, respectively. Jacobs not only made his Seattle U debut, but set a new personal record in the event.

Both made their way to compete in the finals, while Sophomore Lucus Milne also had a successful weekend with personal records in the long jump, shot put and the finals of the 60 meter hurdles, where he placed seventh overall in a time of 8.76.

In Portland, the Redhawks carried momentum into the distance events. Sophomore Ansel Pendley-Griffin posted a new personal record of 4:16.96 in the mile run, flaming on to take third overall at the meet.

Seattle University’s men are now ranked no.22 in the West Region.

The team has a short turnaround before their next two-day meet on Feb.14-15 at University of Washington’s Dempsey indoor facility. The event will begin at 2:00 p.m. on Friday.

Basketball
Seattle University traveled to Orem, Utah to face the Utah Valley Wolverines on Saturday, Feb. 8. The Redhawks came to dominate in the second round of the Western Athletic Conference (WAC) games.

The Redhawks were up during the first half, 40-36 and then down for the second half by just four points for a tie game of 79-79.

In the last 1.5 seconds of overtime, Senior Morgan Means hit a 2-pointer to wrap up the game in favor of the Redhawks. The final score was 87-85, marking the team’s 12th win of the season and putting them third in the WAC.

The Redhawks are geared up for their next two games coming up on Feb. 13 and 15 against New Mexico State followed by University of Texas Rio Grande Valley, where they look to continue their success and boost their conference ranking.