Black History Month Kicks off With Conversation About BLM 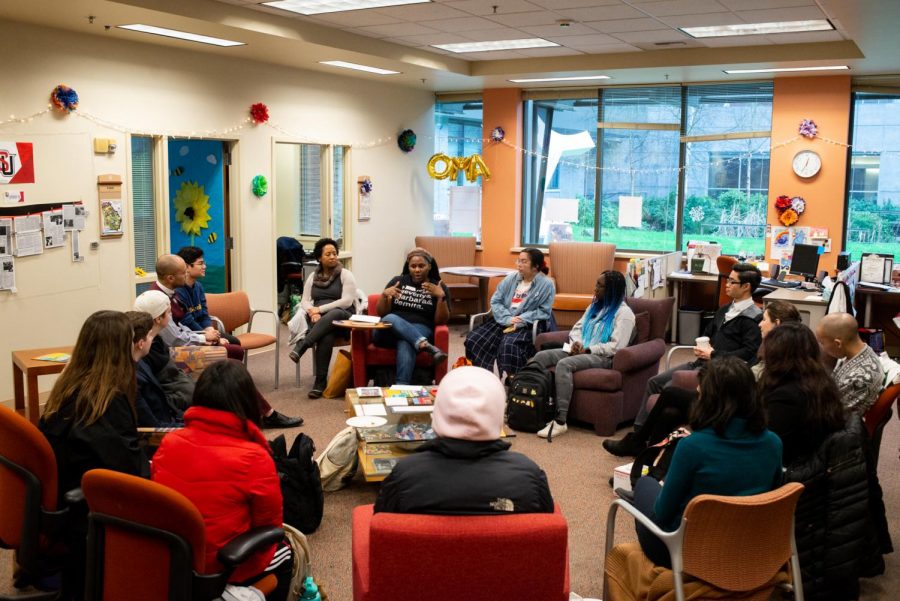 Ashlee Day, the assistant director of the Office of Multicultural Affairs, speaks to attendees on the importance of speaking out and using your voice.

February is upon us, which means so is Black History Month. We keep intentional remembrance throughout the entirety of February of the decades of vibrant and tragic history Black people in America have experienced and continue to experience in 2020.

To kick-off this paramount month, the Center for Community Engagement (CCE) teamed up with the Office of Multicultural Affairs (OMA) to host a Black Lives Matter discussion on Feb. 5. Ashlee Day, assistant director of the OMA, and Travis Kim, a CCE graduate assistant, co-led the discussion. The timing of the event combined the CCE’s Winter Wellness Week and Black Lives Matter in Schools week.

“As the CCE is committed to living and leading as an anti-racist organization, my colleagues and I thought it was important to have a program within Winter Wellness Week that involved a conversation around Black Lives Matter at Seattle University,” Kim said. “Keeping in mind that the schools in the Seattle University Youth Initiative are located in the Central District—a historically black neighborhood where families are now facing displacement and gentrification—we wanted to create a space for students to discuss, learn, and engage with the Black Lives Matter movement.”

Day and Kim decided to collaborate and put on an event that would base conversation around the 13 Guiding Principles for Black Lives Matter. They both agreed this was a solid starting point, but ultimately the conversation would be guided by the group of participants.

The couches and chairs set up in a circle in the OMA office space were filled with students, faculty and staff from different areas of the Seattle University community. Right off the bat, Kim asked the participants to shout out guidelines to establish community agreements that would be respected as the conversation progressed. Listening first, thinking before you contribute and “moving at the speed of trust” were some of the suggestions.

After a respectful plan was solidified going forward, Day asked the group to go around, introduce themselves and define what Black Lives Matter meant to them.

“I believe that it is important to have conversations about race, and particularly as a Black person, it is important to remember that racism isn’t over; anti-Blackness still runs rampant in our society and change is not going to happen if people are silent,” Day said. “I think for many, Black Lives Matter is just a hashtag that does not actually lead to actionable behavior in their day-to-day lives. However, being willing to talk about the Black Lives Matter movement and how we can align with the principles developed by Opal Tometi, Alicia Garza and Patrisse Cullors can help us move into taking action.”

The responses around the room were highly personalized, and many participants noted they had never been asked to define what the movement meant to them personally before.

The discussion broke into small groups and discussed which one stood out to them the most. Each small group had their own enlightening conversations for about 20 minutes, then were brought back into the large group to share. Black men’s mental health, the importance of Black women’s roles and the inclusion of queer and trans people were some of the main topics that came up.

Finally, the event leaders introduced an “I commit to …” activity ending in the words “Black Lives Matter.” The activity was a call to action on our part to take what we had learned and put it to practice.

“I committed to challenging any biases I hold regarding all communities, specifically the Balck community. I am in a sociology class that teaches about how stereotypes form at a young age, so navigating anything I learned growing up and unlearning those biases is important,” Andino said. “Especially understanding I am POC, as well, land face many of the same issues so why would I perpetuate the stigmas myself?”

Retraining thought processes and consciously being aware of seemingly invisible biases is a great place to start when combating the decades of mistreatment faced by the Black community. Continuing educationon the ingrained tenants of white supremacy as well as showing up, listening and believing Black experiences are seemingly small steps that, if done collectively, will eventually make a difference.

“I hope the people who attended the event have a better understanding of Black Lives Matter beyond the sensationalized news media or the ‘single story’ that they may have about what this movement really stands for,” Day said. “I also want people to realize that having conversations is just one part of the larger work that is needed to fight white supremacy in our world and that we all have to find ways to take action and commit to living out the Principles of Black Lives Matter.”

OMA is hosting more events throughout Black History Month. On Feb. 20, they are collaborating with Campus Ministry to discuss Faith and Politics. They also have a Moral Monday event, “Amplifying Our Experience: A Community Conversation on the Black Student Experience,” on Feb. 24 at 6:30.

According to Day, it is a real conversation about the current state of the Black community at Seattle University. They hope African/Black/African American students, staff and faculty on campus will come to share their thoughts, express their hopes and help brainstorm ideas for new programming and initiatives.