Antifa’s Banana Jazz Party, or What does the Militant Left Look Like? 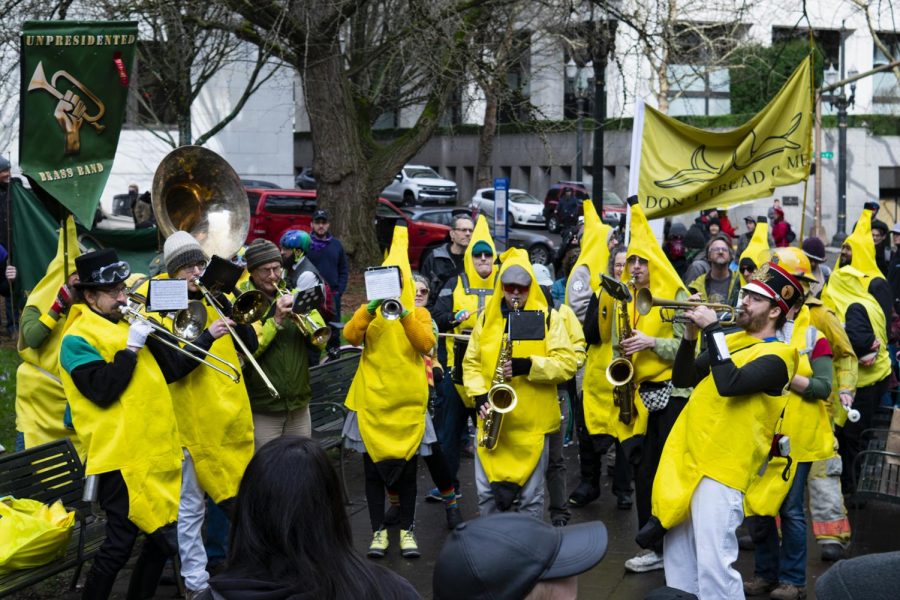 Banana Block playing New Orleans style jazz at the “kick the KKK our of Portland” rally on Feb. 8, 2020.

On the morning of Feb. 8, I had my doubts that there would actually be a KKK rally in Portland Oregon. The weather was too beautiful for such an ugly group to yell hate speech for an hour.

At 9:50 am, 10 minutes before the rally was supposed to start, the only gathering of people was a circle of nine unmasked Antifa members smoking cigarettes and listening to music. By 9:59 more Antifa members had shown up, but it had been announced that the Klan had officially cancelled their rally. More and more protestors and Antifa members continued to show up and there was some talk of the possibility of some rogue Klan members showing up. This did not happen. Instead, at 10:07, while the crowd was steadily growing but still small, three people in banana suits showed up. Why were they in banana suits? That was not answered. By 10:23, the scene was crowded and a whole marching band of banana suit-wearing musicians had shown up and proceeded to play New Orleans style jazz. The protesters, along with press photographers and passersby were enamored by the self-titled “Banana Block”.

The scene had gotten pretty weird. The park that had been empty roughly 30 minutes earlier had become a protestors social event, complete with a full band and photographers. It felt more like a house show than a gathering to “kick the KKK out of Portland” as the event was titled on the Rose City Antifa’s website.

In the midst of this strange madness I took a minute to really think about what was happening. A group that has promoted and participated in violent hate crimes and open racism to an extent that they define themselves with it, had planned to create a physical presence outside of a law building in downtown Portland. In response, a group of banana dressed people had shown up to peacefully protest against them by playing jazz.

I couldn’t decide how I felt about this. On one hand, the banana block is so ridiculous that their presence turns the situation into a joke. Their hypothetical plan was to meet the Klan with banana costumes and surprisingly well performed jazz. They were planning to drain out the Klan’s hate speech with trumpets, drums, tubas and other brassy instruments, which is admirable. They show the Klan a certain amount of disrespect with the lack of severity in their presence that I can appreciate. On the other hand, the Klan is quite serious. They are the embodiment of this nation’s national crime and to many people, the Klan is something that should be taken very seriously. Maybe they should not be made into a joke.

I will always side with Antifa over whatever right-wing group that they have decided to feud with, but overall, they seem more like a social group than an organized group of political activists and their ideology lacks conjunction. Are they peaceful? Are they social justice warriors? Are they the militant left? I don’t know. Are they, with their all black clothes, hidden identities, well-made signs, acts of vandalism and destruction, pubescent style taunting of the right and of course, banana jazz, making a positive change?