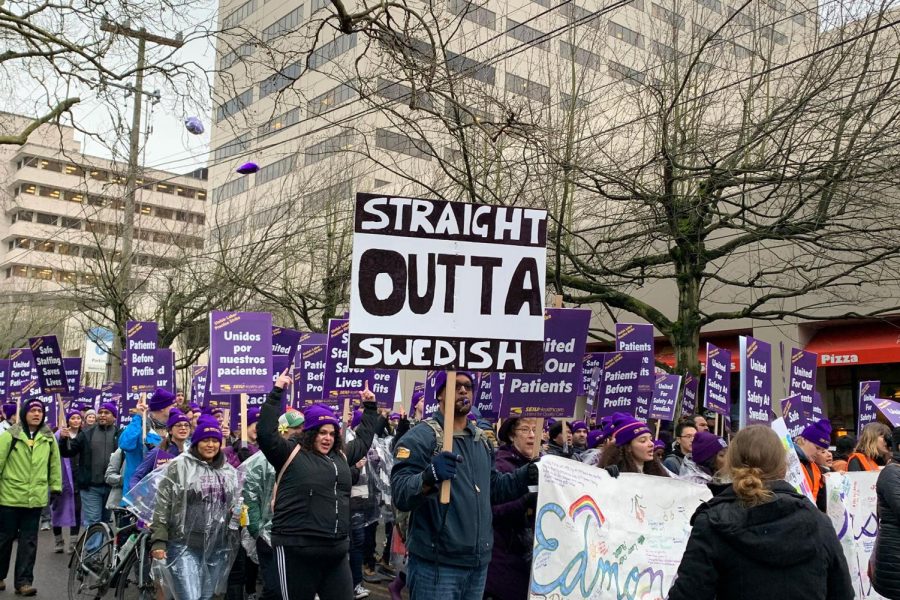 Demonstrations protesting poor working conditions on behalf of nurses at Swedish Medical Center made their way through First Hill as hundreds of nurses walked out of the hospital.

With chanting and live music ringing over campus this week, the Swedish Medical Center nurses and medical personnel were on strike. The Seattle hospital, located a block away from Seattle University’s campus, was involved in a major protest this week as hundreds of nurses walked out of the hospital on First Hill.

The protests began as a way for nurses to speak against poor working conditions that many of them face. Nurses at the hospital are upset that they have to deal with more patients and more shifts, without an increase in pay.

The largest question and concern is about where the money for pay raises will come from. The hospital currently pays out of pocket for nurses instead of through insurance, which is how doctors are paid.

Lilian Ortiz, a nurse at the hospital, explained why they felt like they were not getting compensated for the work they were doing.

“We are trying to stand up for everyone here, not just for us, but for our patients and for nurses everywhere,” Ortiz said. “It’s a tough job, a rewarding one emotionally, but it’s draining working two shifts back to back, and I think we should be paid in a way that respects that.”

This is due in part to the increase in demand for nursing services as the baby boomer generation ages. The protestors explained the increased demand for nurses but a shortage of them in hospitals means that they are unable to provide adequate care to all of their patients.

With many Seattle U nursing students working at Swedish or other hospitals in the area and preparing to enter the industry, many felt it was important to support the nurses in their strike. One such student, Rob Killian, a third-year nursing major, expressed his support for the nurses in what they were doing to get better working conditions, understanding the stress and struggle that they face.

“The more patients that the nurses there have, the less care that they can pay to any individual patient,” Killian said. “One nurse taking care of 10 people can do their job a lot better than one taking care of 20, so this is really about making sure that people are being safe as well.”

The strike ended after three days, but workers flown in to provide support for the hospital during the strike continued to work at the hospital for five days as per their contracts with Swedish. This left many of the protestors unable to go to work the next two days, with the hospital turning many of their regular workers away in favor of the workers that they had already brought in.

“The hospital has a job of caring for the sick, and I think the nurses understand that,” Killian said. “There doesn’t seem to be a lot of animosities out there, just people trying to get money so they can live in an expensive city and hoping to be fairly compensated for the hard work that they do.”

The whole area was not only a place of protest for the nurses themselves but a place for the city to show their support for the nurses and their fight for higher pay. The entire block was buzzing with extra picketing signs as well as cars honking as a show of solidarity with the striking workers. Jason Sharpe, a Seattle local, expressed his support for the strike and all it did for the nurses of the hospital.

“I walked by the strike yesterday and today and I just think that the energy that they have going here is so great,” Sharpe said. “I think that Seattle is a city that is strongly in support of collective bargaining so I think that the community here is just in huge support of the nurses and are really thankful for what they do.” The strike did not result in the nurses getting everything they wanted to get out of negotiations. Their new contract did include a pay increase of 11.25% which will be incorporated gradually over the course of the next four years. This is only about half of what the nurses were demanding when entering negotiations.