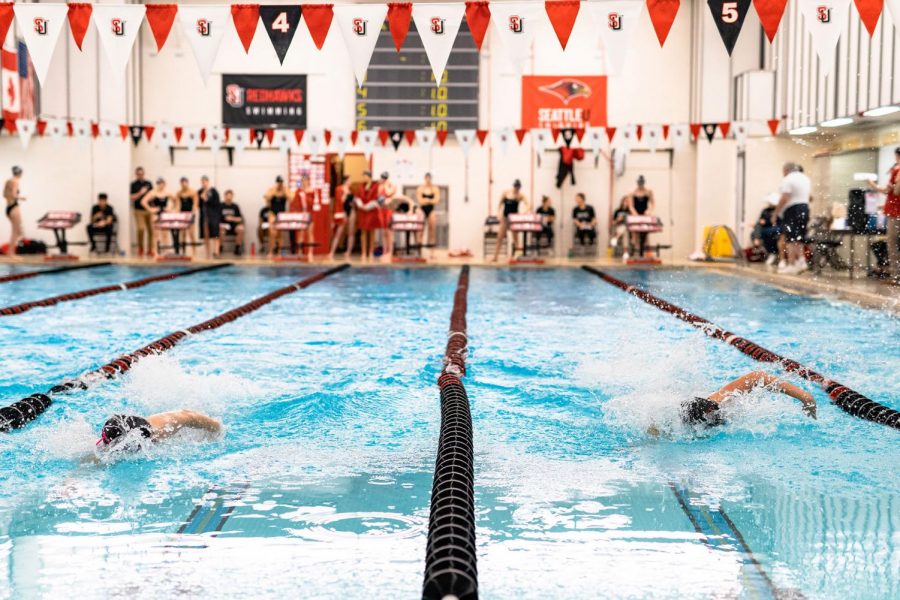 Seattle University Women’s Swim taking on the University of Idaho at the Red- hawk Center on Saturday, February 1st, 2020.

On Feb. 1, the Seattle UniversityTrack and Field team finished their third meet of the season at the University of Washington (UW) Invitational. The two-day competition ended with some formidable performances.

The Seattle U Track and Field team will be back in action at the Idaho Team Challenge on Feb. 7.

Seattle U Women’s Swimming wrapped up their season last Saturday at the Redhawk Center against the University of Idaho Vandals. The Redhawks lost overall, but won five individual events.

Junior Bryn Lasher led the team with a notable performance in the 200-yd butterfly, finishing the race in first place. Juniors Sherlyn Devadason and Tessa Oliver followed Lasher with respective times of 2:09.15 and 2:11.13.

Junior Allison Plamondon also excelled in her race, as she won the 50- yd freestyle before earning a second place finish in the 100-yd freestyle with a time of 53.07.

The Redhawks will have about three weeks to prepare for the Western Athletic Conference (WAC) Championships, which will be held Feb. 26-29.

The Redhawks also performed well in the doubles play, which helped them achieve the overall victory. The team will be back in action on Feb. 7-8 in Bozeman, Montana.

Seattle U Women’s Basketball claimed an 83-49 win at California Baptist University, establishing the largest margin of victory in Seattle U history.

The Redhawks dominated the game on Saturday night with a 51-percent shooting rate and put the home team in a defensive situation. During the game, Senior Kamira Sanders accompanied Sophomore Chinwe Ezeonu in creating offensive plays. Sanders also scored 12 points for the team and got six assists. Senior Joana Alves added 18 more points for the Redhawks.

Seattle U will return home for a game against Utah Valley University on Feb. 8.
Men’s Week in Review

The Redhawks were back in the Seattle area once again at the University of Washington’s Dempsey indoor facility for their third meet of the season.

The University of Washington Invitational was the first multi-day event the Redhawks have competed in thus far, with day one underway on Jan. 31 followed by day two on Feb. 1 beginning at 10:00 a.m.

This Invitational was fairly large and competitive as Pacific-12 Conference teams as well as a number of other collegiate programs from all over the country attended. With high entry standards, 17 athletes from both the men’s and women’s side of the Seattle University team competed—with many setting new personal records.

Kicking off the meet with a great start was Sophomore Lucas Milne in his second attempt at the 60-meter hurdles with a time of 8.83 seconds— just .1 seconds from achieving the school record.

Payne placed seventh overall and first in his heat with a time of 22.13, while Sophomore Zach Gonzalez also placed first in his heat and landed an impressive finish that dropped half a second off his personal best time in the 400-meter dash.

Another personal record took place in the mile, with Sophomore Ansel Pendley-Griffin running a six-second improvement . To wrap up the good weekend, Junior Nathan Pixler placed first in his heat in 800-meter run, posting a time of 1:53.94—only .7 seconds from his own school record.

The Redhawks look to continue to impress in Moscow, Idaho on Feb. 7 at the Idaho Team Challenge Meet as they prepare for the Western Athletic Conference (WAC) Championship, set to take place in late February.

The Redhawks fought hard this weekend against California Baptist University on Feb. 1, but just fell short of a win. The final score was 72-65 at the home game, which took place at the ShoWare Center. The Redhawks found themselves at a tie twice throughout the game, but it was not enough.

The Redhawks have their next game in Utah against WAC rival Utah Valley University on Feb. 8.