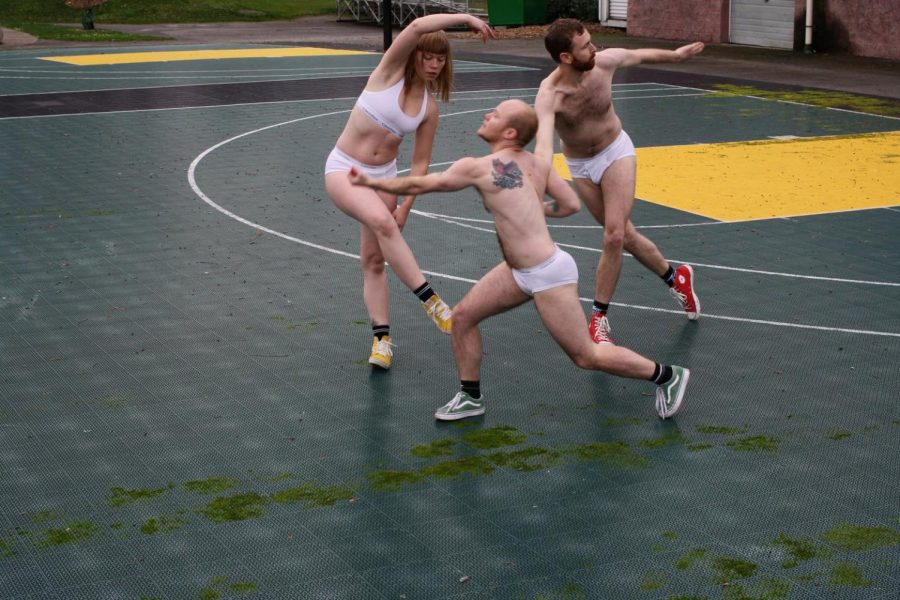 Courtesy of The Seattle Times

Brosch, Donohue and Macintosh-Houghham performed the show in their under- wear. The visibilitiy of the dancer’s bodies was an important element of the show for Brosch.

Upon entering Washington Hall, audience members for “Drama Tops, this is for you” are greeted by a mocktail bar, selling two drinks: “Tangy Tops” and “Bitter Bottoms.” An alliterative joke about sex positions, signaling and gay club culture, the message is immediately clear to queer folks: this is for you.

Elby Brosch, the creator, director and choreographer of the show, is a transmasculine dancer who sought to explore the layers of masculinity, and how they interact with his own gender. The show featured two other dancers— Jordan Macintosh-Hougham and Shane Donohue. Together, the three call themselves “Drama Tops,”a dance group that performs modern dance and ballet.

While on stage with Donohue, a cisgender man, Brosch explored the masculine ideals he feels called to embody, whereas Macintosh- Hougham, a non-binary dancer, symbolized his upbringing and socialization. In their dances together, Brosch and Macintosh-Hougham explored misogyny as well as the transphobia that they both face.

Brosch said that there are three elements of his gender that he explored in his work: first, having a body assigned female at birth, second as he was “going through the transition, being a body that people could not quite locate,” and third, how he navigates gender expectations as a passing transmasculine person.

Over the course of the show, the dancers moved with or without music, performing intricate and physically demanding poses and movements. These included imitations of exercise—a call-out of workout culture and objectification of bodies—as well as movements of celebration, physical touch and fighting.

In these duets, Brosch challenges traditional toxic masculinity and how it harms those who are men, as well as those who aren’t men. In a particularly emotional moment of the show,

Brosch and Donohue fight with each other and then stand in silence. “I’m tired,” Brosch repeats while they both gasp for breath.

“There’s all these different layers of expectations and norms and standards. And trying to look at those and look at the desire to achieve them and the frustration to not be able to, the push-pull of the longing,” Brosch said. “The moments in which you’re really successful at achieving those standards can feel so intoxicatingly good, but then the moments where you fail are just so devastating.”

During the show, all three dancers wore minimal clothing—in the beginning, they wore nets over their torsos, but they took off their tops halfway through to perform only in underwear. The nets, made out of the nets of lacrosse goals, were symbolic of the “toxic sports man,” while also recalling the mesh tops that can be found in any gay club.

For Brosch, the uncovered body was central to the dance performance.

“We’re exposing our transness, honestly, and seeing the differences and similarities between mine and Jordan’s bodies and mine and Shane’s bodies, and how my body is kind of an interesting combination of both of theirs,” Brosch said.

Further, Brosch sought to engage with gay masculinity, as well as heteronormative masculinity. He did so by emulating the gay mesh shirt, but also through his use of music. At one point in the show, the speakers played the song “Grow a Pear” by Ke$ha, a pop star who is beloved by many members of the queer community.

As Brosch and Donohue danced around in circles, beaming and giving high fives to the audience members, Ke$ha sang, “I just can’t date a dude with a vag,” and “I signed up for a man, but you are just a bitch.” Following a few laps around the audience, Donohue violently threw Brosch to the ground—he laid on the floor while Donohue continued to dance around the audience.

In that moment, the funny, pop- filled dance scene turned somber and exposed the violent toxic masculinity and transphobia that runs rampant, not only through the actions of cis men, but through the music and culture of women and the queer community, as well.

Using pop music like Ke$ha’s song, as well as through his use of humor and irony, Brosch also aimed to make his show more approachable and to “lean into drama and camp.”

As a queer show, the show was clearly influenced by camp and drag. With a giant pink neon sign that said “this is for you” over the stage, a dance to Enya’s iconic song, “Only Time,” and other over-the-top stylistic decisions, the audience laughed at the deliberately corny and ironic choices.

Brosch said that he dances for his co-director BenDeLaCreme in drag shows, and he said that drag is his favorite art form. As a result, he incorporated some of its style into this show.

“Ben does a really good job of taking an idea that’s either really complicated and layered or very deeply emotional, and then covering it in glitter and fun,” Brosch said. “You laugh the whole time and have an amazing time and then by the end you’re like, ‘Oh shit, I felt something,’ or ‘Oh shit, I learned something. I thought about something in a completely new way.’”

In exploring masculinity, Brosch wanted to tell a story of the ways that he’s been hurt by toxic masculinity, but he also wanted to explore a more tender side of how masculinity can be beautiful and empowering.

“Right now we’re really talking about masculinity culturally and it’s getting a really bad rap for a lot of really good reasons. But I don’t think the answer is to throw away all aspects. I think the answer is to own into the beautiful ways that masculinity can be generous and stable and strong and productive and all these positive things as well.”

Josh may be reached at [email protected]