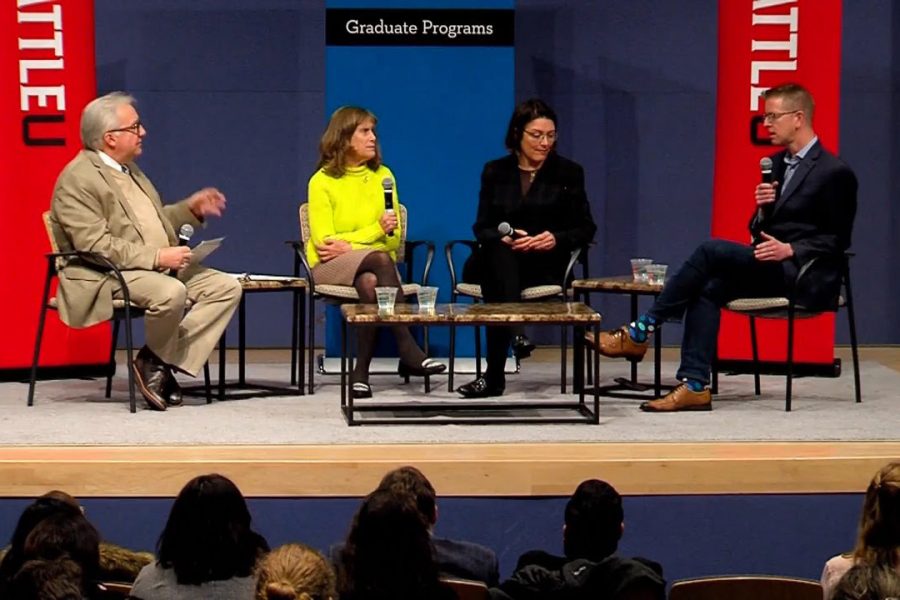 On Jan. 21, Representatives Suzan DelBene and Derek Kilmer spoke on the Seattle University campus regarding impeachment and the challenges of bipartisanship, and clarified some of the red tape that clouds the process. Following the impeachment of US President Donald Trump, it has become apparent that the rare and complicated process that is impeachment is best described by those on the front lines. With only three presidents in history to be impeached, the process is unknown to many.

Representatives DelBene and Kilmer are both democrats and both voted to impeach Trump. Both stressed the gravity of their decision and its importance in intense political times to preserve the rights of Americans protected in the Constitution and to protect the necessities of their constituents.

“I feel the president has abused power, he has gone against his oath, betrayed his oath to the constitution and to the American people and he has obstructed congress,” DelBene said. “We never go to seek office thinking we’re going to be involved in impeachment; it is a very sobering and sad time for our country…I don’t think I could look at myself in the mirror if I hadn’t taken the vote I had because I think the evidence is very clear.”

Kilmer agreed with many of DelBene’s points regarding their historic votes, adding overwhelming information and analysis on behalf of constitutional scholars and third party analysts that helped inform his vote.

“I don’t think any member of congress shows up to impeach the president… And yet, the very first thing I do in this job, is raise my right hand and swear to uphold the constitution,” Kilmer said. “That doesn’t mean when it serves my political interest, it says I will uphold the constitution. As you looked at the fact base that came out during the impeachment inquiry, I thought the evidence was very overwhelming on two fronts.”

Kilmer went more into detail on these two points. One, that the president asked a foreign government to dig up dirt on his political rival which is an abuse of his office. Second, that he persistently obstructed congress in that investigation into that first act.

Three Republican representatives were invited to the event but were unable to attend. DelBene and Kilmer did, however, highlight the bipartisan work between both parties—even in the absence of republicans. Commenting on historically partisan issues—specifically health care and climate change—the representatives spoke specifically to the issues of healthcare and climate change the audience on how much work is currently being done from both sides of the isle, including areas still needing attention.

Svetlana Sohoni, a first-year political science major, attended the talk, and resonated with the actions taken on behalf of the representatives to reach across the aisle and make real change.

“Clearly, there’s been a very strong divide between democrats and republicans,” Sohoni said. “Even though they were both democratic, they had a very open view on trying to find common ground with republicans and they had lots of examples on ways they’ve been able to do that. For example, the bill that he [Kilmer] came together to create with a Republican in the State of Washington that helped indigenous coastal communities.”

The historic role both representatives played in this process resonated with Nikki Wisemore, a second-year political science major.

“Those people voted on the impeachment so it was kind of a reality check that these are actual humans who are real and did something super historic out of a sense of duty and not out of a sense of political means.”