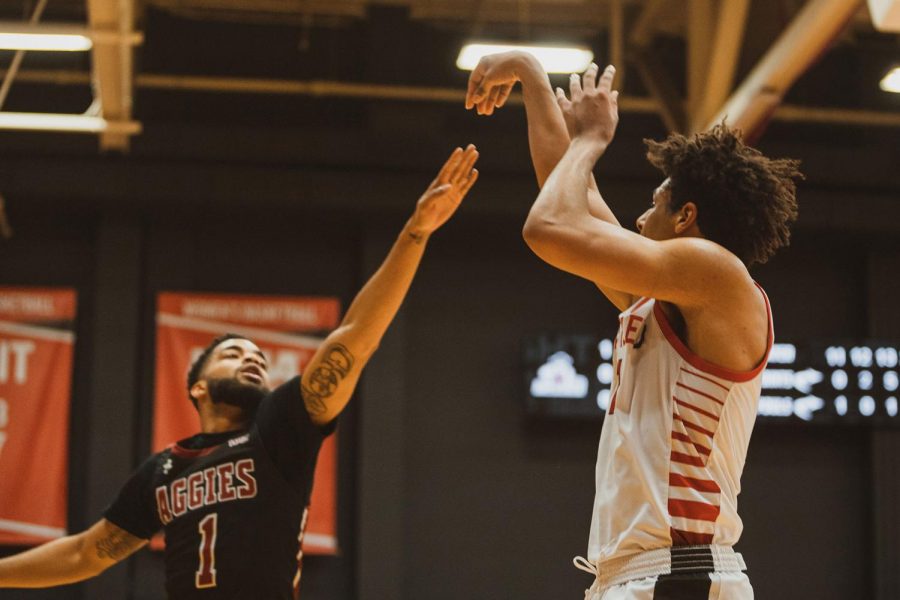 The Seattle University’s Women’s Swim team travelled to Colorado Springs, Colorado to face off against Air Force and the University of Northern Colorado. In the duel against Air Force on the first day, Senior Jayna Van Stone secured a first-place finish in the 200-yard freestyle with a time of 1:59.02.

200 breaststroke in a time of 2:24.99. On the second day, Himes was the only individual from Seattle U to make the podium for her effort in the 200-yard medley with a time of 2:13.18. The 200-freestyle relay team composed of Van Stone, Senior Julia Gorman, First-year Audrey Dixon and Junior Allison Plamondon took third in 1:41.30. The next meet for the Redhawks will be on Feb. 1 at home versus Idaho.

Grossman came back for doubles play with Sophomore Martina Asciuto, but unfortunately the two did not win their match up against the Cougars—ending with a score of 1-6.

The Redhawks will match up against boise State in Eagle, Idaho on Jan. 24.

Track and field opened their indoor season locally at the University of Washington on Jan. 18.

The sprints team had a successful day as Senior Siobhan Rubio ran a personal best in the 400 meter sprint with a time of 59.58 and Senior

Michelle Newblom flamed on to a time of 8.99 in the 60 meter hurdles. The distances saw equal success, with First-year Delaney Griffin running 5:10.29 in the mile and Redshirt Senior Olivia Stein running 10:13.18 in the 3000-meter race. The team is scheduled to compete in Portland, Oregon on Jan. 25.

Notable performances at the Redhawk Center helped the Seattle University’s Men’s basketball team claim a 91- 74 win over the University of Texas Rio Grande Valley (UTRGV). It was the third victory in a row for the Redhawks in the Western Athletic Conference (WAC) competition.

Redshirt Senior Morgan Means was the star of the night. He scored 22 points and got four assists to lead the team. Sophomore Riley Grigsby and Redshirt Senior Delante Jones followed close behind, adding 32 points total to the final score.

The basketball team continued their week with a battle against visitor New Mexico State University (NMSU). The Redhawks fought hard during the game, but ultimately fell short to the visiting team in a final score 75- 67. Although the Redhawks could not continue their victorious streak, Redshirt Junior Terrell Brown flamed on with 25 points scored and five assists.

Basketball will be back with an away game against Grand Canyon University on Jan. 23.

Seattle University Men’s Swimming had a tough head-to-head competition against Air Force. The Redhawks ended up falling short to the Falcons, with a final score of 135.5-65.5. Despite the result, the Redhawks saw notable performances in the two-day competition.

Sophomore Juan Varela started strongly for the team when he ended his first day with a second-place finishing on 1000-yard freestyle. In the 200-yard freestyle, First-year Connor Barringer claimed third place. Following him, Senior Ryan Shaw also got third place in 200-yard backstroke.

They will conclude their regular season on Jan. 25, where they will host Simon Fraser University.

The Seattle University Track and Field team kicked off their 2020 indoor season at the University of Washington Indoor Preview on Jan. 19. The event was the first meet for new Seattle U athletes and the start of a new year for familiar athletes who made their debut.

In the 60-meter dash, Sophomore Isaiah Payne finished 13th in the qualifying round with a time 6.99, setting a new personal record and missing the school record by only 0.07 seconds. Payne also finished t10th place in the 200m dash.

Sophomore Stewart Keene and Senior Steve Brown made their season debuts in the 400-meter and 600-meter runs. They finished in 53.42 and 1:28.74 respectively.

The meet was also a first for First-year Lance Mason, who finished the 800-meter run with a personal best of 2:01.49. The Redhawks will face their next competition at the University of Portland on Jan. 25 and 26.