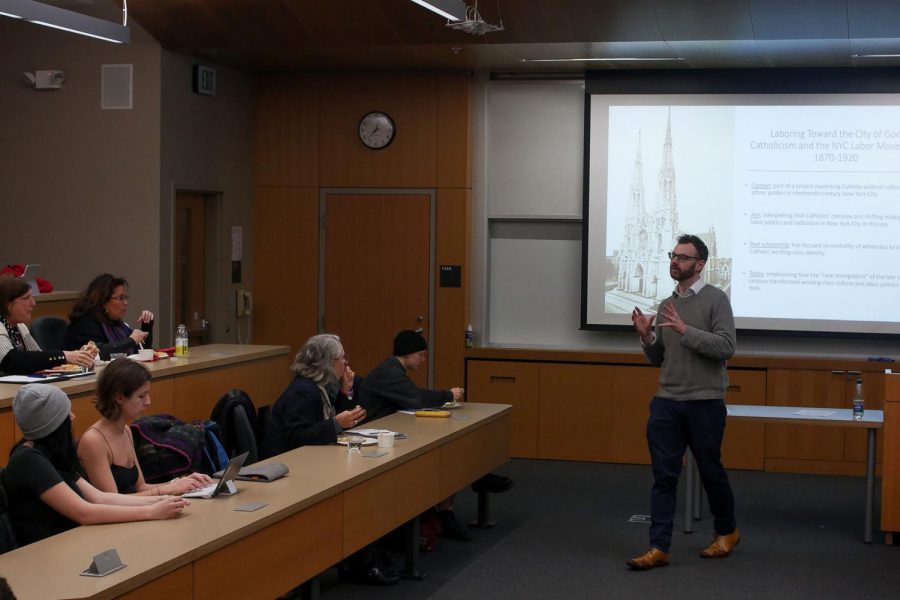 Patrick McGrath, professor at Hong Kong University, speaks on the Catholic-Irish tradition and the way in which they came to be associated with conservativism.

On Jan. 14, Patrick McGrath visited Seattle University from Hong Kong University to share a lecture entitled “Laboring Toward the City of God: Catholicism and the Shaping of the NYC Labor Movement from 1870 to 1920.” The talk illustrated the unique roots of the early 20th century workers movement and explained how Irish-Catholic Americans went from reliable tenants of working-class politics to conservative mainstays.

Labor rights are still at the forefront of Seattle’s politics. On Jan. 13, two bills of a legislation package entitled the “Clean Campaigns Act” were passed unanimously by the Seattle City Council in response to the unprecedented levels of political donations by large companies like Amazon in the 2019 local elections.

Council member Tammy Morales won her seat in 2019 on phrases like “democratizing wealth, power and resources.” Kshama Sawant, another Seattle council member, has become a symbol for the rights of workers in the age of tech giants in the emerald city.

Students at Seattle U are engaged in these questions as well. Several students attended the talk and brought their own perspectives, including Natalie Kenoyer.

“The beginnings of the labor movement…remind me of Starbucks’ union policy today. If you mention unions, you’re fired” Kenoyer said.

The labor movement, while it may currently be powered by an amalgamation of intellectually, religiously and ethnically diverse individuals, has not always been that way. In fact, the late 19th and early 20th centuries are a great example of a significantly different group of Americans rallying for the rights of the producer.

McGrath’s research aims at “Interpreting Irish Catholics’ complex and shifting relationship to labor politics and radicalism in New York City in the 19th century.” To McGrath, understanding the changing labor tides from 1870 to 1920 concerns analyzing migration trends, ensuing ethnic tensions and the theological— or philosophical—outlook of the laborers themselves.

The lecture first chronicled the rise of Irish Catholics in New York from 1830 to 1860. During this time, the “famine generation” came to occupy several neighborhoods in New York City. Irish Protestants who were already living in New York were uninterested in co- mingling with these new immigrants. Irish Protestants dissociated with their ethnic identity, as the word “Irish” became synonymous with the working-class Catholics that were an increasing presence in the city.

The American Civil War engrained Irish-Catholics within the larger culture. While Ireland was struggling for independence “back home,” the republican (as in the ideology, not the party) values of independence and freedom in the United States served as a source of inspiration. Fighting for the Union contributed to the Irish- Catholic identity in the United States.

These Catholics became a significant majority within the labor force. By 1870, nearly 80% of New York manual laborers were Catholic. A shared heritage and religious community created some of the first large labor organizations in NYC. “The Knights of Labor” was an Irish-Catholic fronted group with a diverse pool of members. They were committed to the values of democracy and individual agency that inspired the Irish Americans that fought in the war, and argued that those values were incompatible with the exploitation of workers.

In 1886, a groundswell of Irish- Catholic support for the mayoral campaign of Henry George, a supporter of heavily restructuring the economy, spooked the New York elite. The Irish World and American Industrial Liberator, founded by Irish- Catholic Patrick Ford, was even getting into squabbles with the Catholic church elites about purchasing Alfred Nobel’s new invention dynamite to fight the British for independence back in Ireland. It seemed that the labor movement was radicalizing and that Irish-Catholics were going to be the harbinger of a mass-movement for economic rights that could topple the establishment.

Then, that did not happen. McGrath attributes this to the “new immigrants.” “In 1878, anti-socialist legislation passed in the German empire [caused] socialists to relocate to New York,” McGrath said.

Political turmoil in Russia and Italy also sends Marxists, Anarchists, and Yiddish Jews to the lower east side. By 1900, there was a drastically different group of immigrants from eastern Europe in the city who held suspicion toward institutions like the government and the church— both of which the Irish had positive experiences with.

Marxists, who believed religion was the opiate of the masses, were becoming the leaders of the labor movement. Italians understood the Catholic church as the state-sponsored organization that oppressed the needy, whereas Irish immigrants knew the Protestant church as the instrument of government repression.

Ethnic and religious divisions caused a significant change in union culture at the beginning of the 1900s. McGrath’s findings come at a time in which labor rights are again the topic of a young century. Whether the past will repeat itself is up for debate, but there is no doubt that McGrath’s research is thought provoking