Seattle Can Have a Little Snow, as a Treat 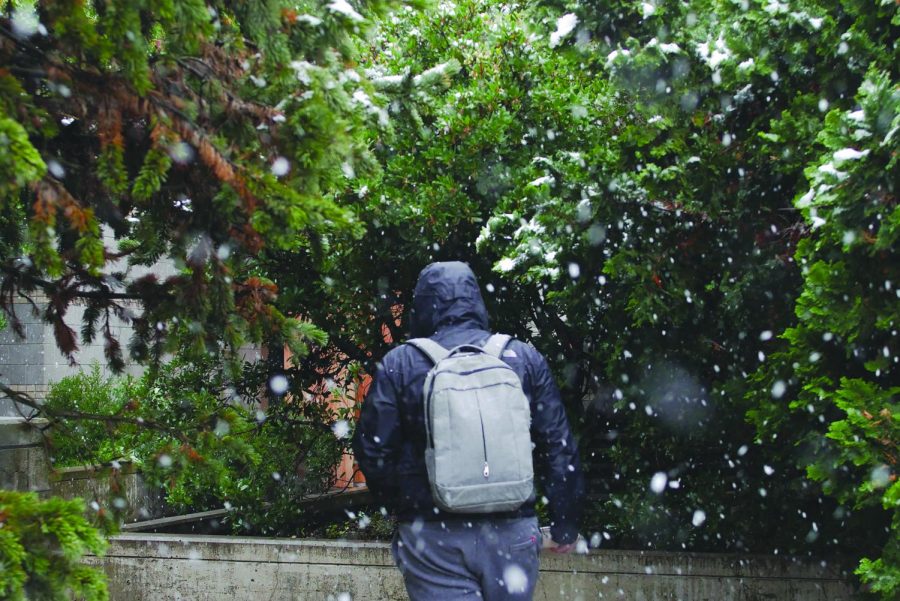 A student makes their way across a snowy campus.

Last academic year, February was the snowiest month Seattle has seen in the last 50 years. According to the KomoNews forecast, Seattle will get more cold in the upcoming week and the freezing weather can come with snow as a consequence.

Last year, the long-lasting snow conditions effectively shut down the campus for an entire week. Many mid- term examinations were turned into take-home exams or simply postponed.

Commuter services were also delayed because of the weather conditions. Se-Yeun Lee, civil and environmental engineering instructor, said that she would be prepared for the snow, but she also admitted that the snow would affect her teaching plans. Lee also spoke about the connection between the snow and climate change.

“I think there is a very weak link between climate change and the increase in snow or the timing of the snow,” Lee said. “But there is a high link from all the snow melting and the climate change.”

Lee said she was warned by the Dean of the College of Science and Engineering about how to tackle coursework during snow days.

“This morning [Friday, Jan. 10], I got the email from the Dean of the College of Science and Engineering, and we were asked to prepare school closure due to the snow. In that case, we’re giving out assignments to students since they can’t go to class.”

Elsewhere on campus, Chartwells has promised that they will try their best to serve the community in the snow days. “Based on the contingency plan, we are pretty confident that we could open up at least a couple of service plans. If not, just the row,” Resident District Manager of Redhawk Dining Terry Conaty said. “In the Cave, there are new hot food options and we have all the necessary equipment to service a full menu.”

Conaty said that in the case The Cave cannot receive new shipments because of road closures, dining services should have enough food in storage that to last for up to a week. Some people may feel negatively about the snow, especially when this weather conflicts with their study plans. Others, however, think differently—Kauser Gwaduari, the graduate assistant at the International Student Center, said that she was excited for snow and winter in Seattle.

“Winter back at home for me in Florida, particularly in Orlando is not like winter here in any way shape or form,” Gwaduari said. “Our winters in Florida are about the same as summers in Seattle.”