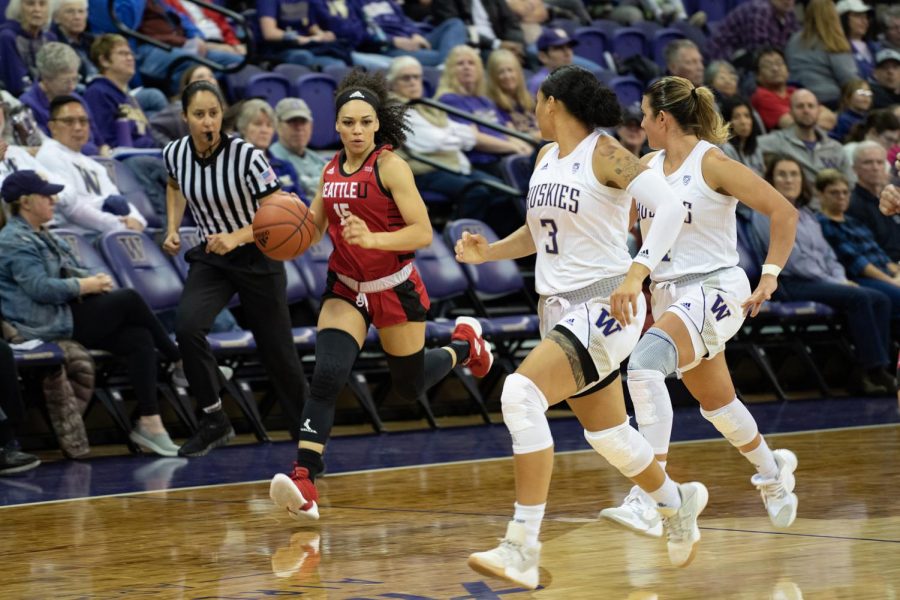 Kamira Sanders runs down the court in the fight against UW on November 23, 2019.

The Seattle University Women’s Basketball team took on the Idaho Vandals at home on Wednesday in a non-conference double-overtime game. The thrilling match ended with an unfortunate 90-84 loss. At halftime, the game was tied at 30 points and continued this way until the second extra time.

As the game headed into overtime, Fourth-year Olivia Crawford scored, bringing the team to a lead, followed up by Second-year Courtney Murphy’s three-pointer.

On Nov. 23 at Alaska Airlines Arena, Redhawks basketball took on the University of Washington (UW) in a non-conference game. While unfortunately the women fell in the second half—ending with a 78-46 point game—many individuals had a successful showing. With a total of 13 points, Second-year McKenzi Williams led the Redhawks in scoring against the University of Washington and First-year Makenna Schoenhofer made her debut.

On Nov. 26, the Seattle U Women’s Basketball won in a home game against the Central Washington Wildcats. Though the first half started out as a bit of a challenge, the Redhawks pulled through in the second, scoring a total of 51 points. The non-conference game ended with a 75-65 win for the Redhawks.

On Saturday afternoon, Nov. 30, the Redhawks took on Montana State in a non-conference game at home. While the Redhawks stayed strong and held the lead in the first half, the visitors caught up during the second and third quarters. Falling short, the fourth quarter ended with a 73-65 point game.

The Seattle U Women’s Volleyball team competed in the Western Athletic Conference (WAC) Tournament this week in Orem, Utah. With a successful season in the books, the team fell 3-1 to Kansas City, who was seeded third in the conference.

The game marked the seventh-consecutive season that the Redhawks qualified for the WAC tournament, finishing their season overall 13- 18. Some notable mentions include First-year Ezgi Ozkan, who broke the 30-assist record for her 15th time with 34 in the final match, Third-year Rachel Stark, who had 11 digs and 10 kills along with her eighth double-double this season, and Second-year Eve Kerschenbaum who earned her team’s best in 15 kills in the final game.

The Seattle U Women’s Swim team won their meet against the Puget Sound Loggers, finishing with a 142-118 win. The Redhawks earned a total of six first-place standings on Saturday.

The most notable performances of the day came from First-year athletes Caitlin Caruso and Audrey Dixon and Third-year Bryn Lasher in the 1000-yard freestyle and 100- yard breastroke. With this successful win, the women’s swim team will be preparing for their upcoming Husky invite on Dec. 6.
Mens Week in Review: Soccer Just Falls Short, Ends Season

The Seattle University Men’s Soccer team played Loyola Marymount University (LMU) on Nov. 21 and won in a final score of 3-1. Connor Noblat, Jesse Ortiz and Harrison Kurtz all scored to end the match two goals ahead of the Lions, leading them to round two of the NCAA championship tournament.

After a tie for the majority of the game, the Redhawks came back with a much stronger second half. Seattle U’s win marked a 15-game unbeaten streak. The win also marked the second longest winning streak in the division—only behind Missouri State—who had an unbeaten streak of 19 games.

After this 14 game winning streak, the men’s soccer team ended their season Nov. 24 at Stanford, where the two teams met for the first time. After a scoreless first half, the game went into double overtime and ended one of the strongest seasons in Seattle U history. The game ended 1-1 in a draw, however, Stanford advanced in the tournament through penalties.

The Seattle U Men’s Basketball team lost against the University of Mississippi on Nov. 19. They ended the game 13 points behind Ole Miss, with a final score of 52-65. Ole Miss was able to ride a first half lead through the end, securing them a victory. Junior guard Terrel Brown led all scorers with a total of 17 points.

The Redhawks also played Bucknell in Orlando, Florida on Nov. 25 at the 2019 NIT Season Tip-Off Orlando Subregional. The team lost in a close game, with Bucknell finishing just seven points ahead in a final score of 70-77. With one of their strongest first halves yet, the Redhawks were led by Brown, who scored 29 points in the first half.

On Nov. 26, the team rebounded with a win against Western Michigan University, also in Orlando, finishing 59-55. Senior Morgan Means reached 1,000 points for his career against Western Michigan. Means hit exactly 1,000 points when he drained a three- pointer in the second half after scoring three points in the first half. The game also marked Seattle U’s fourth game in 12 days on the road.

On Nov. 30, the Redhawks played the University of Idaho Vandals at home. The home court advantage paid off in favor of the Redhawks, as they finished the game with a 19-point lead and a final score of 74-55.

This is the Redhawks’ fourth win of the year, and they will play again at home on Dec. 3, hoping for another home win against Incarnate Word.

The men’s swim team was scheduled to swim at Puget Sound on Nov. 23, but the meet was cancelled. Look out for a reschedule date on goseattleu.com for updates on the meet between the Loggers and the Redhawks.