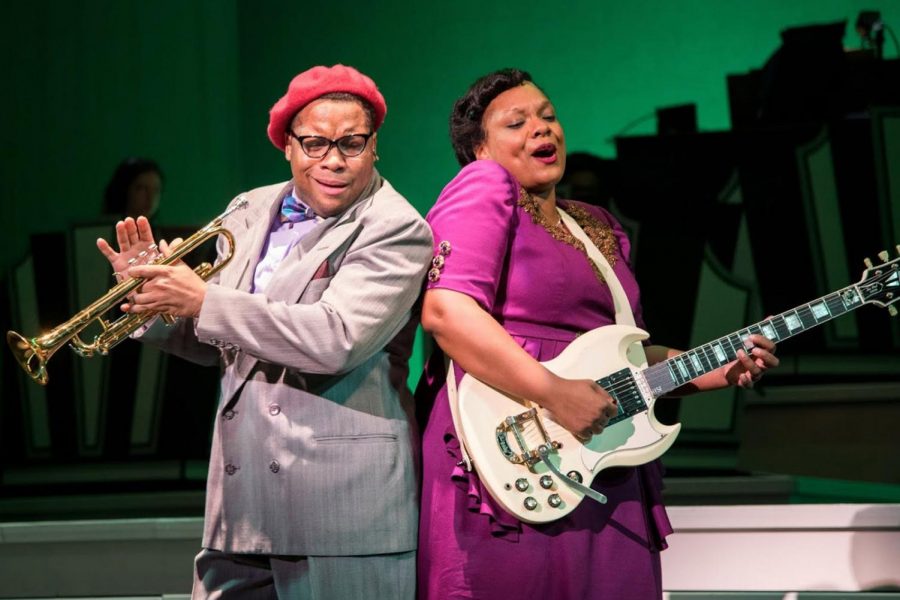 “Shout Sister Shout” at the Seattle Repertory Theatre is undoubtedly the most impressive jukebox musical to grace a Seattle stage in years. In a near-flawless production, playwright Cheryl West’s musical comes to life with a raw energy and brilliance worthy of the singer whose story it recounts: Sister Rosetta Tharpe.

The jukebox musical as a format is simple enough. Playbill acknowledges jukebox musicals as shows that “feature pre-existing scores by some of music’s greatest icons.” From “Mamma Mia” to “Jersey Boys,” they’ve served as a conduit for resurrecting under-appreciated work and showcasing beloved tunes.

In a public Q&A with West on Thursday, Nov. 14, the playwright stated that the play has been in development for years.

“[The Seattle Rep] is my home theater. I came and said, “I have this project, I think I know how to fix it,’” West said.

Whatever kinks needed to be smoothed out were clearly achieved.

The musical chronicles the story of Sister Rossetta Tharpe. how she rose with inspiring grit, and subsequently how little she was credited and appreciated by mainstream American audiences once the sound she created was capitalized by white culture with more sanitized leads.

“Sister Rosetta became famous in 1938 with a record called ‘Rock Me.’ She was a star throughout the 1940s, a black woman singing gospel music to the accompaniment of her own electric guitar…by the early 60s, the musical revolution she inspired had forgotten her,” according to The Rock and Roll Hall of Fame.

While the structure of the rise and decline of an artist interlaced with their greatest hits isn’t new, how it is filled out and addressed by the script and cast is revolutionary. Tharpe’s convention-defying story is given new life.

Carrie Compere plays Sister Tharpe in outstanding fashion. West clearly loves Thapre, and gives the actress who plays her a tall list of demands. Compere portrays Tharpe from her teenage years until the artist’s death.

The character of Tharpe embodies the vibrance and wit of an excited young talent, the pain and longing of a broken-hearted woman who has spent years on the road, and the tired wisdom of an old woman who has lived a trying life. Her voice charismatically carries the deepest lows and sharpest high notes. Watching her dance, handle comedy and tragedy in equal measure, and sing the majority of the musical’s two hours of songs is immensely impressive.

Compere is a true professional who doesn’t just succeed in her demanding role, she thrives in it. Her impressive list of credits that span from television and film to Broadway illustrate that she is a talented performer. Her role in “The Color Purple” may have informed some of the brilliance and vulnerability of her current character work, and it shows in her performance. The entire production is a triumph, but it all rests on the playwright and star, both of whom excel.

Once she’s hit the road as a popular artist, Tharpe tangles with a country and an industry built for individuals who are the exact opposite of her: white, male and straight. When conversing with Dizzy Gillespie, played delightfully by Chaz Rose, Tharpe voices sadness that, though white audiences embrace her on stage, she can’t find a hotel that will take her after she struts off stage.

Her relationship with her first husband is marred by misogyny and abuse. She struggles to forge a lasting bond with Marie Knight in the face of an overwhelmingly prejudiced society. Watching Tharpe fall in love with and then lose Knight is moving.

Carol Dennis plays Tharpe’s mother, who is a reverend. Her conversation about Sister Rosetta’s relationship is galvanising and beautiful, and will stay with viewers long after they leave the theater. Tharpe doesn’t fit in, and is constantly reminded of the horrors of intersectional oppression. The breadth of the musical’s commentary is emblematic of the talent of the playwright and the social consciousness of the Rep.

The fact that the cast of “Shout Sister Shout” bursts on to stage night after night and doles out such demanding lines of speech, dance, and song is immensely commendable, and demands a trip to the Seattle Rep.

Cheryl West’s new musical is a joy to experience, and tells an important story that has too long been ignored.