Asbestos Levels in The Cave Found Not to Be Harmful 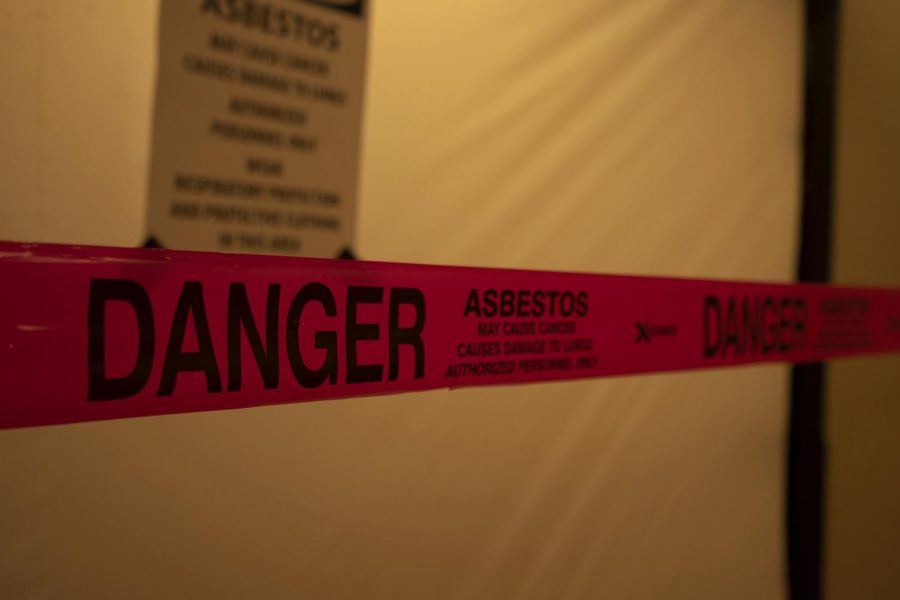 Signs posted outside The Cave warned students of asbestos found in the store.

Ice cream, tampons, frozen Beecher’s Mac and Cheese and that artery- clogging Cave Burger—these are all items that could have been found in The Cave in Campion Hall before it was closed for remodeling and temporarily relocated to the game room.

In a previous article, Chartwells claimed that The Cave would be ready to greet eager and hungry dining dollar spenders by the end of October. However, before classes resumed in July, the door to The Cave was covered and a sign was posted that read: “Danger: asbestos may cause cancer. Causes damage to lungs. Authorized personnel only.”

Asbestos is a natural mineral whose fibers can turn into a fluffy consistency, making it a great insulator in construction. However, exposure to these fibers through inhalation or ingestion is highly toxic once trapped inside one’s body.

Terry Conaty, the current Chartwells district manager, told The Spectator in a previous interview at the beginning of the academic year that The Cave did not have asbestos, despite the signage posted on the door.

“There is no asbestos. We saw a tweet that started talking about asbestos. [Asbestos] never entered the picture,” Conaty said.

At the end of October Conaty told the Spectator he was optimistically hoping for The Cave to be open. However, at the beginning of November there was an official posting on the door of The Cave that says there is indeed asbestos.

At the time that the second asbestos warning was posted on The Cave’s door the Chartwells reps were not available to comment on the current status of The Cave’s renovation for this article.

Asbestos is common in older construction because it was used as an electrical insulator for a very long time, especially prior to the 1980s. Campion Hall was built in the 1960s, and Robert Schwartz, the associate vice president of Facilities Services, assured that testing old buildings is a normal part of renovations.

In an email statement to The Spectator, Schwartz explained that Seattle U’s environmental consultant, EHS-International, conducted multiple air sampling tests on asbestos-containing materials that were discovered in The Cave’s construction area last week. The results demonstrated that the air quality was safe and that any detected asbestos fibers would have been found much lower than Washington state’s permissible exposure limit.

“No person who has spent time in or around the Cave—including employees who would have worked at the Cave last year before construction began—should have any concerns about asbestos exposure from the Cave,” Schwartz’s email stated.

Seattle U facilities assisted in the testing and removal of asbestos during renovations on any part of campus. According to Schwartz’s email, the suspicion of asbestos was related to radiator pipes, as a contractor noticed that they had old insulation materials on them.

When this was discovered, tests were conducted to control the situation and construction was put on pause. One of the first tests was to sample the air, this sample indicated there were asbestos containing material. Fortunately, the sample results came back with limits far below the exposure limit set by the WA Department of Labor and Industries Division of Occupational Safety and Health (L&I DOSH) regulations.

On Nov. 4, another air sample was taken after the asbestos material was removed, and the sample again was very below the exposure limit. The results of this test allowed construction to resume as Chartwells has been renovating The Cave.