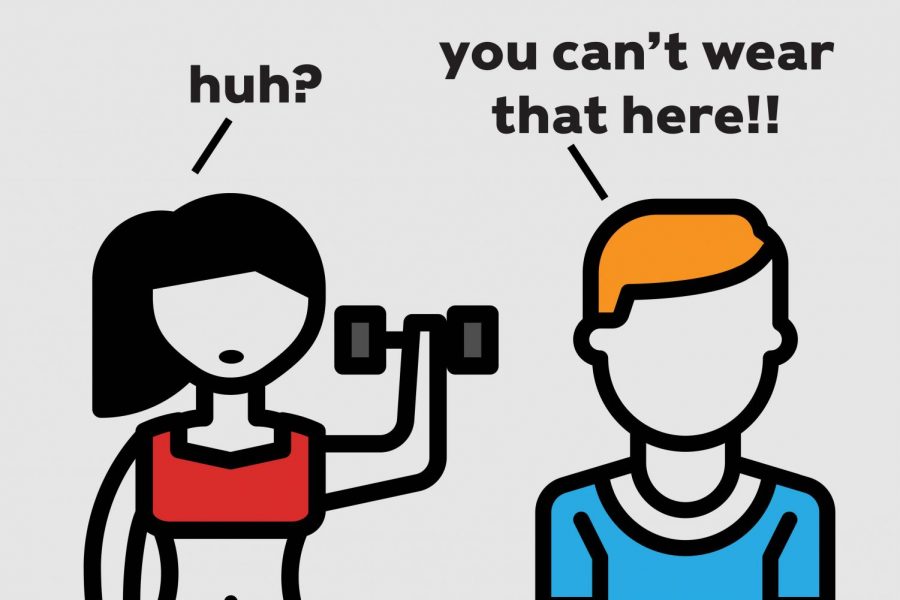 Allison Gibbons, a senior criminal justice major, is a facility manager at UREC. She’s well-versed in the policy and how staff choose to enforce it.

“Immediate procedure, when it’s identified that someone isn’t upholding dress code, would be for either a faculty staff or manager to go to that person and talk to them,” Gibbons said. “Depending on the situation, and where they are in the facility they might be pulled aside to talk or wait until they’re done with part of their workout to do it, so they don’t interrupt them.”

Kayla Sadowski, a junior nursing major, spoke about what she’s observed in terms of dress code enforcement. After three years of UREC visits, she says she feels the policy is still not equally enforced.

“Males can wear that big loop type shirt; their skin can be shown way more than women can,” Sadowski said. “If you’re going to say that the rule is being implemented at UREC because you want everyone to feel equal about stuff, then make it equal in the first place.”

In an initial interview with The Spectator, Christin Everson, the assistant director of marketing and events at UREC, commented on these frustrations with the policy.

“This is the first time I’m receiving feedback regarding the policy,” Everson said. “The policy itself is not gender-specific, it’s always been about shirts covering the entire torso—that includes any type of shirt. It’s been the policy at UREC before I took my current position and it’s standard among other campuses across the country.”

The dress code policy itself is not the only factor that is impacting students who feel uncomfortable at UREC— it’s how the UREC staff has chosen to enforce the policy.

Seattle U alumna Kaylee Dargenton alleges that when she used to go to the UREC she observed multiple instances when male UREC staff noticed a woman violating the dress code policy. Instead of telling the woman themselves, they allocated the responsibility to a female coworker.

“Anytime I had the slightest bit of midriff showing, I would, of course, have one of the girl employees come up to me because it would be perceived as sexist if one of the male employees came up to me,” Dargenton said. “They came up and told me that I needed to either leave and put on a longer shirt, hold my shirt down or they would give me a shirt to wear because of sanitary purposes they needed to not have my midriff showing.”

When The Spectator informed Everson of students’ concerns, she explained how the policy is meant to foster inclusion rather than intimidate female Seattle U community members when they are working out.

“The reason we have this policy is that we’re really focusing on inclusion. People feel like there’s certain energy they have to have when entering a fitness space—they may feel the pressure to look a certain way and wear certain things,” Everson said.

Dargenton elaborated on how she feels that UREC’s goal of not sexualizing women has turned against them because she feels different body types are not considered when employees approach students while working out.

“It seems like a cover-up for the fact they don’t want women to be sexualized for what they wear, and honestly women that have bigger breasts are targeted a lot more than women that have smaller breasts,” Dargenton said. “Two people could be wearing the exact same thing, but it’s deemed more provocative if one has bigger breasts.”

In a recent interview with The Spectator, Gibbons explained how body shaming is not UREC’s intent, but that they understand the impact of their actions.

“I think the impact of the dress code policy has definitely been brought to our [UREC staff] attention and sometimes, although we never intend to body shame anyone or make people feel embarrassed or uncomfortable in our facility,” Gibbons said. “And although that’s never our intent, I understand the impact can still be that regardless, and I definitely think we have areas to grow in our dress code policy.”

Everson concluded that UREC welcomes any feedback or negative experiences from students.

“The reason we exist is to service students. We welcome this feedback and are always trying to make the student experience better.”