The Effects of Stereotypes on the Latinx Community 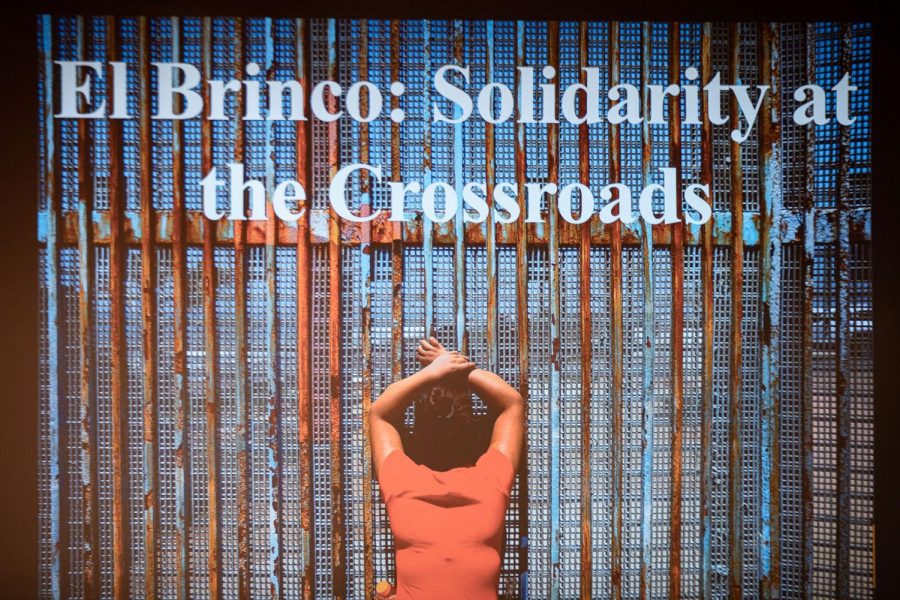 Jeannette Rodriguez presents “El Brinco: A Leap Between Worlds” for Dispatches from the Border.

With poetry, music, humor and endearment for the Latinx people and their culture, five speakers taught the Seattle University community about the current Latin American migration crisis.

Dispatches from the Border, a panel hosted by the College of Arts and Sciences and the School of Law, took place in the Pigott Auditorium on Nov. 13.

The event was organized by Gabriella Gutiérrez y Muhs and Steven Bender. Gutiérrez y Muhs is a professor of modern languages and women and gender studies, and Bender is the associate dean for planning and strategic initiatives in the Seattle U School of Law.

Muhs explained that by hosting the panel, they hope to bring awareness to the current climate at the border.

“Little is talked about in our Northwest culture, specifically addressing Latinx needs and the conditions at the border,” Gutiérrez y Muhs said. “It is important that, as our mission states, we educate ‘the whole person’ and that they are aware of the issues being addressed at the border, but also away from the border, by Latinx/Chicanx populations.”

Jeanette Rodriguez, a theology and religious studies professor at Seattle U, began her talk by displaying and honoring the names of seven children who have died at the border.

According to Rodriguez a big part of today’s migration crisis is the misplaced priority of resources. She also explained that this feeds into the false image that immigrants are dangerous.

Rodriguez went on to say that because of this prejudiced image, those already settled in the U.S. are subjected to unfair racial profiling by government officials, forced entry into their homes and violation of privacy.

“The Customs and Border Protection budget is over $14 billion, more than all the other law enforcement budgets in our country put together,” Rodriguez said.

At the event, the discussion circled around the treatment of those who are detained at the border as they are subjected to inhumane living conditions and are separated from their families. Children who have been living in detention camps are now showing signs of PTSD.

William Nericcio, a professor at the panel from San Diego State University, furthered the conversation regarding stereotypes about the Latinx community.

“We have to embrace them to the extent that embracing is a kind of inoculation against the command and control of the stereotype,” Nericcio said.

With a smile and a laugh, Nericcio also described how concerned his students sound when they ask how to defeat the stereotypes that they’ve inherited. His response was, “You can’t! They’re language, they’re tropes, they operate at the level of the unconscious, the only way to combat stereotypes is to inoculate yourself with intelligence, travel, with learning other languages and hanging out with other people.”

Bender also discussed how historically, stereotypes have been created and spread by elites. Although the impact might seem small, the way Latinx people are perceived affects how government and societal structures aid them.

“[With] stereotypes such as low intelligence, why fund public schools? Reliance on welfare and government benefits [those who are] ‘lazy, dirty and criminally inclined drunkards unwilling to assimilate.”

Rodriguez believes the best way to overcome stereotypes is by speaking the truth.

“The narrative that gets sort of publicized, is that immigrants are criminals and lazy and don’t do anything,” Rodriguez said.

Although there were a myriad of other topics spoken about besides stereotypes, almost all of the speakers had something to say about them and the effect they have on the Latinx community.

Rodriguez explained how students can help with the situation currently going on at the border.

“You are students, so your job is to learn…Get the critical thinking skills, communication skills and other skills that we provide here at the university, and then hopefully, there are other opportunities to be of service to place your skills, your gifts, your passion as students at the service of transforming society.”