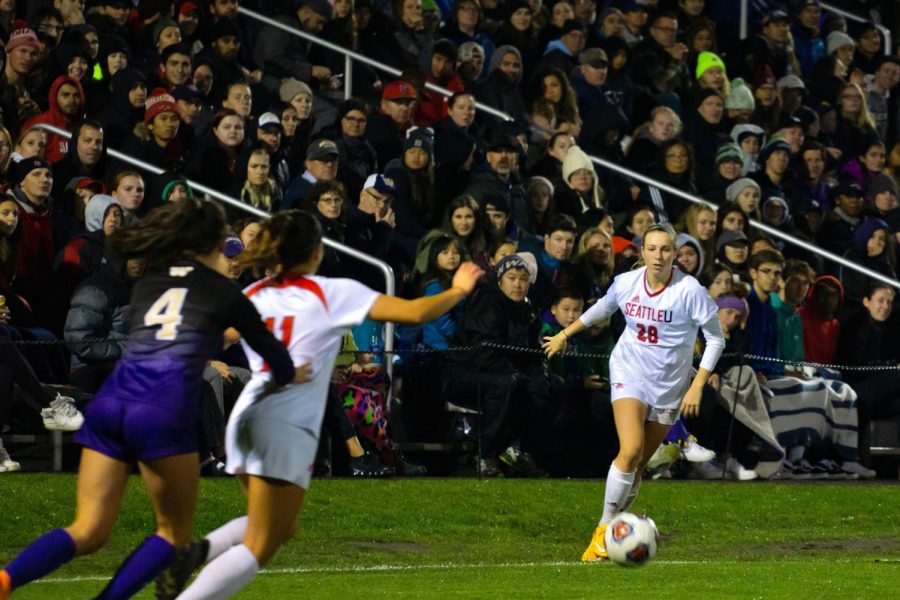 The Division I NCAA Soccer Tournament proved to be good competition for Seattle University, where the women’s soccer team tested their ambition and showcased their skills. More so, it provided the team a chance to build upon an already successful 2019 season after winning the Western Athletic (WAC) Tournament just a week prior.

In the first round of the tournament, Seattle U faced local rival University of Washington (UW). The Huskies are among a long list of contenders for the tournament trophy, so competing against UW was the Redhawks’ first challenge. Head coach Julie Woodward had confidence in her players in the midst of unfavorable early tournament predictions and rankings.

She shared that NCAA tournament games would be the same as every other game, and that the team has always thought about positive results. Although UW was a strong team, Seattle U prepared carefully for the match. Senior Jessie Ray would be the head of Seattle U’s offense, while Senior Rachel Bowler would lead a solid defense.

The game took place on Nov. 17 despite less-than-ideal weather conditions. The typical Seattle weather combined with high humidity and the pressure from the opponent prevented the Redhawks from playing their usual passing game. Though Seattle U struggled with possession, they pressed high and gave the home team some troubles in the first half.

The classic 4-4-2 formation supported the Redhawks in creating numerous counter attacks—two of them nearly becoming goals. 20 minutes into the first half, UW made three substitutions—these fresh legs brought some changes to the game.

The Huskies had more control in the midfield and they had more attacking options. The home team changed from a 4-4-2 formation diamond into 3-4-3 when they were out for the attack, and that flexibility gradually put Seattle U into a defensive standpoint. The Huskies had some chances to score after making the substitutions, but they were not able to capitalize on their chances. The first half ended scoreless for both teams.

In the second half, UW continued to take control and create scoring opportunities on Seattle U’s half. Good defense and saves from First- year Seattle U Goalkeeper Madison Waguespack helped the Redhawks maintain a scoreless match.

Ray had an opportunity to score when she faced one-on-one with UW’s goalkeeper, but the senior could not find the back of the net. Soon after the miss, the Huskies got a long shot during the 56th minute to take the lead—a lead which they kept for the remainder of the game.

Despite the unfortunate end result of 1-0 in favor of the Huskies, Seattle U gave a tough fight which made for a good match.

“We had some great shots. I think that we play really well, and I am proud of our team,” one of the fans from the Redone, Grahan Wielgos, a sophomore political science and communication and media major, said. “We won the WAC. We did a great job. We had a great season. It is really proud of our team.”

Not only did the team win the WAC Tournament, but they did so in convincing fashion.

“I am just so proud of all of them. We are doing really well and working together as a team,” Sophomore Nursing major Molly Coadn, said. “We won the WAC twice, two years in a row. We can go all the way and do it next year.”

Although they could not continue their journey in the NCAA tournament, the Redhawks ended 2019 as WAC Tournament Champions and regular-season champions— an astounding achievement for the whole team.

With the conclusion of the 2019 season, the Redhawks will lose the talents of senior players such as Rachel Bowler, Jessie Ray, Holly Rothering, Mackenzie Curry, Kate Farnham, Olivia Ovenell and Kelsey Vogel. New faces will be recruited, and Seattle U will look ahead to achieve more and build upon a successful season. It was a hard-fought and unfortunate defeat, but Seattle U showed class, potential and momentum that will carry on into the 2020 season.