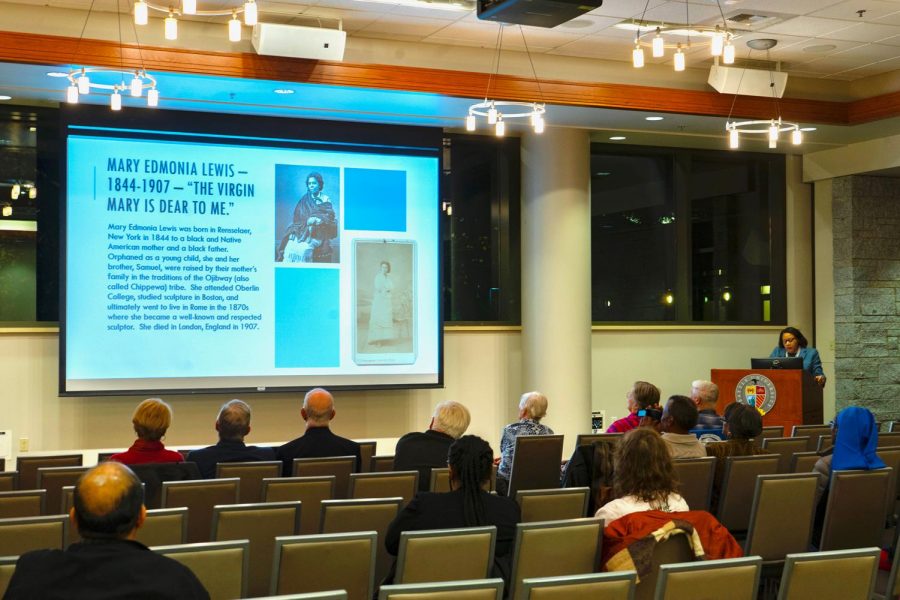 The artistic imagery of Catholicism is that of a deep sadness at the death of Jesus but also contains joy of liberation through His resurrection. For black artists, the symbology of the crucifixion has entirely different meanings. This week, Seattle University welcomed Cecilia Moore, the associate program director of Black Catholic Studies at the University of Dayton to speak at the Black Catholic Lecture.

Moore was invited to speak about black Catholic artists and how they use their faith and history as a basis of their art. Particular attention in the lecture focused on how imagery and symbolism is used in the artwork as reinterpreted in the lived experience of the black identity.

One of the artists that Moore’s talk focused on, Richmond Barthe, was a sculptor who received funding from a priest for his art education.He went on to use his faith as a cornerstone of his artwork, depicting Jesus and other biblical figures. He often challenged a white portrayal of these figures, breaking typical representations with a diverse depiction of these religious figures with Middle Eastern descent or depicting them as slaves.

“Barthe’s faith played a huge role in his mental health, after he went through several mental breaks,” Moore. “In addition to this, he was also gay, but he found a way to reconcile his sexuality and his faith. His focus on the beauty of the human body was the primary way that he accomplished that synthesis.”

Moore continued with another Black artist, Edmonia Lewis, a female sculptor who used her Catholic identity, as well as her indigenous and black heritage in her pieces. She is most notably a neoclassical sculptor in a time when that style was not as popularized. Notable works from her included the ‘Marriage of Hiawatha’ and statues of the Virgin Mary.

Clemantine Hunter was another black Catholic painter who used found objects as her canvas. Many of the scenes that she made were of Catholic ceremonies and often included biblical characters represented as black. A large theme of her work was of a black Jesus on the cross.

Lastly, Mary Lou Williams was a composer and musician during the Civil Rights Movement. She used her work to help get money to support impoverished people in her community. When she composed, she said it was like God was flowing into her fingers.

Jaisy Joseph, a theology professor, spoke to how the imagery of Catholicism is used in this context and the power that it holds.

Through the course of the talk, Moore spoke to the struggles that these artists faced because of their race, and how they found solace and inspiration in their faith. Moore is working on a book about these black Catholics, in all walks of life, and the impacts that they have on civil rights, arts and politics.

“[Black artists] have created an enduring legacy for all ages, they are our master teachers,” Moore said. “They have taught us through their art the beauty that radiates in us, and that in loving ourselves, we love everyone.”

For many audience members, this lecture provided an opportunity to speak power to important stories that are often not afforded a wide platform.

“Just to learn the historical moments and events for black history, black expression, and black Catholics, it means so much to me that [Moore] is working on telling these stories. Learning about these people gives us identity and hope in a majority white church in America,” said audience member and black community member, Cynthia Brown said.

The discussed artwork ties into the theological idea of African-American liberation theology, and the argument that Jesus is black. The story of Jesus creates solidarity with those that face persecution and unjust murder, he himself sentenced to a public death, fueled by mob mentality. The basic idea of this argument is that because Jesus came down and was crucified, he is in solidarity with oppressed people such as the black community, with a specific connection to lynching of black people in America and later hate crimes.

The power of religious symbols, such as the crucifixion, are something that artists have taken to before the formal theories of theologians.

“[Black] artists were picking up on the connection of the lynching tree and the cross long before theologians, Joseph said. “So I think that what art is able to do is really capture the humanity of black people, it really vividly shows that in liberation theology, God’s on the side of the marginalized.”