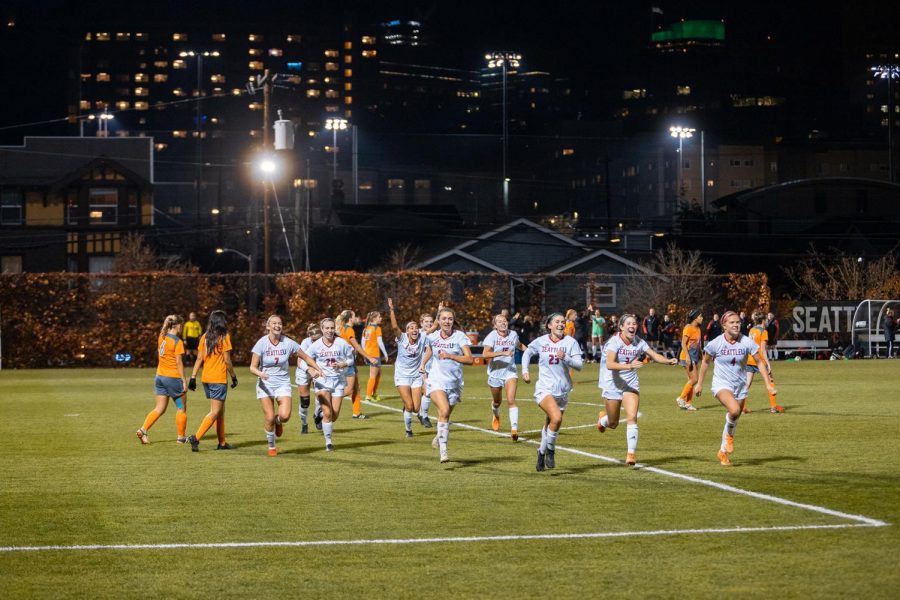 For the second straight season and fifth time in program history, the Seattle University Women’s Soccer team are the Western Athletic Conference (WAC) Tournament champions and are once again going to the NCAA tournament.

This weekend, Seattle U hosted the 2019 WAC women’s soccer tournament at Championship Field. Last year, Seattle U took home the WAC trophy and earned a spot in the NCAA tournament, where they fell short in the first round against Stanford.

The Redhawks had another great 2019 season, finishing 11-7-2 overall and 6-1-1 in their conference games. They won the WAC regular season title in the final game of the regular season, which secured them the number one seed and a first round bye in this year’s conference tournament.

A big reason for the team’s success this year has been the solid defensive core headlined by WAC Defender of the Year Senior Rachel Bowler. This is coupled with a strong offense led by the steller duo of WAC Offensive Player of the year Senior Jessie Ray and Junior Leahi Manthei.

Seattle U Head Coach Julie Woodward, the WAC Coach of the year, gave her thoughts as to why the team has been so successful over the years.

“We have been fortunate to have some great players that choose to attend Seattle University and play for the program,” she said. “Year after year, the turnover in the senior class and the overall upperclassmen leadership provides such great character and helps instill the important parts of our culture.”

In the quarterfinals of the WAC tournament, University of Texas Rio Grande Valley (UTRGV) and University of Missouri Kansas City beat their WAC opponents to set up semifinal matches against Seattle U and Utah Valley University (UVU), respectively.

The Redhawks dominated their semifinal game against UTRGV in terms of shots on goal; however, the visitor’s strong defense kept the game scoreless. In the 76th minute, the Redhawks finally broke through when Sophomore Forward Lauren Brown— in her first game back from injury— was in the right place at the right time to knock the ball into the goal. The Redhawk defense held the lead the rest of the way, sending the team to their seventh straight conference championship game against a very talented UVU squad.

After the victory, Woodward explained the team’s postseason goals. “Winning the WAC and making the NCAA tournament was definitely one of our goals. [The team] took care of business by winning the regular season and securing the number one seed,” Woodward said. “Regarding success in the NCAA tournament, we have tried to instill a mentality that we treat every game like an NCAA tournament game.”

In the championship game against UVU, the Redhawks managed to come from behind to dramatically win the conference tournament via a golden goal in overtime. Seattle U started off slow in the first half as they gave up a goal and were seemingly outplayed. However, as the match wore on into the second half, the Redhawks started playing better, showing why they were the regular season champs.

Halfway through the second half, Seattle U thought they had scored the tying goal; however, the referee blew it off due to a foul. Nevertheless, the Redhawks kept pressing and eventually attained the tying goal with three minutes left in the game when Manthei hammered home a shot following a scramble in front of the goal.

Then, late in the first period of overtime, Ray—the tournament MVP—got a nice pass from a teammate and fired the championship winning strike into the back of the net. Her goal was the first golden goal in the WAC conference championship game since 2008. The dramatic moment resulted in a massive celebration for Seattle U players and fans, and anguish for Utah Valley.

After the celebration, Ray described her emotions following the goal and hope for the future of the team.

“I felt pure joy just to get to celebrate with my teammates, help solidify the win and get to keep playing with them. We want to win some games in the NCAA tournament and try to make a nice run.”

Seattle U will face the University of Washington Huskies locally on Saturday, Nov. 16 for the first round of the NCAA tournament. The game will kick off at 6:00 p.m. and will take place at the Husky Soccer Stadium.

This editor may be reached at [email protected]