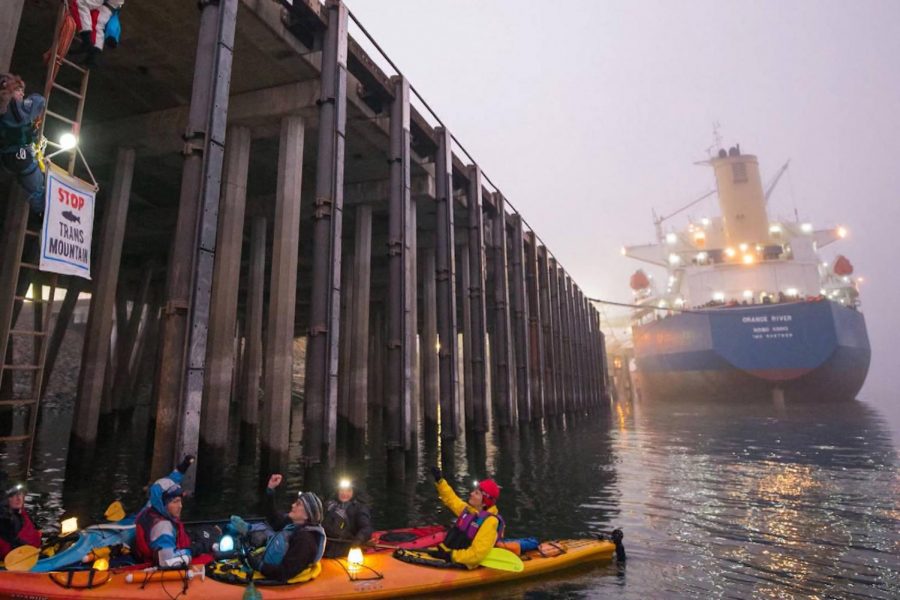 Trans Mountain Expansion Pipeline Protests in Washington
In Vancouver, Washington, protestors chained themselves to a dock where a shipment of a pipeline for the Trans Mountain Pipeline Expansion project was to be delivered. Along with those who chained themselves to the area, many people took their activism to the waters where they floated on kayaks. The Trans Mountain Pipeline, which is 710 miles long, is a crude oil pipeline running from Alberta, Canada to the coast of British Columbia. The pipeline has reported 82 spills since 1961. The project is set to be expanded to triple the capacity of the pipeline. This protest comes days after 383,040 gallons of oil leaked from the Keystone Pipeline in North Dakota.
UW College Republicans Club Asked To Revoke Connection With National Group
The University of Washington’s College Republicans (UWCR) club was recently asked by The College Republican National Committee (CRNC) to revoke their connection with the national group. In 2018, the CRNC did not recognize a charter at UW, but UW students continued to meet and operate, even using the brand of College Republican. The CRNC stated that the UW chapter violated a policy that “campuses be free from hurtful or inappropriate speech and be a forum for safe, lively, and diverse opinions being expressed from every corner of America.” In 2019, the former chapter hosted an “affirmative action bake sale,” which is based on the selling price of goods on a persons’ gender or race. CRNC warned the UW club to cancel the event, as it reflected poorly on College Republican organizations. The UW group has rebranded itself under a new name, the Husky College Republicans.
Apple Puts $2.5 Billion to Housing Crisis in Bay Area
As the housing crisis worsens in many major cities, Apple vowed to put $2.5 billion towards an affordable housing and availability campaign. Apple joins Microsoft, Google and Facebook in allocating money to this issue, which now makes a total of $5 billion in donations from tech giants. $1 billion will be used for California to build new low-to-moderate-income housing on an “open line of credit,” while another billion will be for first-time house owners, creating a mortgage assistance funding. $300 million is allocated for land to build affordable housing, but the land will be owned by Apple. $150 million will be invested into a non-profit in the Bay Area which supports affordable housing and loan forgiveness. Another $50 million will be directed to help support the homeless population. The project commitment will take about two years; Apple is searching for private developers looking to work on these projects and start immediately.
Updates on Trump’s Impeachment Inquiry
As President Donald Trump is in the middle of an impeachment inquiry, the U.S. Energy Secretary Rick Perry has resigned. Perry was subpoenaed in the ongoing impeachment inquiry regarding is Trump’s phone call with Volodymyr Zelensky, the President of Ukraine. Trump asked Zelensky to investigate former Vice-President and 2020 presidential candidate Joe Biden and his son Hunter Biden’s business ties in the Ukraine. Trump allegedly withheld aid to the country. Originally, Gordon Sondland, the U.S. ambassador to the European Union, stated there was no quid pro quo, and the delay of aid was related to an anti- corruption statement, but Sondland then said he remembered telling Ukranian officials that aid would stop unless the Bidens’ were looked into. On Nov. 4, it was ruled that Trump does not have immunity to a grand jury’s subpoena for his tax returns. Trump’s lawyer said they will appeal this most recent decision. If the case is appealed, it will likely move to The Supreme Court. In a separate case, Trump is being sued by columnist E. Jean Carroll who accused him of rape. Trump called the allegations “totally false.”
Trump Pulls US Out of Paris Climate Accord
President Donald Trump decided in 2017 to pull America out of the accords due to an unfair “economic burden” for Americans, but due to regulations of the United Nations, withdrawal process could not begin until Nov. 4. This means that it will not take effect until 2020, or one day after Election Day. Based on satellite data, October proved to be the warmest month on record. A study endorsed by 11,000 scientists across the world and based on 40 years of data was released on Nov. 5. The research highlights information that has not been addressed by governments and draws attention to how dangerous climate change is. The Paris accord aims to ensure 188 countries keep the global temperature below 2 degrees Celsius above pre-industrial levels.
Protests in Chile Following Living Cost Increases
After a 3% rise in subway fares, Chilean citizens have been protesting for over 12 days. The rise in fare is paired with rises in housing, privatization and inequality that surge through the country. At least 18 people have died in protests of over one million Chileans in the streets, and over 7,000 people have been arrested on arson and violence. Chilean President Sebastián Piñera has responded to the uproar with a small raise of minimum wage and increased tax on the wealthy. Chile was set to host two upcoming international summits: the Asia-Pacific Trade Facilitation Forum and a United Nations Climate Change Conference. At the Asia-Pacific Trade Facilitation Forum, President Donald Trump and China’s Xi Jinping planned on signing a deal to ease the trade war between China and the U.S.