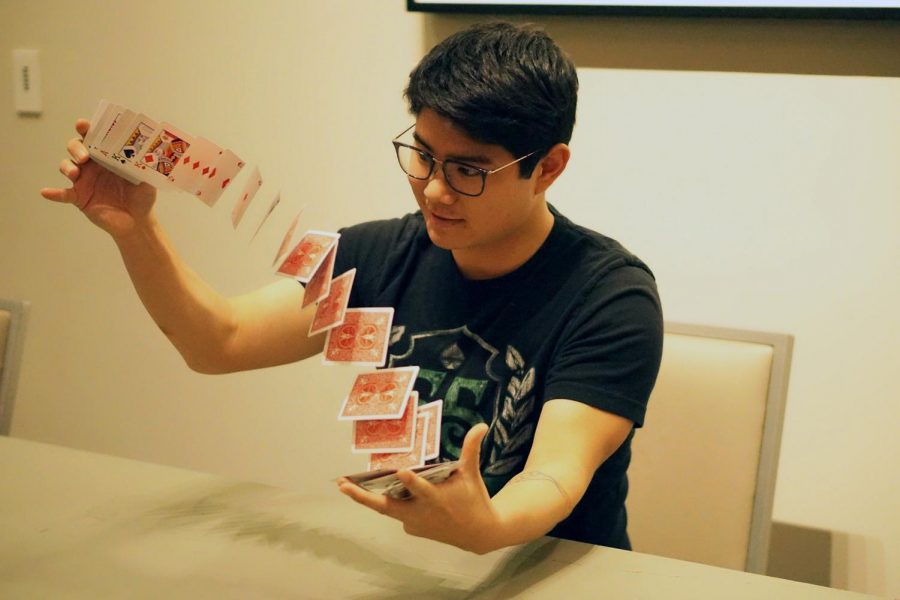 Every student needs a little magic in their life, and graduate student Travis Kim is here to deliver. Kim studies student development administration in the Education Program, but he has other professional passions beyond his major. Kim is a professional magician and member of the exclusive magic nightclub, the Magic Castle in Los Angeles.

LG: How did you first get into magic?

TK: In November of 2013 I was at UC Santa Barbara and I was skating down this hill right next to the Lagoon on campus and I was with my friends. I had the bright idea of thinking, “Hey guys, why don’t we try going over the speed bumps?” I lost my balance and I fell and hit my head on the curb and ended up with a skull fracture and mild traumatic brain injury, so that put me out of school for a while. I was back home in San Jose recovering, and I watched a movie called “Now You See Me,” and they did this one card trick in the movie and I thought it was the coolest thing ever. So me having all the time in the world, I went on to learn how to do the trick…and I kind of got hooked ever since.

LG: What was it like for you to first visit the Magic Castle?

TK: I went to the Magic Castle with a friend who was a magician member and I fell in love with the place. I actually met one of the people that I learned magic via the internet, and I was able to walk up to him and say “Oh my God, it’s you,” and he was super nice. I just instantly fell in love with that community.

LG: What was the audition process like for the Magic Castle?

TK: I had never considered auditioning myself until I met someone else who I was swimming with at the time…and he saw my work and he said [I] should consider auditioning because he was actually a magician member too. At first I thought, “No , I can’t, I’m way out of my league here,” but he reassured me that he thought I had a good chance of passing the audition. They send you back to this waiting area. Finally, after what felt like hours of waiting, they called us all back and they shook my hand and said “Hey, congratulations. You’re the only one from tonight that we’re recommending for a magician membership.” I teared up a little bit. It was an emotional moment and as soon as I became a magician member I set off immediately almost on a new goal: to become a headline performer.

LG: What’s it like being a student here in Seattle with the Magic Castle so far away?

TK: I guess sometimes it’s a bummer that I can’t go back quite so excessively but at the same time, you know, I have opportunities to practice magic here…sometimes I’ll perform for different on-campus organizations and that’s really nice because then I get to interact with the students as well, which is a part of my major. So framed in that way, it’s not so much as a bummer to be that far away from the Magic Castle.

LG: What does being a member of the Magic Castle mean to you?

TK: I think it helped support my magic learning and practice, meeting just a bunch of other new professional magicians that I had read about and really looked up to is just so wonderful. Being able to interact with my peers and just learning from their work and sharing experiences has really been meaningful.

LG: How can you take your skills in magic to your major as a student development administration student?

TK: Being a magician and being able to study as a higher education professional…is about helping students see that magic in their life. It is also, to me, about helping them see that each of them are capable of their own magic [and] sharing that with the world in whatever capacity they can and getting students to that place where they feel they can do that.

LG: How has magic impacted you personally?

TK: I guess I never thought a deck of playing cards would mean so much, and that I would be able to speak [on magic] so much. What started off as just card tricks has turned into almost a [new] worldview of my relationships and moments [in my life].

You can see some of Kim’s magic at university events entertaining students and on his Instagram page @tkards.