Femininity at The Frye, Curated by Seattle U Professor 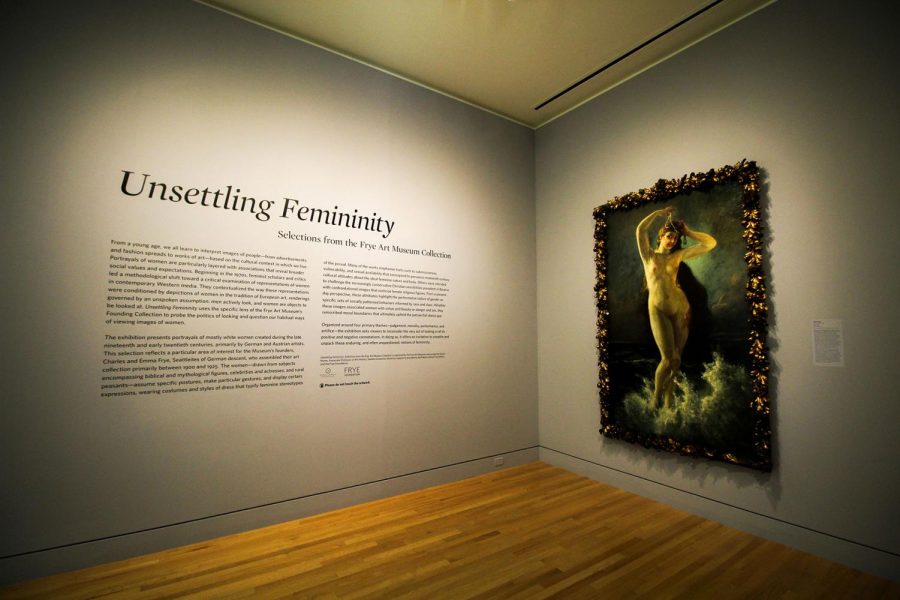 The gallery exhibit was curated by Naomi Hume, an associate professor of art history at Seattle University. This exhibit is fitting for Hume, due to her focus in gender expression through European art. Hume’s curation of the exhibit examines the role of gender politics in art, and also the various impacts that female sexuality has on the viewers.

Hume proposed this exhibition because she was “really interested in the representations of women in the [Frye] collection,” and inspired by “the experience of taking students to the Frye…and combining that with some of the ways that my students have responded to images in the collection.”

The works displayed are paintings from mostly male artists of Austrian and German descent from the late nineteenth and early twentieth century. Hume’s curation of the exhibit is not heralding the artists’ depictions of women and girls, but in fact, challenging the inherent biases of the museum public.

The exhibit has four main themes: judgment, morality, performance and artifice, divided into four separate rooms of the gallery space.

In the case of how femininity is expressed, the exhibition argues that we should have questions.

Hume said that even though we think of our modern society as having a different relationship our view of women, it is still shocking to see how little has changed in a century and a half.

“When women are represented in ways that don’t obviously make them look beautiful or…appealing or attractive…we want to know why would you represent her that way,” Hume said. “These limits are still in place that we don’t place in the way that we picture men.”

Altogether the themes craft a cohesive representation of society’s expectations for women and their roles versus those of men. It also builds off of turn-of-the-century Germany’s view of women in art versus today’s view of women.

“There’s a huge difference between how 19th century European cultures understood gender and how we tend to understand it now,” Hume said. “We tend to think of [gender] as hyper- masculinity at one pole and hyper-femininity at the other but there’s a whole continuum in between, which is unlike the way the 19th century understood gender, which was a real polarity of male versus female. Male was cultured and rational, kind of abstract, and female was emotional, instinctual and…close to nature.”

The exhibition’s female subjects are depicted in reference to mythological and biblical symbology, utilized by artists to depict the female nude without criticism. For example, by depicting Roman goddess Venus emerging, naked and with flowing hair, from the sea in a traditional depiction of her birth, a classical story is used to depict a naked woman, sexualized for male consumption, without questioning the need for her nudity. The nude is justified through long-standing classical connotations, and so it is easily-consummable for the majority male audience.

The Frye Art Museum is a short walk from campus, and admission is free.

“It’s a pretty amazing thing to have a free museum within walking distance of our campus that has a really interesting and pretty unusual permanent collection” Hume said, “and introduces us to all kinds of contemporary art [with] often Seattle based artists.”

Going to see “Unsettling Femininity” and the other exhibitions currently on display is a wondrous solitary time of reflection or a rousing group activity for the weekend.