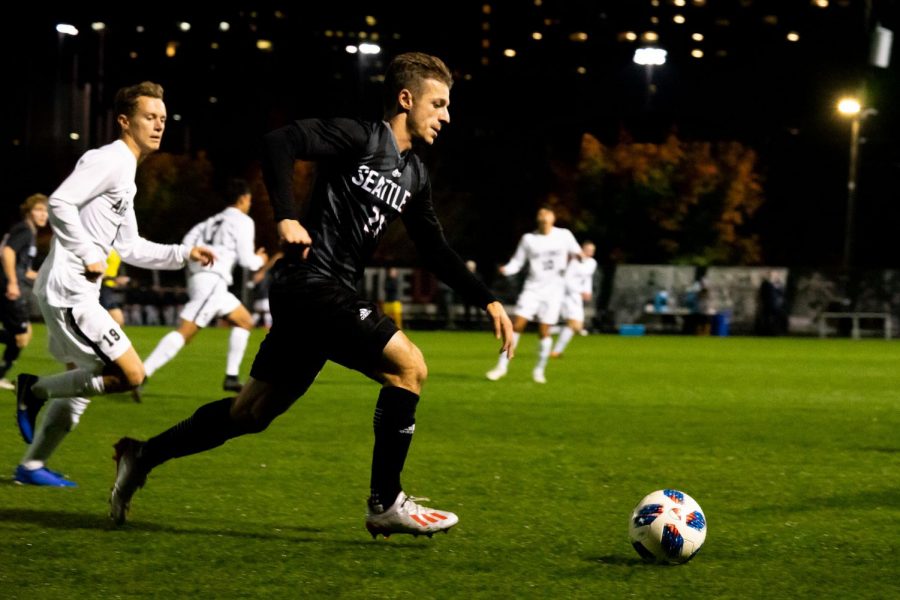 Men’s
Golf
The Seattle University Men’s Golf team finished their fall season after competing at the Visit Stockton Pacific Invitational. The tournament was held from Oct. 21-23 at Spanos Park in Stockton, California. Sophomore Nathan Cogswell continued his impressive season after achieving a four-under 212— earning him a seventh-place finish.

As a team, Seattle U placed 11th out of 16 universities in attendance. The Redhawks will start their 2020 season on Feb. 10-11 with the Pizza Hut Pat Hicks Invitational, hosted by Southern Utah University.
Basketball
Seattle U’s Basketball team kicked off their early season exhibition with a 92-71 victory against Saint Martin’s University (SMU). Junior Terrell Brown started his 2019 season off by scoring 23 points—including 13 in the second half and seven assists. Besides Brown’s performance, Senior Myles Carter and Sophomore Riley Grigsby assisted 15 points for the Redhawks.

The team will continue the beginning stages of their season when they play the Pacific Lutheran Lutes on Nov. 5 at the Redhawk Center.
Soccer
The Seattle U Men’s Soccer team finished strong in a tight match, winning 2-1 against Air Force Academy. The Redhawks played at home, showcasing strong defensive skills in preparation for the upcoming Western Athletic Conference (WAC) tournament.

Redshirt Junior Noe Meza opened the score for the Redhawks with a lofted ball in the first half. During the first 15 minutes of the second half, Sophomore Hal Uderitz scored the second goal for the Redhawks, helping them successfully defend their winning streak of nine. Aside from Meza and Uderitz, forward Sophomores James Morris and Declan McGlynn also had notable performances.

The team will continue their season this week at home, hosting Utah Valley University on Nov. 3 at Championship Field.
Tennis
The Seattle University Tennis team wrapped up their fall season at the Intercollegiate Tennis Association (ITA) Northwest Regional Championships, which was held at Stanford University and lasted from Oct. 24-29.

On the first day of the tournament, Seniors Alex Chan and Adrian Alvarez-Sanabria teamed up for a victory of 8-3. Unfortunately, Juniors Emilio Monroy and Colton Weeldreyer lost a close match 6-8.

In the singles games, Chan had another notable performance for the Redhawks, just falling short with scores of 4-6 and 3-6. Following Chan, Monroy gave his opponent some challenges with scores of 2-6 and 2-6.
Women’s
Tennis
This past weekend, the Seattle University Women’s Tennis squad finished their 2019 season, competing at the Intercollegiate Federation Northwest Regional Championships at Stanford University.

The Redhawk team effort was led by First-year Jade Lancaster, who became the first ever Seattle U player to reach the round of 32 at the tournament. Senior Peggy Rooke also won her first-round match, while Juniors Hannah Gianan and Kyra Jung and Sophomores Alisa Sabotic and Jillian Rasmussen all played solidly despite late losses.
Rowing
Seattle U’s Women’s Rowing team opened their season on Saturday locally at the Puget Sound Autumn Invite. They raced six boats, finishing runner-up in one race and third in two others. The varsity four A boat finished second in its race, while the two novice eight boats took third in their respective races.

The team will race locally again next weekend at the Head of the Lake regatta, hosted by the University of Washington.
Volleyball
On Oct. 24, the Seattle U Volleyball team attempted to bounce back from previous losses as they took on University Texas Rio Grande Valley (UTRGV). Unfortunately, the team’s struggles in Western Athletic Conference (WAC) play continued as the Redhawks fell in three straight sets.

Sophomore Sofia Sanchez led the offensive attack with eight kills, followed by First-year Amaris Carter and Sophomore Eve Kerschenbaun with five each. Junior Libero Tijana Milojevic finished the match with 21 digs, becoming the new leader for most digs in the program’s history.

In their second game, the Redhawks were again swept in three sets by WAC leaders New Mexico State University (NMSU). Sanchez and Milojevic had continued success, leading the team in attacks and digs respectfully.

The Redhawks will return home on Oct. 31, where they will fare against Grand Canyon University.
Soccer
The Seattle U Women’s Soccer team played a competitive match on Oct. 24 at Cal Baptist University with first place in the conference standings up for grabs.

The Redhawks came up short, losing four to two and ending their three-game winning streak. Despite the loss, Senior Forward Jessie Ray scored twice in less than a minute. Ultimately, the Redhawk defense was unable to contain the Lancers as they let the 2-2 tie slip away late in the match.

On Saturday, the team bounced back with a 2-1 victory against UTRGV, earning a first-round bye in the Western Athletic Conference (WAC) tournament. Ray and Junior Forward Leahi Manthei each scored goals in the first half.

In the second half, as the visitors began applying more pressure, the Redhawks gave up a goal but defense managed to buckle down and keep UTRGV from tying the game.

The regular season will continue at home for the Redhawks next week as they fare against Utah Valley University at Championship Field. The game is scheduled to begin at 7:00 p.m.