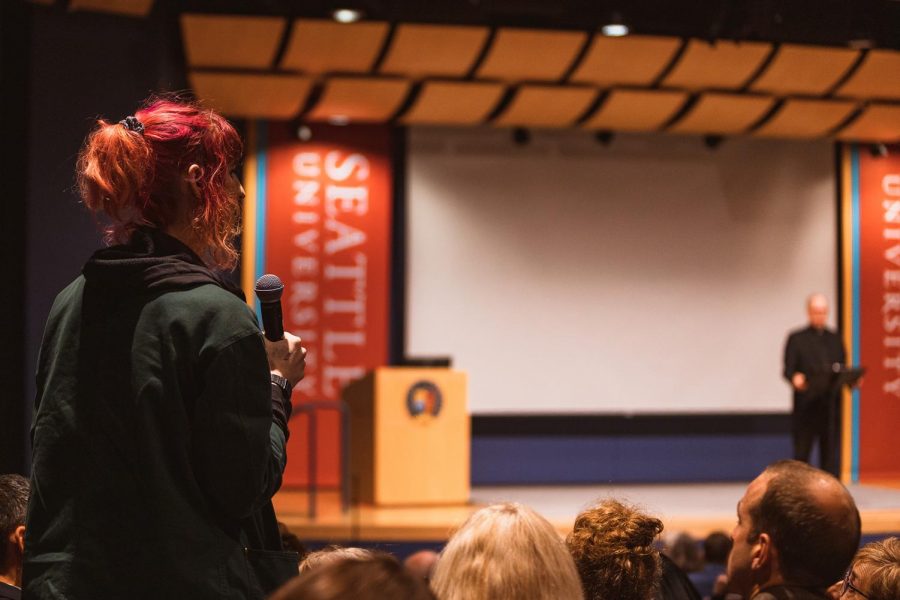 The President’s Forum is a quarterly opportunity for the Seattle University community to hear directly from its president about the campus’ most pressing matters. At President Fr. Stephen V. Sundborg, S.J.’s first forum of the year, he spoke to a recent decrease in undergraduate enrollment and funding, a possible change from the quarter to semester academic system and the ongoing campus conversation regarding his recent decision to remove a Planned Parenthood listing from a university website.

After highlighting the university’s recent Uncommon Good campaign announcement—a fundraising effort to allocate money for new programs and organizations—Sundborg said that enrollment has steadily been decreasing in recent years and falls short of budgeted projections.

He reported that first year undergraduate enrollment was 121 students short of the projected amount, and that transfer student and graduate student enrollment were also under the budgeted numbers. The continuing undergraduate and law school enrollment numbers, however, are higher than was budgeted—with a positive gain of 30 students and 36 students, respectively.

Sundborg said that this deficit in enrollment is a nationwide issue that colleges and universities are struggling with. To remedy the problem at Seattle U, Sundborg said that programs and degrees need to be evaluated so that they match what prospective students need or are interested in studying.

“We have to do an overall review of our curriculum, reimagine and revise our curriculum so that it responds to what students today are needing to do,” he said in a follow-up interview with The Spectator. “So it probably means that we have a significant number of programs at Seattle University that may be under-enrolled, and there might be other ones that are growing and so we need to we need to do an examination of that.”

This year, to balance the budget, the university decided against a campus- wide reduction in budget. They instead used their built-in contingency of $1.7 million, used funds gained from summer school courses and cut back on a planned maintenance and a planned ‘computer refresh.’

While he assured the audience that the university’s financial situation has not reached a crisis point, Sundborg encouraged the audience to do their part going forward to make Seattle U a distinctive university and destination for prospective undergraduates.

“Every staff person, every faculty person, every person in Residence Life, we just need to make sure that our students really know that they belong in our university,” Sundborg said. “That can make a big difference because I think enrollment is impacted a lot by word of mouth about students.”

Sundborg additionally thanked the Strategic Planning Steering Committee for their work in developing their strategic plan for the year, which outlines academic and cultural goals for the university going forward. In their plan, the committee recommends that the university consider a change to a semester system with two fifteen week terms in an academic year.

Seattle U is currently in the minority of universities across the country, as it operates with a quarter system, which has 10 week terms. In a later interview with The Spectator, Sundborg said that the decision on whether to change to semester will be made by the end of the academic year, and that if approved, this change would come in 2024 or 2025.

Before opening up the space for audience questions, Sundborg addressed his decision to remove Planned Parenthood as a recommended resource on the College of Arts and Sciences website.

Sundborg reiterated that this decision was a necessary one for the university, as it is Catholic and Jesuit, but said that he made a mistake in directly responding to the outside organization which requested the removal of the listing. He also spoke of the protest on Oct. 18 against this decision, in which he said he held 11 meetings with groups of four to six students.

Sundborg said that he heard from some students that they felt his decision signaled the university was not a place that they belonged. “So that was a concern,” he said. “It’s something that trips off a question about, well, how much do we belong? And what kind of security and safety can we have at the university?”

Sundborg said that it’s rare he is able to hear directly from students about their experiences and concerns, and thus he appreciates the opportunity he had in the listening sessions. He said that he would be interested in finding some way to hear from students more often; some university presidents have open office hours for students to come in, something Sundborg said he could consider.

“It’s amazing to me to be able to get first-hand the experience of students in regards to some of the hardships or some of the suffering that they experience, particularly in regard to their gender expression and the healthcare that they receive.”

When Sundborg later opened the forum up for audience questions, fourth-year student Hatcher Chapman had a question for Sundborg. “I was just wondering if the administration is seeing the frustration students expressed in the light of the Planned Parenthood decision as connected to the larger conversation about enrollment numbers?” they asked.

In response, Sundborg said that in his listening sessions at the protest a couple of weeks ago, he heard from some students that their experiences on campus did not match what they had expected coming into their time at the university. While he expressed that this disconnect was something he wanted to fix, Sundborg said he did not believe it was impacting current enrollment numbers and that if it did have an impact, it would be on student retention.

“We have to have absolute consonance or harmony between how we present ourselves and who we are or at least who we try to be and that could be one of the instances,” Sundborg said. “I don’t think it would show up though yet…But it’s the kind of thing we look at, we’d have to look at is the experience of the students what they were promised and that’s a big consideration and one that I heard.”

Another staff member in the audience involved with student recruitment shared a similar concern to Hatcher, and said that they had heard from graduate directors that students were aware of his Planned
Parenthood decision. “They expressed concern,” they said. “I wouldn’t go as far as to say they have determined that they’re not coming to the university, but it’s clearly shading their opinion of the university whether or not this in fact is the right place.”

Sundborg said that he had heard similar concerns, and that the decision now brought Seattle U to the middle of “culture wars in Seattle, and in the United States” regarding Planned Parenthood and abortion.

He additionally said that he knew of donors who were pulling their donations in response to his decision, but that it would not change his decision.

In reference to a video about the Uncommon Good campaign that Sundborg had shown earlier in the forum, an audience member pointed out that this video did not have captions for people who are deaf or hard of hearing.

They also said that they’ve had several other serious issues with accessibility on campus, including bathroom doors which violate American Disability Act regulations. Sundborg thanked them for bringing the issues to his attention and committed to the formation of one such committee.

The last audience member to speak was a staff member who took issue
with Sundborg’s decision, especially in light of his earlier comments in the forum in which he referred to Seattle U as “the most inclusive and progressive Jesuit university in the world.”

They said that the issue at the heart of campus outrage seems to be that there is a tension between Sundborg’s duties as a leader for the students and for the university as a Catholic institution, and they challenged Sundborg to consider his role as the President of a “progressive Jesuit university.”

“It seems like being a Catholic institution is taking more of a priority than the responsibility of the university,” they said. “Do you think it’s more important to uphold your responsibility to your students or to the Catholic Church?”

Sundborg said that the issue was not the Catholic Church taking priority
over the needs of the students; instead, he said it is about the university’s need to maintain its identity as a catholic institution.