Steve Lacy Is an Undeniable Rising Star with Range and Rhythm 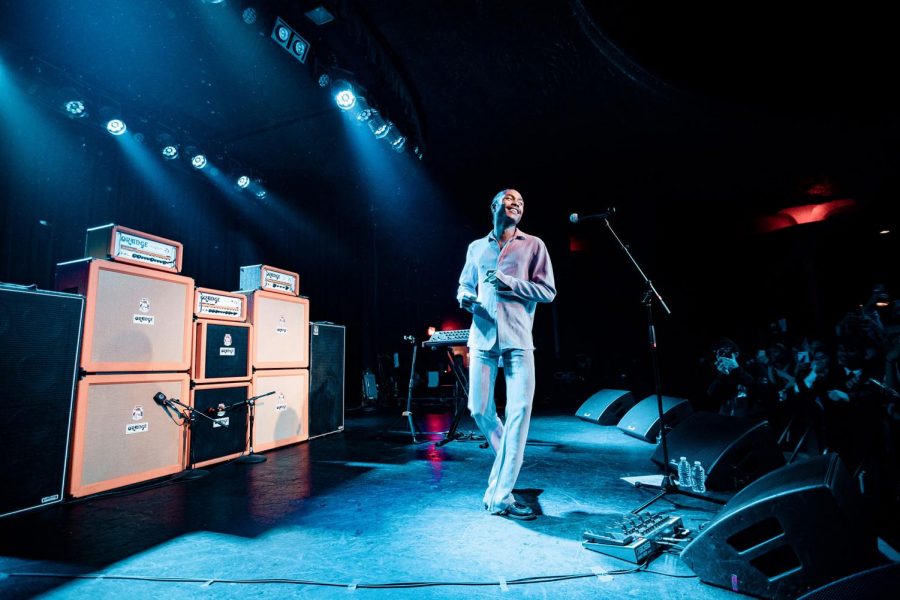 Showbox at the Market saw a tour stop from Steve Lacy during his Apollo Tour on Monday, October 21st, 2019.

The music industry is experiencing a new wave. Steve Lacy, a 21-year-old virtuoso, is the undefinable, genre-bending star at the forefront of this new musical movement. In a stop on his “Apollo XXI” tour, Lacy performed before a crowded audience at Seattle’s Showbox.

The sense of anticipation was palpable as the audience filed into the venue and the Showbox’s red lighting cast a warm glow across the expectant faces turned towards the stage. Soft R&B played in the background and an excited buzz filled the vast room.

The room fell silent as the show opened with a DJ set from Arkansas-based rapper Kari Faux, also known as Violet Waters. Faux, known for her outlandish style, wore an oversized purple sweatshirt, an oversized fisherman’s vest, colorful leggings and a pair of Elton John-esque sparkling sunglasses. She expertly transitioned between songs and soon she had the audience dancing and singing along.

After Faux’s set and a brief intermission, Lacy leapt onto the stage to the sound of wild applause. Wearing the slick, millennial-pink suit seen on his “Apollo XXI” album cover, Lacy’s face glowed as he looked out across the audience.

Initially known for his involvement with the R&B band The Internet, Lacy gained solo notoriety in 2017 with his EP “Steve Lacy’s Demo.” In early 2019, Lacy was featured in Vampire Weekend’s song “Sunflower,” and he released his debut album “Apollo XXI.”

Joined on stage by DJ Alima Lee and a wall of orange trimmed amplifiers, Lacy began his set with the dreamy album opener “Only If.” Lacy’s smooth voice glided over subtle electric drums and a sitar-style guitar riff while he swayed rhythmically to the music.

After “Only If,” Lacy dedicated his song “Like Me” to any and all queer people in the audience. In “Like Me,” Lacy, who identifies as bisexual, speaks to the uncertainty of coming out. The crowd erupted in applause and the positive energy in the room swelled.

Lacy’s unique sound evades genre categorization. One minute he’s pulling inspiration from Motown and the next minute he sounds like a late 70s punk rocker. His music is at times reminiscent of Prince, yet it manages to remain original and true to hisown sound.

Throughout the performance, Lacy displayed his extensive vocal range. One moment singing in a warm tenor, the next in a clear falsetto, Lacy transitions easily throughout his vocal range. Besides his vocal abilities, Lacy also boasts a wide array of instrumental talents. During the concert, Lacy switched between guitar, electric bass and synthesizer.

Early on during the concert, Lacy made a point of saying he wanted his set to be a phone-free environment. He made it clear that his concert should be an intimate experience between himself and the audience—not to be interfered with by the presence of phones. The general admission area, once a sea of phone screens, suddenly became a sea of bobbing heads.

The show had an aura of familiarity as Lacy spoke candidly with the audience about his emotions, his experiences and his world. He remarked on Pharrell Williams’ recent GQ magazine cover, which features Williams shedding a tear. Lacy then made a joke about toxic masculinity before launching into another song.

Halfway through the show, Lacy exited the stage to the soothing melody of “Amandla’s Interlude.” As the song faded out, Lacy returned to the stage—this time wearing striped joggers and a tight green tank-top. He took a moment to show off his new look to the audience before continuing with the set.

Lacy’s interaction with the audience has a conversational feel to it. During his set, he gave a fan the opportunity to sing along with him, and eventually complimented the fan’s skills. Lacy also showed off his crisp braids, telling the audience that his sister had done them. The show felt like a Lacy was connecting with the audience rather than just performing.

As the set came to a close, Lacy asked that the audience would all smile. Steve Lacy’s concert doesn’t feel like any other concert. He wanted his audience to feel a sense of camaraderie with him and each other, and he truly was successful.