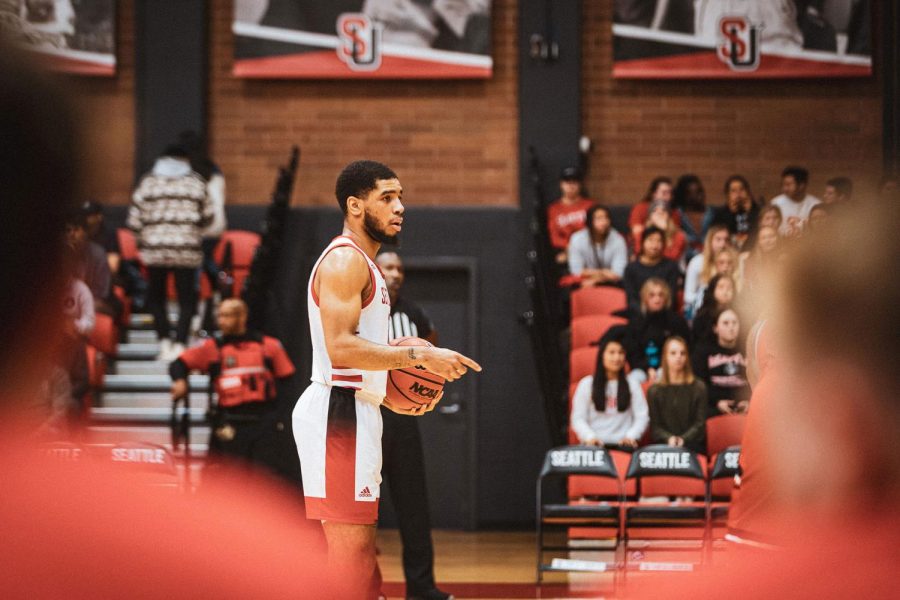 Terrell Brown led the Redhawks to their first win of the 2019-2020 school year during Tuesday’s matchup against St. Martin’s, October 22, 2019 | Javier Plascencia • The Spectator

Seattle University’s Men’s Basketball team looks to have a strong and successful season this year, coming off of an 18-15 record and some impactful injuries. The men look to gain and carry momentum after winning their first exhibition game 92-71 played on Oct. 22 at home against Saint Martin’s.

According to Head Coach Jim Hayford, the overall energy of the team this year is up, as many returning players are back in action and better than ever. As the season progresses, the health and well- being of each player continues to be a significant factor in their early success—but also a motivator for the team.

“This is a veteran team, and so they’ve been through some wars together. You know, we had a lot of great successes last year. We had a lot of adversity because of injury and I think that’s made us tougher,” Hayford said. “We’re going to be a good, tough team this season even though we’re playing a much harder schedule. I think we can do some big things together as a group.”

With the Western Athletic Conference poll (WAC) coming out and with the Redhawks ranked third in a pre-season poll. Hayford and the rest of the men look to overcome the odds. This motivation and drive can be seen through Senior Guard Delante Jones, who looks forward to taking on his final season as a Redhawk.

For Jones and many of the returning players, this season is one to bring them closer together and create opportunities for victory.

“We have a group that knows that to expect from each other and how to lean on one another,” Hayford said. “We’re just a really close family and just got really, really great guys who really love each other and play for one another.”

After overcoming much of the adversity faced last year with tough losses and injuries, the men’s basketball team is looking forward and is ready to tackle even bigger challenges and tougher opponents.

“The biggest challenge, obviously, is the quality of the opponents. The defending champion in the league, New Mexico State, is a very good team,” Hayford said. “So we got our work cut out just because we have some really, really strong opponents.”

As the season has just begun and new players have just been added to the team, men’s basketball is staying focused on their strengths and aiming for a solid execution of skills to face current and future challenges.

As Jones enters his final year, the true significance of the season is stressed throughout every practice and game.

The Redhawks will take the court again at home on Nov. 5 against the Pacific Lutheran University Lutes.

According to Coach Hayford, student support is of utmost importance to both the sport and the athletes— both himself and the team encourage everyone to show up and show out.

With the goals of both each individual player and the overall dynamic and momentum of the team in mind, Seattle U’s basketball team is looking to have solid results in WAC play and beyond.