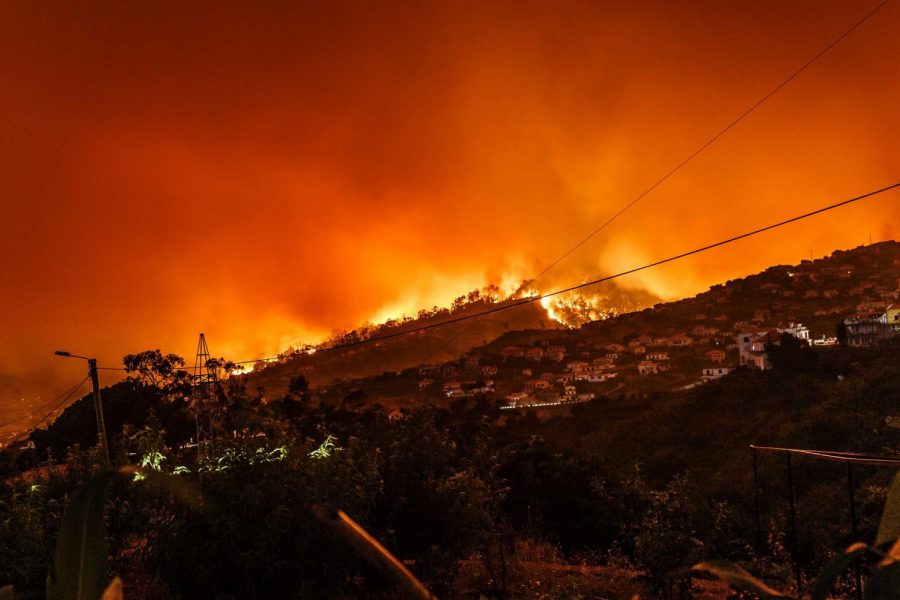 A natural gas leak forced north Seattle residents and businesses to evacuate on Friday. The Seattle Fire Department (SFD) said the leak was caused when contractors punctured a 2-inch gas line. Puget Sound Energy (PSE) was called to the scene by the Seattle Department of Transportation. As PSE workers tried to secure the gas line, a fire ignited and continued to burn for more than an hour. Three PSE workers were injured and taken to the hospital in stable condition. According to SFD, all impacted buildings were evacuated and no other injuries were reported.
California Residents Face Wildfires and Power Outages

Multiple wildfires, fueled by offshore winds, are burning across California. There are eight fires in total that have started in the last four months. The largest of the fires, the Saddelridge Fire in Los Angeles County, was last measured to be covering 7,965 acres of land and was 33% contained. So far, three people have died and approximately 100,000 residents have been displaced. Pacific Gas and Electric Co. (PG&E), California’s biggest utility company, cut power to almost 800,000 residents of Northern California on Wednesday. PG&E claims their imposed power outages are a preventative measure, as forecasts of strong winds bring an increased risk of fire. The power outages will last at least a week for some. With gusty winds moving down the coast and into Southern California, Wednesday’s power outages are only the first in a sequence of planned outages, expected to affect nearly 2 million people across 34 counties.
White House Declares Political War on Impeachment Inquiry

The White House is pushing back against the House impeachment inquiry into President Donald Trump’s actions. In an eight-page letter, addressed to House leaders and signed by White House counsel Pat Cipollons, the White House refused to cooperate with demands for documents and interviews related to the investigation. The State Department also blocked Gordon Sondland, U.S. Ambassador to the European Union, from testifying before House committees. “President Trump and his Administration reject your baseless, unconstitutional efforts to overturn the democratic process,” the letter stated. “In order to fulfill his duties to the American people, the Constitution, the Executive Branch, and all future occupants of the Office of the Presidency, President Trump and his Administration cannot participate in your partisan and unconstitutional inquiry under these circumstances.” House Speaker Nancy Pelosi responded to the letter, calling the White House’s claims “manifestly wrong.”
Syria, Turkey, and U.S. Involvement

President Donald Trump ordered U.S. troops in northern Syria to withdraw from the region as fighting continues to escalate between invading- Turkish forces and Kurdish soldiers. The Kurdish- led Syrian Democratic Forces (SDF) were major allies to the U.S. in the Western-backed campaign against ISIS in 2014. Casualties continue to rise on both sides of the Syrian border and fighting has moved into areas close to ISIS detainee camps. Trump’s call to abandon Kurdish allies in Syria has been widely criticized across the political spectrum. Those opposed claim the pullout is a betrayal of U.S. allies, and could lead to an ISIS resurgence in the destabilized region. Trump remains defiant, defending his decision on Twitter. “The Kurds fought with us, but were paid massive amounts of money and equipment to do so. They have been fighting Turkey for decades,” Trump tweeted.“It is time for us to get out of these ridiculous endless wars, many of them tribal, and bring our soldiers home. We will fight where it is to our benefit, and only fight to win.”
White Fort Worth Officer Kills Black Woman In Her Bedroom

On Saturday, Aaron Dean, a white police officer in Fort Worth, Tex- as, shot into the window of Atatiana Jefferson, a 28-year-old black woman, killing her in her home. Authorities say the Dean was responding to a call placed by a neighbor about an open front door. Body camera footage released by police shows Dean outside the home, looking into Jefferson’s bedroom window and shouting before firing the bullet that killed Jefferson. Jefferson was playing video games with her eight-year-old nephew at the time of the incident. Initially, Dean was placed on administrative leave after he shot Jefferson to death. On Monday, he resigned from the police force, was arrested and charged with murder. Jefferson’s family and their attorney S. Lee Merritt, a civil rights lawyer, are calling for an agency outside the police department to help investigate the killing.
Simone Biles Is The Most Decorated Gymnast In World Championship History

On Sunday, Olympic gymnast Simone Biles won her 24th and 25th gold medals at the World Championships in Stuttgart, Germany. Biles, 22, took home five of the six gold medals to be won, winning the top of the podium in team competition, all-around, vault, floor, and beam. She took fifth on the uneven bars. This is most likely Biles’ final world championships, and she finished with the most medals in history, surpassing the previous record holder Belarusian Vitaly Scherbo.