“Joker” A Hit With Audiences Amidst Controversy 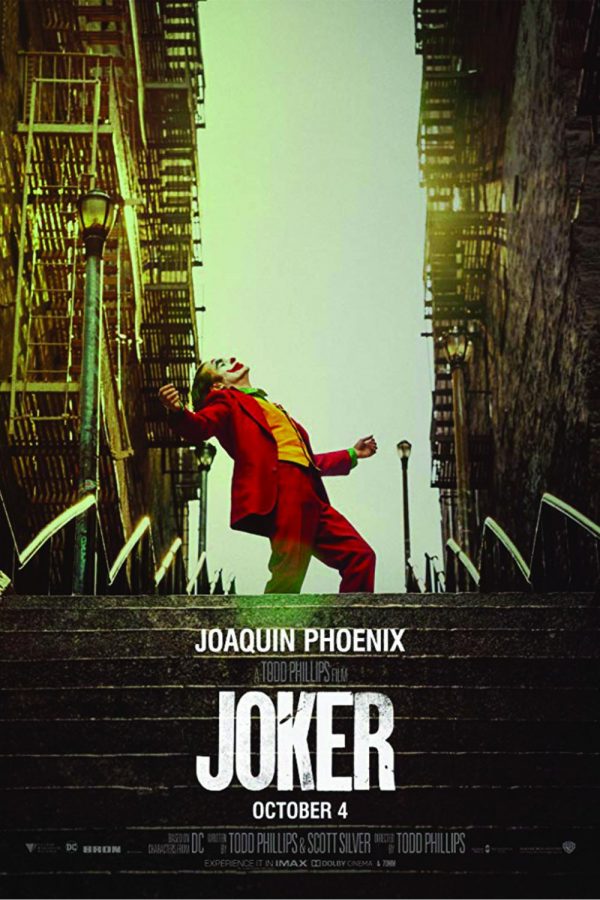 Todd Phillips’ “Joker,” the gritty new origin story for Batman’s most famous villain, premiered in theaters Thursday night. The film turns the character’s origins on its head and offers a darker, more realistic version of how the Joker became the criminal mastermind that we know now.

“Joker” follows Arthur Fleck (Joaquin Phoenix), a clown-for-hire and aspiring stand up comedian in Gotham City. The audience watches the mentally disturbed Fleck slowly descend into madness as he is bullied and forgotten by a cruel and corrupt Gotham City.

“Joaquin Phoenix turned in a terrific performance,” he said. “It was to be expected that he would turn in a good performance but I thought his work in ‘Joker’ was exceptional.”

Phoenix has garnered much Oscar buzz since the film’s release, with many critics anticipating a successful awards season.

Trafton did question certain aspects of the screenplay, arguing that the politics of the film were a bit incoherent and clumsy. He felt that the film could’ve gone further, arguing that the social critique was not as fleshed out as it could have been.

“I felt like they were on to something interesting by critiquing how our culture deals with issues of mental health,” Trafton said. “But I felt that there were some aspects of that critique that were a bit clumsy.”

This new origin story is steeped in contemporary issues of mental illness, gun violence and anti-corporate sentiment. The film’s depiction of these aspects has caused considerable controversy, easily making it the most talked about film of the year.

Joshua Haddock, a Seattle community member and longtime fan of the Batman mythos, understood and related with concerns over this film’s release.

Haddock agreed with those who have found the film problematic, adding that the film was difficult to watch at certain points. Haddock explained his concerns about potential copycat-violence, crimes that mimic sensationalized depictions of violence and how this film might inspire similar acts.

“The film definitely made me uncomfortable in ways that I have to sit with,” Haddock said. “I’m not sure how I feel about it.”

Credible threats of violence inspired increased security in theaters nationwide and forced several theaters around the country to refuse showing of the film, including the Century 16 theater in Aurora, Colorado, which was the site of the deadly 2012 mass shooting during the premier of “The Dark Knight Rises,” another Joker- centric film.

Despite the controversy and threats, “Joker” smashed box office records for its opening weekend.

The film brought in an estimated $93.5 million in North America this weekend, making “Joker” the highest- grossing opening in the history of October.

The film earned the Golden Lion—the top award at the Venice International Film Festival—, in September, which is a rare achievement for films based on comic books. Since then, however, critical reception has been divisive.

“The film is finally here,”Ani Bundel of NBC News said. “It turns out the piece of art that has caused such an uproar is nothing more than an incoherent, misbegotten and embarrassingly dull two hours.”

On the other side, however, is the seeming audience consensus. “Joker” is currently sitting at a 91% audience score on Rotten Tomatoes, a mean score of 9.1 on IMDb, and an overall rank of B+ on CinemaScore. The film brought in an estimated $93.5 million in North America this weekend, making “Joker” the highest-grossing opening in the history of October.

Trafton is not surprised by this division and is confident that this shows how the film will have a long- lasting impact on its fans.

“History will be kind to this film,” Trafton said. “It’s a reminder that film does have the power to move and motivate people, sometimes towards harmful acts, but other times towards positive change.”

Trafton is hopeful that this film will spark debate over mental illness and believes the film to be an empathetic call to action to change our attitudes towards how we approach issues of mental illness.

“Joker” is a film of questions. It asks many of our culture that demand critical engagement. How well the film portrays these questions is ultimately up to the viewer.