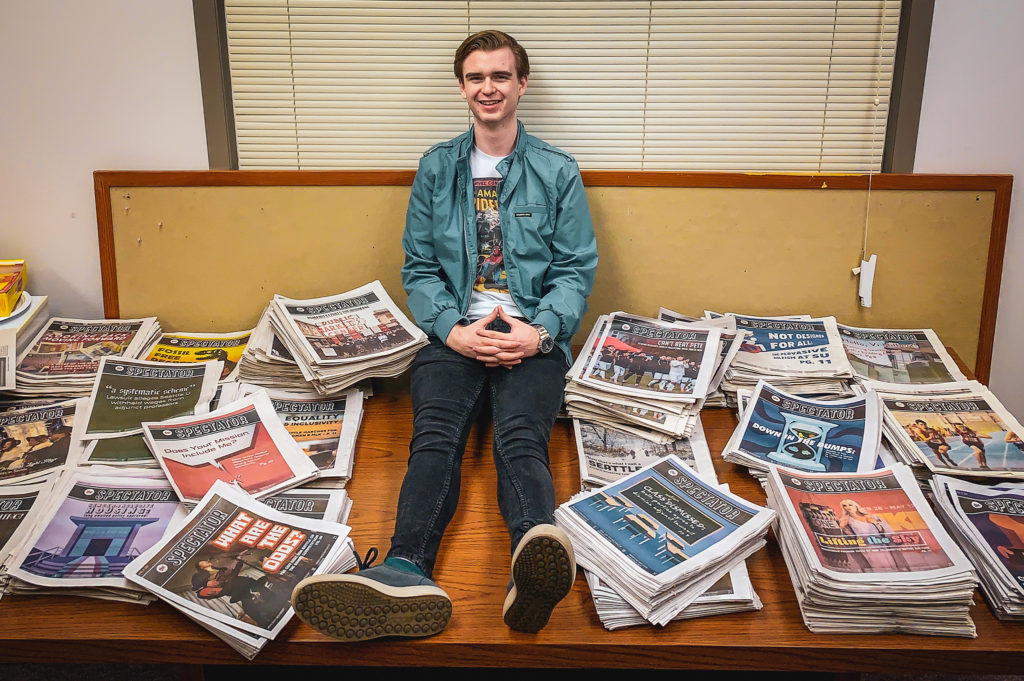 Jake Gyllenhaal, baseball and politics are a few of Alec Downing’s favorite things. With interests spanning from arts & entertainment to sports to news, he’s got every ground covered as he steps up to the position of editor-in-chief next year.

Coming into college, Downing was originally a business major. Before even stepping foot on campus, he changed his major during the summer and quickly got involved with The Spectator.

“I came to the first meeting and pretty much have gone ever since,” Downing said.

The Spectator provided a chance for Downing to find himself in the Seattle University community and he hopes that the same opportunity will be available to other students in the coming years.

“I was going through some struggles adjusting to college and getting involved in the paper and meeting all my friends through that helped me integrate into campus,” Downing said. “I want to be able to build that same kind of community for the staff next year and I just care deeply about the journalistic integrity of The Spectator and continuing all the great work we’ve done in the past few years.”

Even after the path towards journalism opened up, Downing still wasn’t sure what exact route to take. His initial interest fell with sports journalism, which led to him becoming the sports editor his second year.

“I got hired as a full-time staff writer and that forced me to go into news stories because there weren’t enough sports stories to take,” Downing said. “But that ended up helping me grow and find what I wanted to do in journalism.”

One pivotal moment Downing recounts as reshaping his entire journalistic career is the story he wrote with former editor Anna Kaplan about the mistreatment of Seattle U’s custodians. After camping out in the library until midnight, Downing and Kaplan spoke to one of the custodians through the bars in the library using google translate.

After the first article, Downing and Kaplan were approached by a dozen more members wanting to come forward and share their story, prompting another article.

“It was really emotional. They had really tough things to say and hear, but it was powerful,” Downing said. “That was hugely impactful and made me see first-hand the impact journalism can have and the impact I can have. From that moment on, I was pretty set on being an investigative journalist and doing hard hitting stories like that.”

Downing has the career aspiration of being an investigative journalist or editor, preferably somewhere local. Growing up in the area, his favorite baseball team is the Mariners and he’s a fan of Seattle journalists like David Kroman.
“Raise your hand, take a story, take a chance. Everyone is going to be there to support you and help you.”
With an editorial board consisting of almost all the same faces from this year, Downing will be leading an experienced group that he’s formed fond memories with.

“I think that there’s just a lot of moments,” Downing said. “There’s something every single layout that just cracks me up.

Downing plans to keep delivering investigative stories next year, as well as help the future generations of The Spectator grow and develop. His goals for next year include creating a sense of professional development among the staff.

“I think it’s important to step into a mentorship role. I’m excited to see what everyone else can do, how they can continue to grow,” Downing said.

Downing encourages any student interested in writing to come to a meeting and see if it’s a fit.

“Raise your hand, take a story, take a chance. Everyone is going to be there to support you and help you,” he said.

Even with his goals and visions for next year, Downing does have some controversial opinions: one of them being his love for Hawaiian pizza.

“You can put pineapple on any pizza, any food, and it’s probably going to be good,” he said.

Aside from keeping up with news, politics and sports, Downing has a soft spot for comics and the “Star Wars” series.

“I’m going to try to think of a non- ‘Star Wars’ book so I don’t look that nerdy,” Downing laughed, trying to think of his favorite book. But it’s hard to hide that part of him as he sports a Spider-Man graphic tee under his blue Members Only jacket.