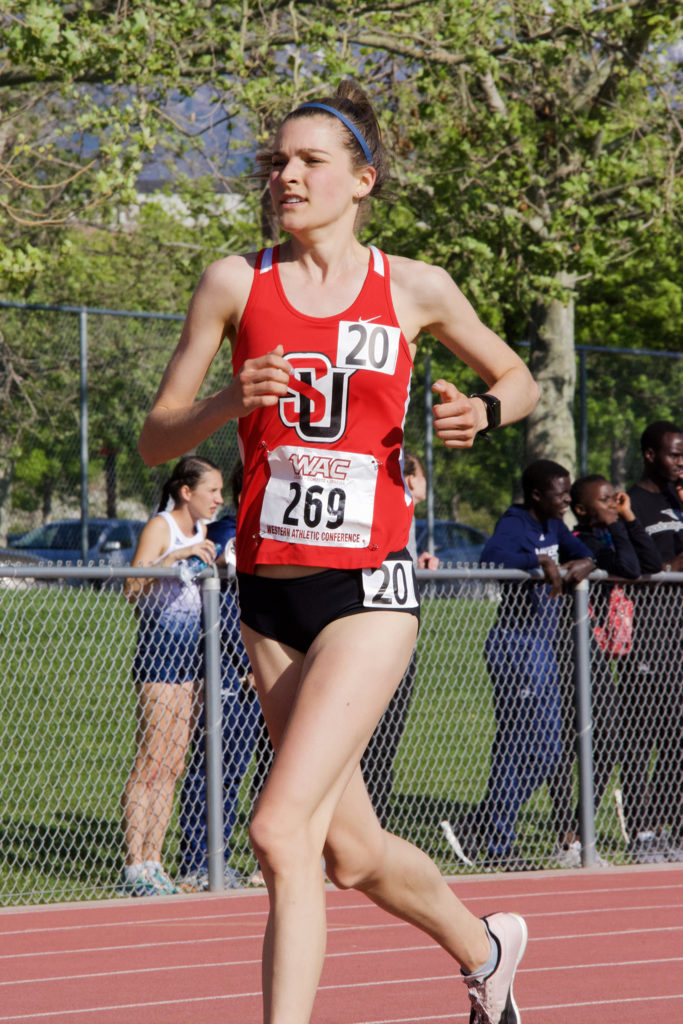 NG: Can you talk a little about how the season went, leading up to and especially heading into the Western Athletic Conference (WAC)?

CG: This season started off not too bad! I think right after indoor, we were kind of just getting into workouts, doing our normal long runs. We were getting excited for sure, so it’s just crazy to think that conference seemed so far away. But every single week [Coach Kelly Sullivan] would send out an email and be like, “One more week closer! One week closer!” The pressure would build a lot, but it helped with not having to race every weekend, which is really nice before you go to conference because it’s such a big deal. The intensity increased every single week, the workouts increased, and we did HIIT, two weeks before, peaking in our workout, which was nice. It wasn’t getting any harder but it was just trying to maintain. So it was a really stressful but exciting time.

NG: I know that you raced two running events at the WAC. You did your first 10k, so congrats on that! Can you talk a little about how your races went and how the conference was overall?

CG: As a transfer, I have not raced at WAC, so both were my first conference meets. The 10k was very interesting, especially in altitude, for everyone. That was a mind game in itself. The downfall of it was I knew I probably wouldn’t do the best at the 5k after my 10k but I was really proud of just ending my 10k and finishing in general. I finally saw how sprinters also do multiple events. I’m not used to doing multiple events, so it made it seem like worth going all the way to Utah to run even more, rather than just running one thing. But the races went well and again, not my best 5k, but I finished, so that was nice. Timewise I was really happy with my 10k.

NG: You talked about how you’re a mid-year transfer, so how has that transition been? Especially since you came in winter quarter with the coaching staff, the new team dynamic, and coming in indoor season and everybody was just starting up.

CG: It was weird, for indoor I wasn’t competing. [Sullivan] and I actually talked and I wasn’t supposed to compete at all this year, so it was just really cool how welcoming [Sullivan] was and how amazing the team was. At my old university there was no track team at all, so it’s really cool to have so many different people doing different things. I love it so much, I would never trade this for the world. I think that, personally for my training, [Sullivan] was really careful and he slowly would ramp me up until we got to full outdoor season, but I think that it’s just meeting me where I was. He meets everyone where they are. I think the coaches work really well together, the team in general is so great. I thought it would be a lot harder, but the team just makes it so easy to just jump right in.

NG: Looking ahead to cross country, since you guys come back in the middle of summer and you’re entering your first full year as a Redhawk next year—are you excited for anything in particular or any specific moment you’re looking forward to?

CG: I haven’t ran cross country in like two years, but that’s my favorite. Track was not my favorite, so I’m really set for cross country, but I think that [Sullivan] was just going over how we don’t really have anyone graduating, so our girls team and our guys teams are doing really strong this year. It’s exciting to think that I’ll be part of that. I just think that so many of the girls were trying to get healthy, same with the guys too; we’re all just trying to stay on track and do our summer training so I think it’s gonna be a really really great year if everything goes as planned.

NG: Is there a favorite memory or moment as a team thus far? Has there been a best part about being on the team so far?

CG: How much we hang out, even during practice. I love practice. I love when we went to San Francisco and just getting to go to California with the team was so much fun. We also altogether would go to ice cream sometimes or we’ll all cook together. It’s cool that the team really fosters friendships outside of practice which I feel like sometimes people are only friends because they’re on the same team. But I feel like everyone here genuinely wants to be your friend outside of practice too. All of the little get-togethers we have are always great.