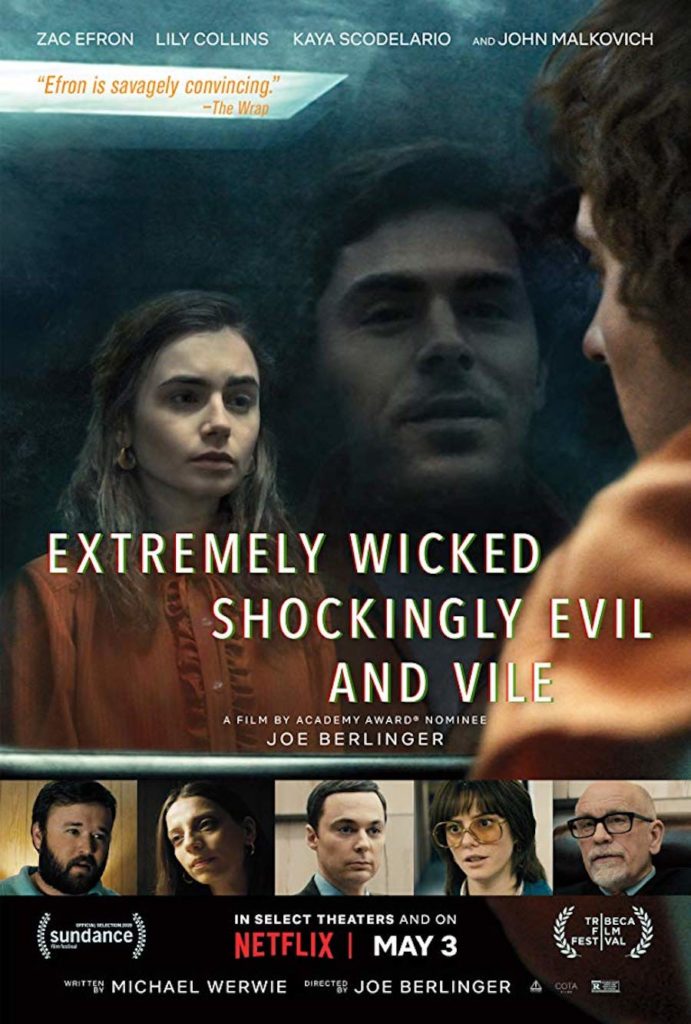 Zac Efron, who is known for playing a heartthrob on the big screen, took up a new role for the Netflix original movie, “Extremely Wicked, Shockingly Evil, and Vile” in which he played 70s serial killer, Ted Bundy. Efron plays the role of Ted Bundy almost too convincingly.

A few months back, Netflix released a docuseries following Bundy’s crime spree. The docuseries included real footage of Bundy’s trials as well as recordings of Bundy during his time on death row. The series was well received by many because it revived the interest surrounding Bundy and how he got away with such heinous crimes for so long.

Many people were concerned after the Netflix trailer release due to the fact that people found Bundy to be charming—despite being a serial killer—and that the movie would romanticize the killer.

However, casting Efron was a perfect choice. Efron is good-looking and not known for playing dark roles, similar to Bundy who was not suspected to have been such a dark person because of his looks. Also, the side-by-side comparisons of Bundy and Efron (when in character) are eerily similar.

Ted Bundy is notoriously known for manipulating people with his alluring personality. His interviews and televised court appearances shocked people because despite him being a heartless killer, he for some reason encapsulated audiences with his attitude.

In no way does this movie glorify Ted Bundy. It highlights the devastation and panic he caused in the United States. There is nothing more than the fact that Ted Bundy was manipulative. The movie is truthful by demonstrating his behavior, but it does not mean he is glorified in anyway. The movie, while a dramatization of the docuseries, is for the most part accurate in displaying the kind of person Ted Bundy was and the following he gained.

Although it is true some of his victims were decapitated, he never told how he did it. He was a very elusive person as he tried to avoid letting people know about his victims. That way, he would always have power over them, even after death.

Before I watched the movie, I expected it to follow the crime spree. I expected there to be backstory to the murders, maybe following Ted. For example, I thought it would show a reenactment of his day at Lake Sammamish and how he lured two girls into his car.

However, after watching the movie, I realized there was no need to tell more of Bundy’s story. He killed people. Everyone knows how awful he was, and that’s the end of his story. However, in the media, people don’t discuss the effects on loved ones.

Ted Bundy movies and documentaries have been done over and over, yet Netflix decided to do that while spinning it in a different way to make it be different. Even though it is a movie based on Bundy’s story, it delves deeper into Liz Kloepfer’s perspective.

Due to the movie being more focused on Kloepfer, the movie is nothing like one would imagine. The movie strays away from following the entirety of Bundy’s storyline and instead focuses on Bundy’s then-girlfriend. Kloepfer was a single mom who began dating Bundy and stayed with him despite the warning signs she saw.

Kloepfer suffered while Bundy went through trial after trial. She had no clue what was going on because to her, nothing was wrong. He would always tell her that everything was fine, and that he could never be the person to commit these terrible acts.

However, despite the movie itself being an entertaining and informative movie, there were some inaccuracies. The inaccuracies are just minor details, but a bone-chilling scene was added in which Ted writes one simple word on the glass barrier to Liz to tell her how he decapitated one of his victims: “Hacksaw.”

To add to the effect of this movie, Liz Kloepfer herself talked to the movie cast. Lily Collins, who played Liz, was able to explore more about her story and bring attention to her view. Because of the well-researched role, the movie does have credibility despite its flaws.

This movie points out how easy it is to be manipulated. Zac Efron delivers a believable performance to where the audience could understand why Liz could not believe that he was the ruthless killer he was.

“Extremely Wicked, Shockingly Evil, and Vile” not only has a stellar cast, but it also has the credibility and freshness to make watching this movie worth skipping those Friday night plans. Prior to watching the movie, I would advise watching the tapes to see just how accurately Efron captures the essence of the manipulative serial killer while Collins tries to see past the manipulation.