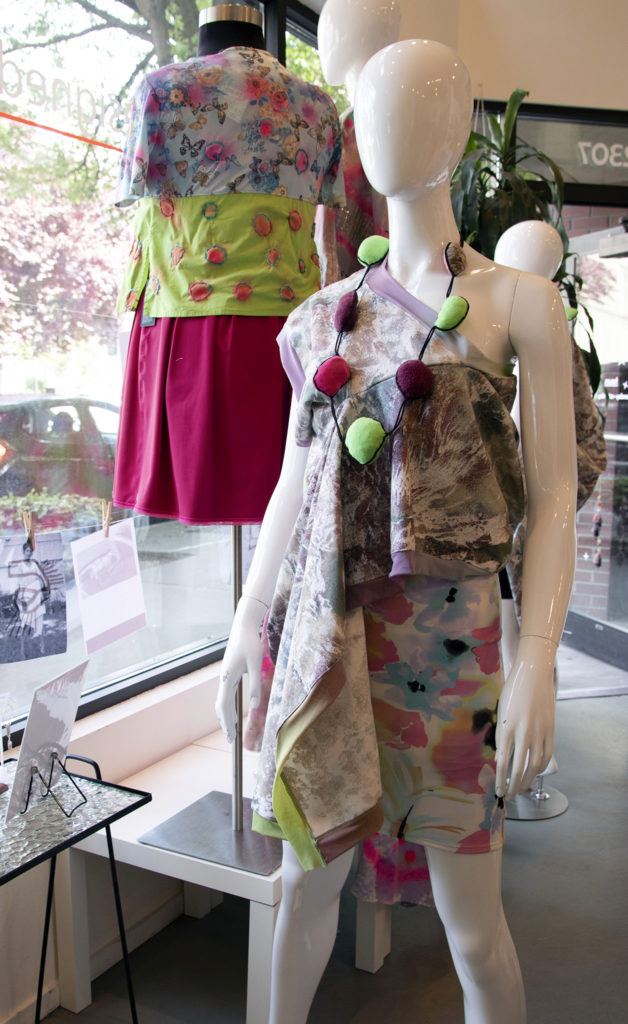 Zero-waste Seattle designer, Janelle Abbott, revealed her newest collection at Sassafras on Friday with a trunk show. The collection—JRAT “Brutal, Right?”—was made entirely by hand and heavily influenced by brutalist architecture.

Abbott likened her collection—which features vibrant paint, denim, lace, and a huge curtain from her aunt expertly collaged into a one-of-a kind piece—to herself at age 13.

“[The collection] is kind of girly and silly, but it also has this very industrial, hard edge to it,” Abbott said.

“I wanted to be a part of the revolution,” Abbott said. “Reducing the ecological damage fashion has done up until this point and also changing the way everyone is able to participate in fashion is incredibly important.”

Abbott also discussed her design process and all that went into assembling her latest collection.

“The zero-waste design methodology requires markers to dictate the aesthetic of the garment, so every pattern piece fits together like a giant puzzle and nothing is thrown away in the process of creating. I felt that brutalist architecture being so rectilinear and so much about geometry, was a great place to look for inspiration,” Abbott said.

“This collection has a lot of different textures layered onto it. I’ve always been very interested in trying to use un-usable things, and this very organic collection of materials eventually lead me here,” she said.

“I worked with patchworking fabrics together, in a more traditional sense, to sort of mimic the blockish nature of brutalist architecture. In total I think the collection took about 2 years to make.”

Sassafras Seattle, the venue of Abbott’s trunk show, is a clothing store on First Avenue dedicated to sustainable and ethical fashion. Amy Tipton, the owner of Sassafras, has known Abbott for about six years and often sells her clothing. Tipton described the mission of Sassafras as combining environmentalism with the promotion of local women.

“All of our designs are made by women and almost everything in our store was made by the person who designed it. All the clothing we sell is designed and made between Vancouver, BC and Portland, Oregon,” Tipton said. “We have six in-house designers with their own brands and about 50 percent of our clothing is made downstairs in our design studio.”

Katy Flynn is one in-house designer at Sassafras with her own label, KFLY Seattle. Flynn’s designs are greatly influenced by sustainability and the celebration of fem-identifying bodies of all shapes and sizes.

“I tried to keep my line as environmentally conscious as possible,” Flynn said. Everything in her line is reversible, wash-cold, and air-dry. She worked with bamboo jersey—a material that needs less laundering—and stretched silk that was discarded because of imperfections.

Flynn talked about some of the problems with the fashion industry as well as the hardships that come with trying to run a small business as ethically and sustainably as possible.

“The feeling frenzy of when material is made to the people that sell it— there’s a job for everyone, so many people are involved, and it’s really capitalistically driven,” Flynn said. “I went through a 1,000 yards of fabric last year in approximately 10 different colors, but even on that level, I don’t demand enough material to afford the bolts of cool eco-material.”

“Us small designers, I think, are sometimes doing a better job by functioning with throw-away pieces of material and paying people a living wage,” Flynn said.

“My goal is to grow a business that’s paying people real wages to live in the city, to take away some of the elitism around fashion, and to create jobs for other artists within our community,” Flynn said. “We’re facing an environmental crisis that is really extreme. I think it’s up to all of us growing these businesses to be really mindful of that and not be toppled by demand.”