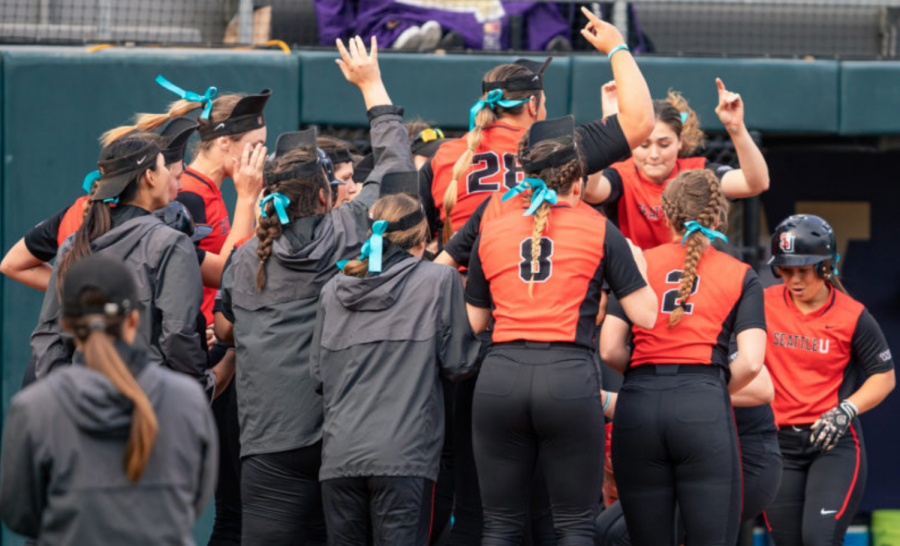 The Seattle University Softball team has been breaking records all year in what has arguably been the most successful season in program history. A series of three matches ended in an unfortunate elimination loss to Mississippi State, but a victory against Fordham University marked Seattle U’s very first Division I NCAA Tournament win and the team’s 40th win of the season. The team also became the first Western Athletic Conference (WAC) program to win an NCAA Tournament game since 2015.

After soaring to the top of the WAC regular season standings and winning the WAC tournament, the team traveled to Husky Softball Stadium for the NCAA tournament. Their first opponent was the Mississippi State University (MSU) Bulldogs.

Redhawks celebrating with Carley Nance at the plate following her home run against Mississippi State in the first round of the NCAA regional on Friday, May 17, 2019.

Redshirt Sophomore Pitcher Carley Nance started the game for the Redhawks. The Washington native held the Bulldogs scoreless through the first two innings.

Graduate Student Infielder Breanna Timmons then worked a one-out walk and eventually came around to score on a single by Sophomore Outfielder Ally Choate. This put the Redhawks ahead 1-0.

In the bottom of the third inning, the Bulldogs came back with a vengeance, scoring three runs. Both teams struggled for dominance until the fifth inning, when the Bulldogs tacked on two additional runs, putting the score at 1-5.

Senior Second Baseman Kaylee Ree started off the seventh with a walk, bringing Nance to the platew. The Tahoma High School graduate swatted a home run to right field to bring the Redhawks a bit closer at 3-5. They were, however, unable to find any more scoring opportunities and dropped this opening game. Despite the loss, Head Coach Geoff Hirai was still proud of the tenacity his team showed during the match.

“Though we didn’t play great in the first game, we fought until the end,” Hirai said.

Since the Redhawks were unable to take down the Bulldogs, they went into an elimination match against the Fordham University Rams—who lost against the University of Washington.

Senior Pitcher Andie Larkins was able to keep Fordham at bay, giving her team the opportunity to load up the bases and make their move to score. Fordham put up a good fight throughout the game, though Seattle U fought harder. Larkins never allowed Fordham to score a single run, pitching a complete game shutout.

The Redhawks secured the win with a final score of 1-0. Alyson Mattrioti, a junior utility player, led the inning off with a single and scored the only run of the game in the eighth inning. A sacrifice bunt by Viggiano got her into scoring position and Choate brought her home on a single. With this hit, Choate broke the single-season program record, earning 75 total hits in the 2019 season.

With one victory under their belt, the Redhawks moved into their rematch game against the MSU Bulldogs.

Larkins held off MSU for the first two innings, but in the 3rd MSU quickly took a three-run lead. Seattle U answered back in the next inning when Catcher Bailey Thompson swatted a home run to bring the score to 3-1.

In the fifth, MSU continued to push the Redhawks, adding two more runs on a homer and then in the sixth, adding two more runs on top of that. Seattle U continued to fight, both Junior First Baseman Madison Cathcart and Senior Second Baseman Kaylee Ree hit homers in the sixth, making the score 7-3. Ree broke the program’s career runs record with that score.

The Seattle U Softball team could not close the gap in the final three innings and was eliminated from the tournament with their loss, though went home with several more record- breaking performances.

With the conclusion of their season, the team secured several individual WAC season records.

Choate had the highest batting average this season in WAC at .397, while Cathcart had the most RBIs with 55.Thompson ended the season with an impressive second most home runs in the WAC conference at 13, and Cathcart tied for third with 12. Viggiano tied for first place for the number of stolen bases this season with 20.

Nance ended the season with the best ERA in the conference at 2.00 and was also able to secure second place for wins with 17, with Larkins in fourth place at 14. Sophomore pitcher Shianne Smith had the fourth most strikeouts with 104, with Nance close behind at 102.

Looking forward to next season, Hirai has already set goals for the team.

“We’ve worked to build a program and try to get better every year. Our RPI was great but we want to get into the top 25,” Hirai said.

Looking back on the past four years, Hirai can’t help but be most proud of winning the WAC title with the current senior athletes on the team.

“They’ve been with me since day one. It was a special moment,” Hirai said. 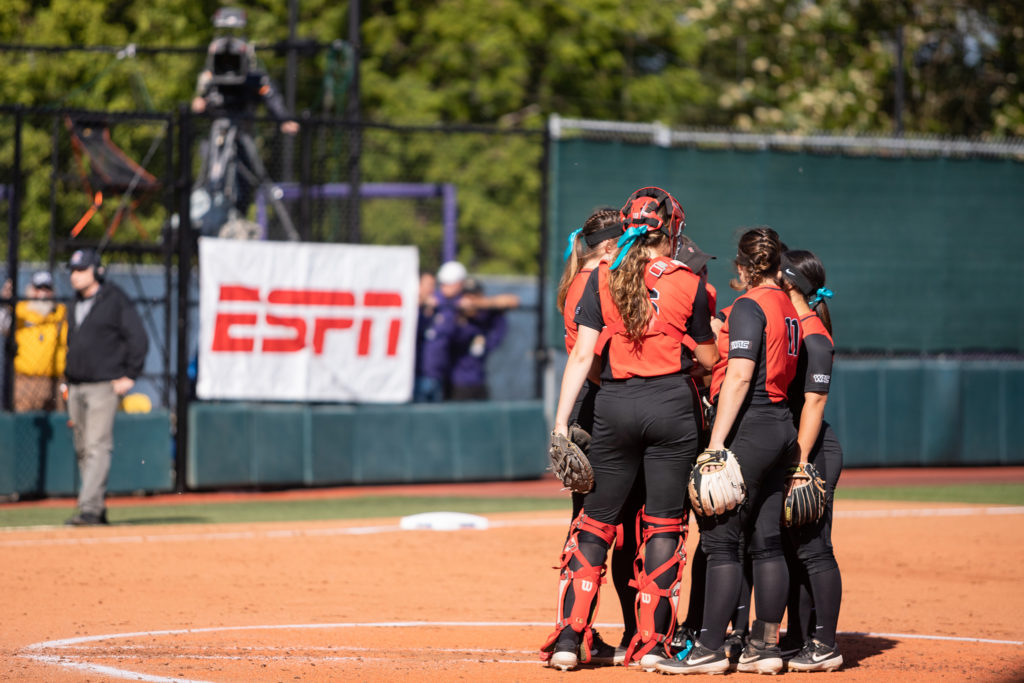 Infield meeting on the mound with pitcher Carley Nance and catcher Bailey Thompson.

With the conclusion of the tournament, the team will say farewell to these seniors before moving on into next season.

One such senior is Ree, who saw incredible success on the team after being named WAC softball hitter of the week March 25, 2019. Ree was also one of few named All-WACC Second Team in 2018.

First Baseman Emma Mitchell will also be graduating. Mitchell hit a walk-off single this season against Grand Canyon University, which ultimately won the team the game.

Moving into next year after such a successful season, Hirai is working to prepare his team for the attention they will likely receive.

“Our biggest challenge will be dealing with success. We’ll have a target on our back. We’ve been the underdog. Now we have good returners,” Hirai said.