Seattle University’s South Asian Student Association (SASA) hosted the Holi celebration at the Union Green in observance of the Hindu festival of color. The day included traditional Indian treats, like mango lassi, samosas, and Hindu music. However, the main part of the event was when participants covered each other in brightly-colored paint chalk which symbolizes the rebirth of spring.

The tradition originated from two legends. Aside from Holi symbolizing the greeting of spring, it is also indicates the triumph of good over evil. This takes root from the story of Hiranyakashipu, a king who believed he was immortal, and his son, Prahlad, a devoted worshipper of the Hindu deity Vishnu, which upset the king. As the story goes, Vishnu appeared in the form of a half-lion, half-man and killed Hiranyakashipu, and thus, good triumphed over evil.

The other story often associated with Holi is a story of love. A man with blue skin, Krishna, fell in love with a woman, Radha, but was worried that she would not feel the same way because of his skin, so Radha let him apply color to her skin as a sign of acceptance and love. This is the reason people apply color to each other’s skin on Holi.

At Seattle U, this part of the event is purely about having fun within a community. No religious ceremony is involved which encourages anyone to join regardless of their beliefs. Each color used in the event is said to symbolize different aspects of the celebration. Blue is for Krishna, the blue-skinned god; green is symbolic of rebirth and new beginnings; red is the color of marriage and love; yellow, the color of turmeric, represents happiness and is often used on auspicious occasions.

The festival of color is considered one of the most revered and celebrated festivals of India. The vibrancy of colors represents the utmost joy and enthusiasm everyone feels during the holiday and the warming presence of having friends and family around to embrace a new season of life.

At the beginning of the event, participants were able to try authentic Indian food, such as samosas, a fried dish filled with potatoes and peas, and mango lassi, a refreshing mango drink, in the Hunt building. Before the throwing of the colors started, Senior Ranjani Sundaresan explained the significance of the holiday before counting down to the first round of colors where friends scrambled to get each other’s white shirts covered in neon colors.

As the president of SASA, Sundaresan described how the event is fun for students to participate in.

“Those not part of the culture can come regardless of beliefs or ethnicity and learn about the culture and traditions,” Sundaresan said. 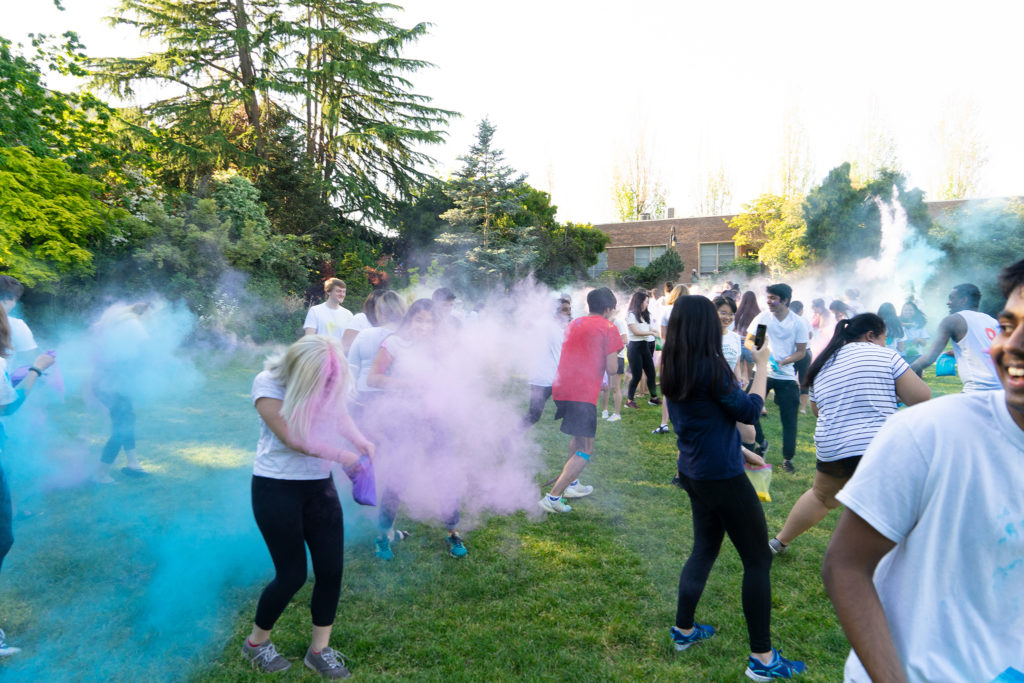 It was Sophomore Michaela McKasson’s first time attending the event. She mentioned how it is great for people to experience and learn about new traditions and holidays. She appreciated that the university is welcoming of different cultures.

“Seattle University does well in supporting different traditions,” said McKasson. “Religious groups on campus are outreaching to other students and although I’m part of [Japanese Student Union], I love to partake in different celebrations; they’re always supported.”

This was true for SASA and the Holi celebration, as students of all different beliefs and ethnicities attended the event. The club members brought new knowledge and awareness to attendees, hoping to reach out to the community.

Shivani Chaudhary, the vice president of the club, usually celebrates with her family, going to the temple to worship then retrieving bags of powder.

“I think the way we structure the event serves as both a fun and educational purpose, Chaudhary said. “I appreciate that people know what it is, and even if they don’t, they still attend. It’s not a hugely known holiday, so people coming, learning about the culture, and being excited about it is an awesome thing to witness.”

The event brings the community together to have fun and bring in the new season, but also shows the culture and the reasoning behind the practices. Chaudhary also mentioned how important the experience is for her.

“For my friends and other students to want to attend the event, it means a lot that they come together and celebrate as a community, appreciating and respecting our culture.”