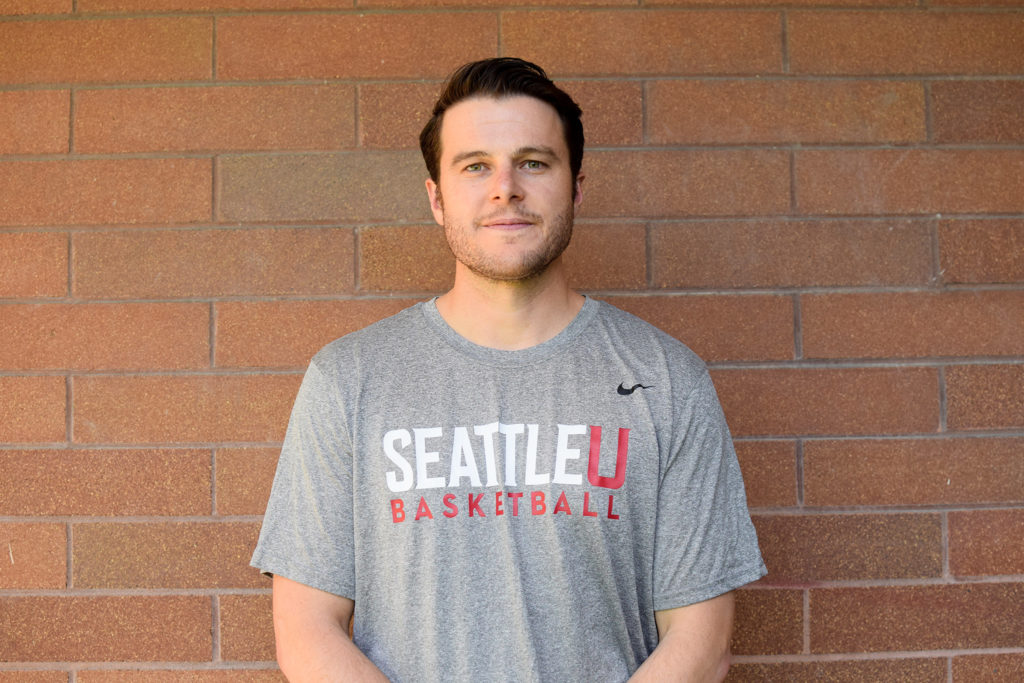 Before arriving at Seattle U, Pribble spent four years at the helm of Saint Martin’s, racking up an 83- 40 record and leading the Saints to two consecutive NCAA Division II appearances, reaching the Sweet 16 last campaign.

“I really enjoyed my time at Saint Martin’s—it was a great experience,” Pribble said. “I’m really excited about [Seattle U]. I think Seattle University is a fantastic school and have great momentum in the basketball program going right now. I’m going to do everything I can to really help them improve.”

Bringing in Pribble to the Redhawk coaching staff was an easy choice for head coach Jim Hayford. Besides Pribble’s notable resume in his time at Saint Martin’s, Pribble served under Hayford at Eastern Washington University where the two formed a close relationship coaching the Eagles and sharing memories of their work together like beating basketball powerhouse Indiana on the road.

“Alex took a losing program, and four years later they’re a top ten Division II team in the country,” Hayford said. “It really strengthens our staff. It brings a lot of experience, and familiarity because we’ve worked together.”

Prior to his time at Eastern, Pribble spent time as an assistant at San Francisco State University for two years and coached at Tamalpais High School in Mill Valley, California prior to that. As a player, Pribble played four years at the University of California Berkeley where he also was a graduate assistant. Pribble explained that his familiarity with the West Coast basketball community will bring in-depth recruiting to the Redhawk program, adding an extra component beyond what’s seen on the court.

With the Redhawks entering their third year under the Hayford rebuild of the program, Pribble adds a new offensive dimension to Seattle U, focusing mainly on interior post- play that Junior Forward Mattia Da Campo says can benefit him and the team’s play immensely going forward.

“He’ll learn how to coach me, I’ll learn how to learn from him and we’ll find a relationship together,” Da Campo said. “I’m excited and am looking forward to this. He’ll be my position coach so I know we’ll be spending a lot of time in the gym together.”

After a 2018-2019 campaign with no seniors, Seattle U basketball moves forward into the 2019-2020 season with a young core with good team cohesion, building off their successes and downfalls from their previous 18- 15, 6-10 Western Athletic Conference (WAC) record. Because of this, it was important for Coach Hayford to bring in someone to continue to help lay the foundation for his vision of the program.

“When you look at his successes at Saint Martin’s, you can see the strengths of who he is as a coach,” Hayford said. “His ability to be innovative on offense, I think he’s really great at building a brotherhood amongst young players so we can build good team chemistry.”

“I want to contribute wherever I can,” Pribble said. “Being able to get with the players one-on-one to help them become their bests is something I can help out with.”

With five months to go until the basketball season resumes, Hayford, Pribble, and the rest of the Seattle U coaching staff are preparing, improving on last season. They are working out the kinks to get the best out of their players, recruiting the newest generation of Redhawks, and getting ready for war against a tough WAC competition like Grand Canyon University and New Mexico State.

However, with the hiring of Coach Pribble to complement his prior relationship with Hayford, Redhawk fans have every right to get excited for next year’s product on the hardwoods.

“Having worked with [Hayford] before, I understand the culture put in place here, and I think it matches up with everything that I enjoy about basketball,” Pribble said.