Love and Information: A Student-Directed Show 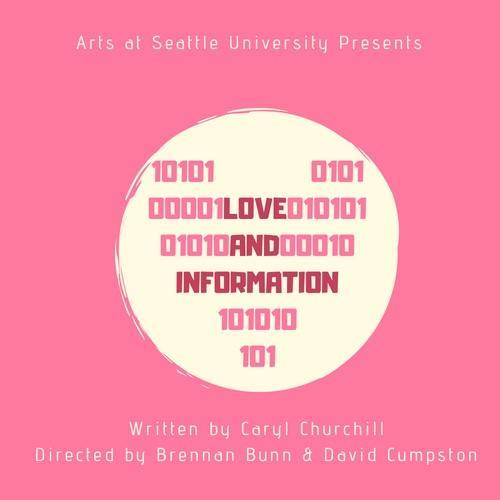 Seattle University’s theatre department puts on a wide variety of unique shows during the course of the school year, but one show this spring is different as it puts students in the driver’s seat of their own full length production.

“Love and Information” is an anthology play that follows multiple characters and different stories that all follow the general theme of human connection in an age of new technologies. Its story has a “Black Mirror” look with equal parts dramatic horrors and dark humor. The theatre department chose to put on the show, but was given to two theatre students to direct the project.

The series has two acts and a vast variety of characters, and aims to tell their stories of human connection and technology. The show does an excellent job of exploring the themes in a fun and inventive manner while maintaining a balance between levity and seriousness. The play’s nature as an anthology contributes to a freshness that keeps every scene unique and fun, and allows the directors to focus on and explore different themes in the work.

This is one of the first student- directed shows to happen in several years. The students were allowed to direct a show for the main lineup of Seattle U theatre shows as their senior capstone projects.

Most of the shows at Seattle U have a remarkable amount of student involvement, with students as actors, stage crew members, and assistants from the scenery department to the costume department. This is done so that the students can practice and hone the crafts that they hope to use one day under the tutelage of an expert in the field.

David Cumpston, a senior theatre major, and Brennan Bunn, a senior theatre and film studies major, are the co-directors of the show. They have both been involved in the department since their first year, working in various capacities in the program on multiple different productions.

“The two of us knew that we were interested in directing,” Bunn said. “ So after getting a lot of experience in the program our advisor, Rosa Joshi, approached us and said, ‘How would you feel about directing during the main stage season?’”

It was a bit of an adjustment for the two as they took on the work for the first time. For Bunn, the adjustment in a new leadership position was a change in responsibility.

“One of the difficult things is that I am a student and I’m still learning these things,” Bunn said. … “I have to be in this position, but I still don’t know everything. I still make mistakes, but I have to be okay with that and learning from them.”

Hannah Matthews, a senior theatre major with a minor in arts leadership, was the head costume designer for the project and has also worked as the assistant to the faculty costume designer in the past. She put together costumes for the entire cast multiple times over, as each person has multiple parts in the anthology.

Working with a pair of first-time directors could have been tough, but according to Matthews, the process went very smoothly.

“I think I was nervous at first because I didn’t know what they would be like as directors, but really it was amazing how they both came to an idea together,” Matthews said. “Their thoughts on the picture is cohesive, they never fight about it. They are doing two separate acts but it just flows really well.”

Bunn and Cumpston were coached through the process by the faculty and staff through weekly advising meetings where they met to discuss the progress of putting the show together. This was an important part of the process because it helped provide some support to the first time directors.

“I’ve learned lights, and scenic, and sound from these people and it’s different because you’re used to them being a professor, instructing you what to do. Now it’s shifting to us working together, them asking me what I want to do,” Cumpston said.

Part of the fun for the pair of directors was working with a team that they have known for several years through the course of the program. The two directors split the show into two pieces, each taking a part so as to not step on one another’s toes.

“I have really enjoyed [working with Brennan]. We’ve worked as stage managers, we’ve taken classes, so it’s really nice to be able to work with a friend,” said Cumpston. “It’s like doing a group project but you actually really enjoy who you’re doing the project with.”

“Love and Information” premiered this past week and will continue to have showings Wednesday to Saturday at 7:30 p.m. and Sunday at 2 p.m. until May 19.