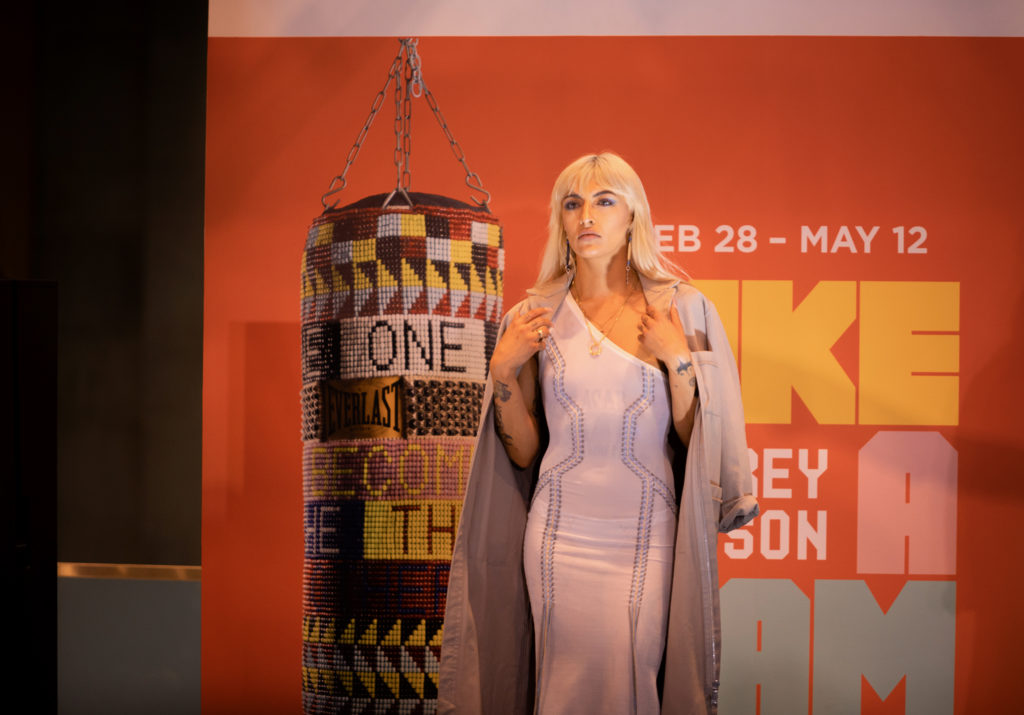 Evan Ducharme's design work on the runway during Thursday's LIFTING THE SKY: AN INDIGENOUS FASHION SHOW on May 2, 2019.

The Seattle Art Museum (SAM) hosted an event on May 2 in partnership with yəhaw̓ (pronunciation: yahowt), an Indigenous-led year-long project to give exposure to their artists and creatives. This event, Lifting the Sky: An Indigenous Fashion Show, was brought together by curator Lisa Fruichantie. She was able to bring together Native artists, musicians, designers, and performers from across the Pacific Northwest for a night to celebrate Indigenous culture. The booms of the Tribal pow-wow drums that were heard throughout the night drew audience members’ attention center stage.

The name yəhaw̓ means, “to proceed, to go forward, to do it,” according to Vi Hilbert in her telling of “Lifting the Sky”. “Lifting the Sky” was originally told by Chief William Shelton in 1923 about the power of a whole community coming together to lift the sky that was once too low to walk under.

Yəhaw̓ brings together a community of support for Indigenous artists and paves the way for their work to be showcased. The year-long event includes art installations, performances, workshops, trainings, and an exhibition that can be seen at King Street Station until Aug. 3. Lifting the Sky: An Indigenous Fashion Show is just one event of many that are part of yəhaw̓.

The Native Fashion Market that was placed on the first floor was filled with Native designs such as earrings, clothing, and prints. All the vendors were Indigenous designers showcasing the beauty of their heritage through their artwork. Their handmade pieces represented their Native culture and their ancestors by incorporating traditional aspects into their work.

One of the vendors, Paige Pettibon, was raised on the Puyallup reservation and conveys her indigenous traditions through weaving, beading, painting and sewing. She was selling beautiful beaded earrings made from organic materials that ranged in color and length; however, her staple is porcupine earrings.

“We have a pretty good community where we support each other,” Pettibon said. “It was a really good way to give me, my nieces, and some children in the Indigenous community that are good at art to become involved.”

Pettibon and all the vendors present at the event are able to connect with their indigenous community and ancestors through the medium of art. Their community–which has been destroyed by racism and inequality in the past–has now rebuilt itself and become stronger by coming together to defend their heritage. Yəhaw̓ and Lifting the Sky were created through the strength and creativity of this Native culture in order to showcase their talented community. 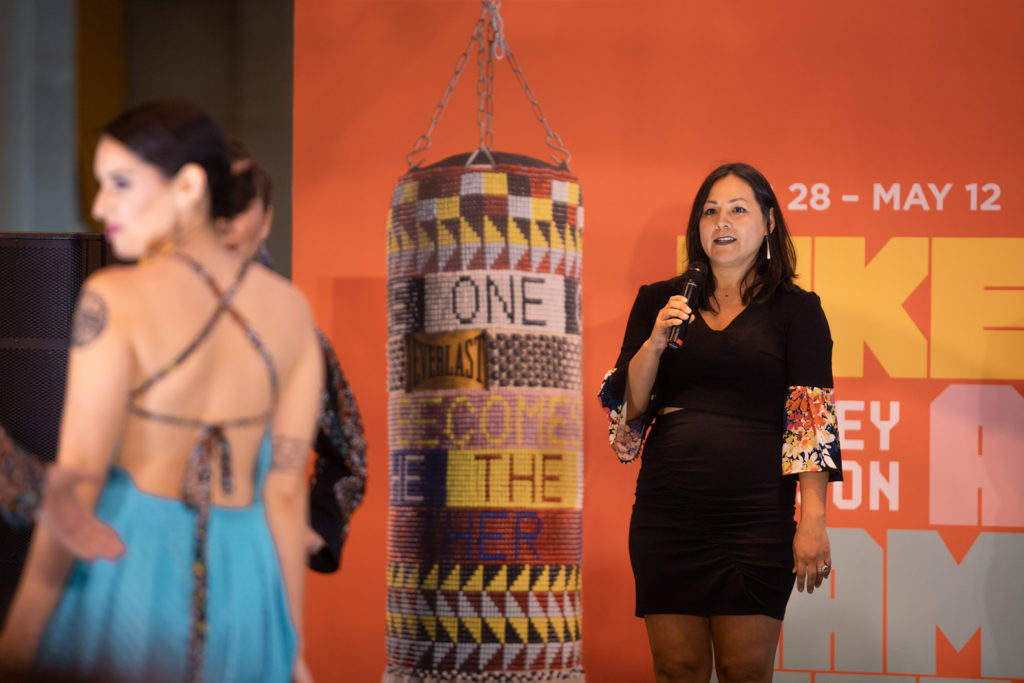 Meka Clothing’s founder and designer was on-stage to represent her line for the show.

As the show began, the crowd doubled in size and the energy around the room resulted in loud claps and cheers from the audience. Abriel Johnny-Rodriguez started off the fashion show with seven designs. Her designs included red, black, and white outfits and incorporated Native salmon designs on each piece.

“In my tribe one of the colors is black and that is to reflect the warriors–we wanted to reflect the women warriors. Pops of red are to reflect the theme of Lifting the Sky and represent those that are connected to the other realm,” Johnny-Rodriguez said about her designs. “The infinity bead design represents living in an Indian world and the Western society. As you’re beading, you’re connecting this generation to all the wisdom that comes from past generations.”

As the fashion show ended, curator Lisa Fruichantie went on stage to talk about the importance of this show and what it means for this community.

“I was inspired by how many other Indigenous designers have been recognized these days and it gave us an opportunity to showcase that,” Fruichantie said while she gave her closing remarks about the creation of this event. “We are indigenous, we are still here.”

This celebration of Indigenous artists and their community to showcase their talents also, falls in perfect timing with the SAM’s “Like a Hammer” exhibition by Jeffrey Gibson. Gibson comes from a Cherokee heritage and his artwork draws on the different cultural experiences he has had. His communities, both Native and Western, have had the most impact on his work, much like for the designers in Lifting the Sky. Gibson’s exhibition will be showcased at the SAM until May 12.