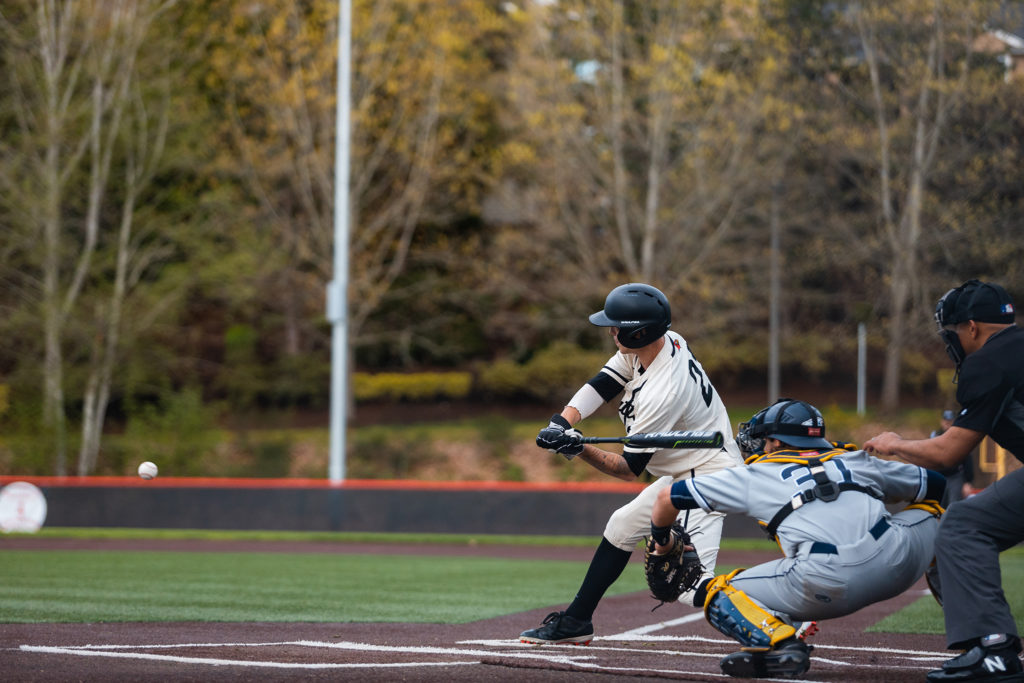 Gavin Rork up to bat against the University of British Columbia on Tuesday, April 23, 2019.

Baseball
The Redhawks played the University of British Columbia on Tuesday, April 23. Sophomore Drake Maningo earned a single, and later scored from the help of his teammates First-year Jason Harayda and Senior Kyler Murphy. First-year Kyle Sherick hit a home run that proved to be the difference in the 2-1 game.

First-year Desmond Parisotto pitched for seven innings, only allowing one hit during those innings. Sophomore Jarrod Billig closed the game for pitching.

The Redhawks played another visiting team on April 24—the Lewis and Clark State University Wildcats. First-year Max Cuenca had his first career start. He struck out five Wildcats and gave up four runs on four hits and a walk. The game ended with a score of 5-2 in favor of the Wildcats.

Baseball took a trip to Edinburg, Texas to resume conference play against University of Texas Rio Grande Valley. On day one of the series, Billig set a new career-best in strikeouts during the 6.1 innings he pitched. He also gave up three runs on six hits and three walks. Mazzone, First-year Julian Kodama, and Junior Chase Wells each earned two hits, Seattle U briefly took a lead on a sacrifice fly by Kodama. UTRGV broke out for five runs in the seventh inning, giving them the win by a final score of 7-3.

On day two of the series, O’Brien, Sherick, and Senior Max Werner all had two hits. Starting pitcher Josh Thompson, a first-year, gave up four runs. Reliever Ethan Christianson could not get any relief though as the Vaqueros scored a total of 11 more runs in the later innings, resulting in a loss for the Redhawks, 15-7.

Baseball ended their trip in Texas on Sunday with a close loss, 7-6. O’Brien and Wells both brought RBI’s forward while Werner blasted a home run as well. The Redhawks played strongly as they outhit the Vaqueros 11-10 and ended up going into a 10th inning.
Track & Field
Track and field traveled to Corvallis, Oregon where they participated in the Oregon State High Performance Meet.