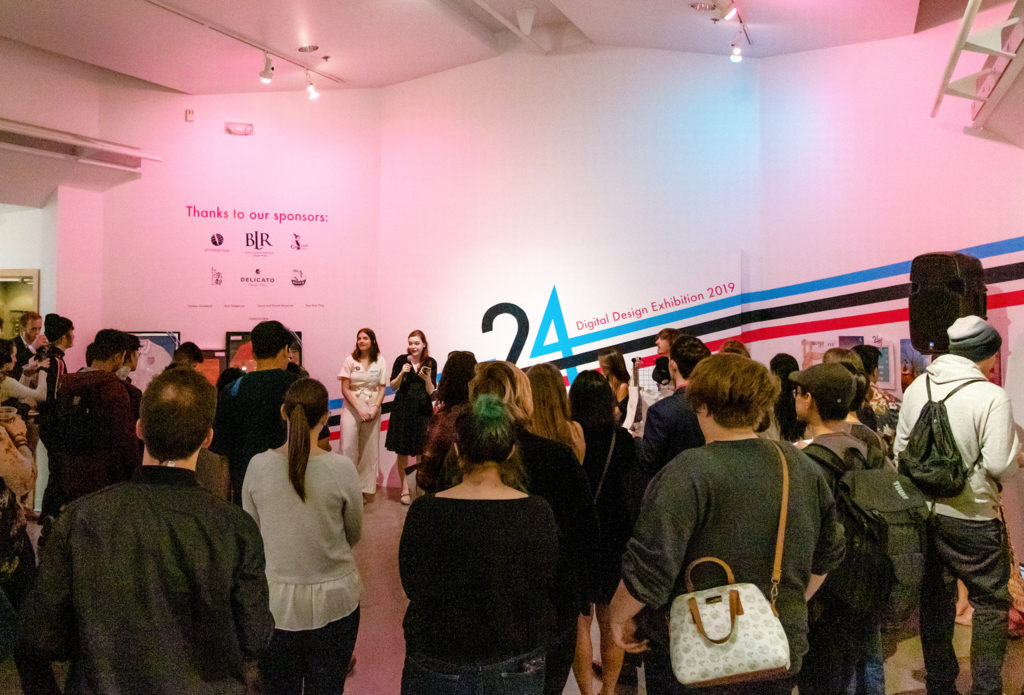 The Vachon Gallery was specially decorated this week for the Digital Design Exhibition, an event run by students graduating from the program to show off all their hard work during their time at Seattle University. Surrounding walls were covered by clean, professional posters and the wide space in the middle of the room was occupied additional products created by the student artists.

The room buzzed as people laughed and music played, the crowds milled around looking at all the hard work their peers had done. This was truly a non-traditional art gallery, with pop music and a lively assembly admiring the works in stark contrast to the stereotypical thought of pristine halls with hushed patrons.

The theme of the exhibit is “24/7,” which is both an homage to the convenience store as well as a reference to the long nights that the students’ stayed up to get their projects done. The theme was meant to express the student’s goal of making designs that were beautiful, efficient, and convenient.

The exhibit was clean and well-organized in an effort to showcase these ideas of beauty and efficiency, and the environment was made to be convenient and intuitive in order to provide as much accessibility for the visitors as possible. Emily Mozzone, a fourth-year digital design major, is one of the director co-chairs and helped come up with the theme for the event.

“We wanted to do something more fun and lighthearted—something that moved away from the idea of high design, something that was more accessible to people,” Mozzone said.

Annie Jameson is a third-year French and international studies major who attended the event to support friends who have projects in the showcase. While not typically a gallery visitor, Jameson found the exhibit very inviting and interesting.

“I think it’s a cool idea. It makes it more relatable for college students, this idea of a convenience store that’s open 24 hours,” Jameson said. “That’s really how a lot of college students are, staying up until absurd hours, which makes it definitely accessible for students.”

The gallery featured many different types of designs that the students created, including package design, identity design, and user interface design. Posters displayed information on a variety of subjects from mycoremediation mushrooms to the multiverse to typefaces themed around emotions like grief and heartache. A few highlights included mock-editorial designs that featured striking visuals and evocative narratives. There were also physical product designs which not only did they create the designs for product advertisement, but also created the projects and displayed them in the gallery.

The artists have been working on these projects for the last four years as part of their Capstone Project, which is the culmination of all of the skills that they have learned over the course of their time at Seattle U.

The cohort of 23 students has been planning for months trying to create the projects that they will display, but they also all worked to put together the whole program, from the organization to the construction to the event space. The whole space was transformed by the team for the event; dividing walls were put up for display and the space was repainted for the exhibit.

The showcase also featured a small shop selling prints, shirts, bags, and stickers designed by the students. The gallery also held a silent auction that ran throughout the night where items such as soccer jerseys, paintings, and antique posters were sold to raise money. All of the profits will go to Art with Heart, a charity that helps children in the Seattle area who have been through trauma or have faced adversity. They provide products and services to try and help kids in the community cope and find a creative outlet in their lives.

Greta White, a fourth-year digital design major and one of the director co-chairs explained why the charity was chosen.

“As we’re all artists, we wanted to support the development of local artists because we know how important it is to impact people with these resources,”White said.

Anyone can go and view the hard work that the entire digital design team put into their capstone projects at the exhibit, which will be available for the public to view in the Fine Arts Building’s Vachon Gallery until May 16.