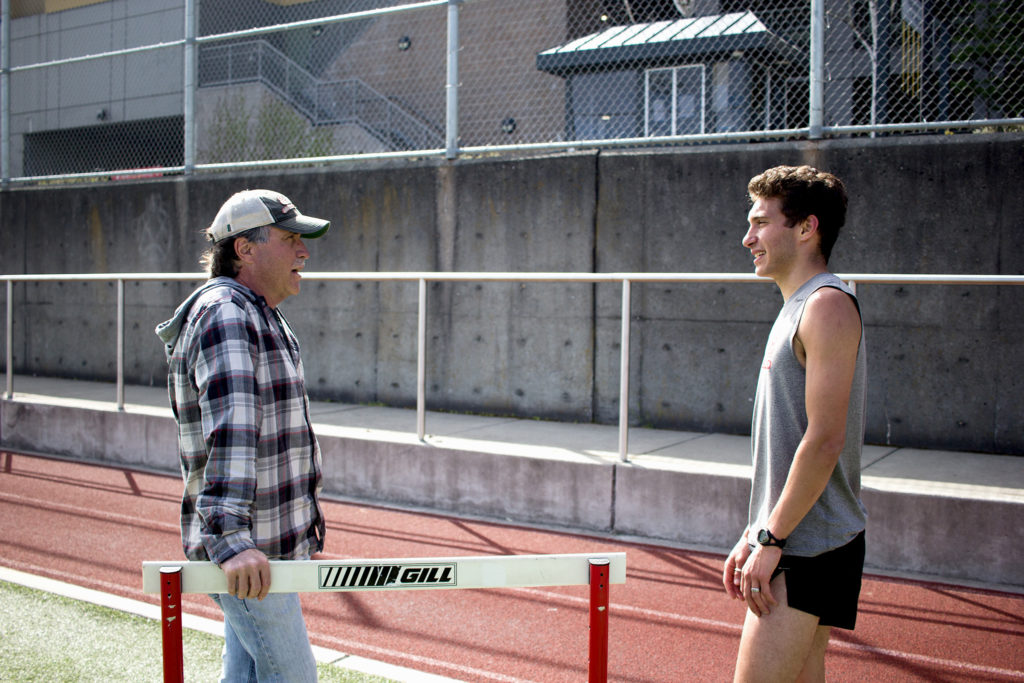 Just under a year and a half ago, Kelly Sullivan took over as Seattle University’s new track coach. Last year, his hard work translated into an incredibly successful first season in which his team won four conference titles, and so far his second season at Seattle U is looking to be just successful.

Sullivan came to Seattle U after hearing from a close friend that a position had opened up at the school.

Sullivan said that after his initial interview to be the head coach, he was sold.

“I met with 10 of the returning athletes, a mix of both males and females in a variety of events. I met with them for about an hour, which was the start of the interview, and I was so impressed with them,” Sullivan said. “They were so passionate about their sports. It was obvious to me that they were very invested in who the next coach was going to be.”

He began his time at Seattle U shadowing the previous coaches as he wanted to slowly integrate himself into the program.

“I didn’t want to come in and tip everything upside-down. I couldn’t expect them to trust me right off the bat, I had to gain their respect and appreciation,” Sullivan said.

Ben Monk, a fifth-year track athlete at Seattle U, said that from the very start Sullivan made much-needed changes to the team.

“The team atmosphere switched from being held accountable to do certain things, to holding ourselves accountable to see results we wanted,” Monk said.

“We used to have training that was a lot of mileage and a lot of work to the point where we weren’t healing as well. Kelly made sure our bodies were reacting well to the training,” Monk said.

Monk says the change in atmosphere has helped the team, and him personally, reach new heights. After a 16-month injury kept Monk from racing a large portion of his college career, he was able to get back on his feet with Sullivan’s help.

“His training worked a lot better for my injuries and the atmosphere helped me get back into shape; I’m running personal bests now,” Monk said.

Jacques Hebert, a fifth-year athlete, also attributed his success this year to Sullivan who pushed him to continue his track career.

“I probably wouldn’t have ran for a fifth year if it wasn’t for Coach Kelly, but I’m really glad I decided to stick with it. I’ve been able to improve on my personal best,” Hebert said.

Monk noted that under Sullivan’s leadership, the program is far more focused on the individual.

“Kelly is extremely dedicated to each individual athlete. We have long emails with different sections of day-to-day workouts that range from individual work, to groups of six. Before Kelly, we used to get an overall plan and you were either in that plan or you weren’t” Monk said.

This season, Hebert has not only surpassed his own personal bests, he’s set school records. Hebert broke the Seattle U record for the mile this season, then broke his own record, and then broke it again with a final time of 4:09.62.

Sullivan broke a record of his own when he was able to bring in 33 new recruits, the largest recruiting class in program history. He noted that bringing in new recruits was key to bringing together a complete track team.

“We have made more of an effort to add throwers, which we did this past year with four freshman ladies, and put more emphasis on the 400 and 1600 relays for both men and women than in years past,” Sullivan said.

Sullivan also made it a point to incorporate the existing team into the recruiting process as well, building an even more cohesive team and positive atmosphere.

“The student-athletes were heavily involved in this process as well, when we bring the recruits on campus the students host them,” Sullivan said.

Looking forward, Sullivan hopes to continue the team’s trajectory of success with a simple, yet effective, set of goals.

Even with the team boasting some impressive achievements in his short time here, Sullivan still feels that the relationships he has built are the most important accomplishment of his time at Seattle U so far.

“In the end, you coach people to see people accomplish things that they didn’t know they were capable of doing. That’s what has kept me coaching all these years.”