Seattle U Poetry Slam Is A Slam Dunk — With Words 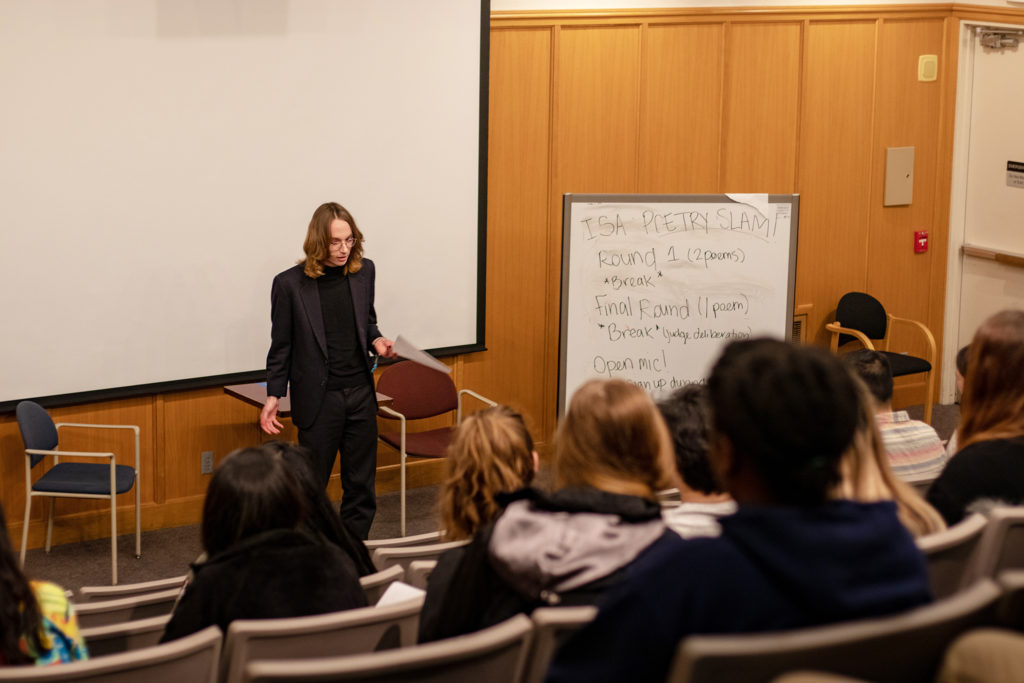 Roses are red, violets are blue, poems are powerful, as are students at SU. Although poems are most traditionally depicted as words on paper, a concept known as a poetry slam has become increasingly popular among writers worldwide. With a competitive undertone and the opportunity for poets to read their works aloud to audiences and judges alike, poetry slams have become rather common at schools—Seattle University being no exception.

The Indigenous Student Association (ISA), a student-run club at Seattle U, hosted its third annual poetry slam this past week. The club, a cultural and identity-based organization, vies to create a stronger awareness and authentic presence of the indigenous peoples within the Seattle U community while also providing a “home away from home” and support network.

Seattle U prides itself in empowering leaders for a just and humane world, and ISA is giving students just that opportunity. Senior English major Sena Crow, treasurer and financial officer of ISA, explained the reasoning behind the initial startup of the event and its continuation throughout the years.

“It was right after the inauguration, so I feel like there was a need for art expression, and I think that’s part of why we had it,” Crow said. “We decided to hold it again because it went so well the first time—we want to put on events that engage with the campus.”

Furthermore, the club is donating a portion of the proceeds it raised through button sales to a local non-profit organization, Mother Nation. Junior Hanna-Marie Lucero, president and executive director of ISA, connected the importance of the poetic get-together to Mother Nation.

“We wanted to focus on something relevant in the native community, so we focused on indigenous women. In Canada, there’s a high statistical rate of native women that are victims of homicide and rape—there’s not a lot of coverage of it,” Lucero said. “It’s a movement, and we are trying to raise awareness and make change. We came up with buttons and we wanted to donate to Mother Nation.”

Mother Nation aspires to both celebrate and inspire the success of Native American families. With informed healing services customized for every person, Mother Nation strives to advocate for the issue at hand while helping solve it simultaneously. Weekly programs and scheduled events promote change, and Seattle U now plays an active role.

Poetry Slam, although small when compared to events put on by Mother Nation, was coined successful this year. A large turnout translated to happiness on the organizational side of the event. The event proved noteworthy through not just sheer size and participation, but its ability to foster a sense of community, as Lucero noted.

“I really love it—it makes me happy,” Lucero said. “Just growing up, it’s always nice to have a sense of community. It’s nice to be there, to support people; we’re able to create a space where people feel supported and feel at home in a sense. A place where they can be safe, makes me happy—it’s nice to provide a space like that.”

Participants were able to feel this sense of community and safeness firsthand. Although technically a competition with judges and an audience watching, the support was evident throughout. Participation was highly encouraged and those standing in front of the crowd reading their own works were complemented by snaps, claps, and a plethora of ooh’s and aah’s from onlookers.

In the first round, participants read two of their poems. After a short break, one final poem was read before the judges came to a decision. Sophomore Michael Pazen was awarded first place following the two rounds.

Poetry slam was most certainly a slam for its participants and organizers this year. A large turnout and a sense of community garnered from free snacks like popcorn and cookies, button sales, and an open-mic session after the initial competition provided every participant or listener a chance to share and partake.

Sign-ups for the event were simple; filling out an online Google document was all it took to secure a spot in the competition. If you or someone you may know is interested in finding a community where creativity is valued—especially poetry—ISA and Lucero have an event for you.

“We want to create a space on campus where students can share. It’s more intimate and not as big, because I don’t think there’s been another poetry slam on campus. It’s a creative outlet for people.”