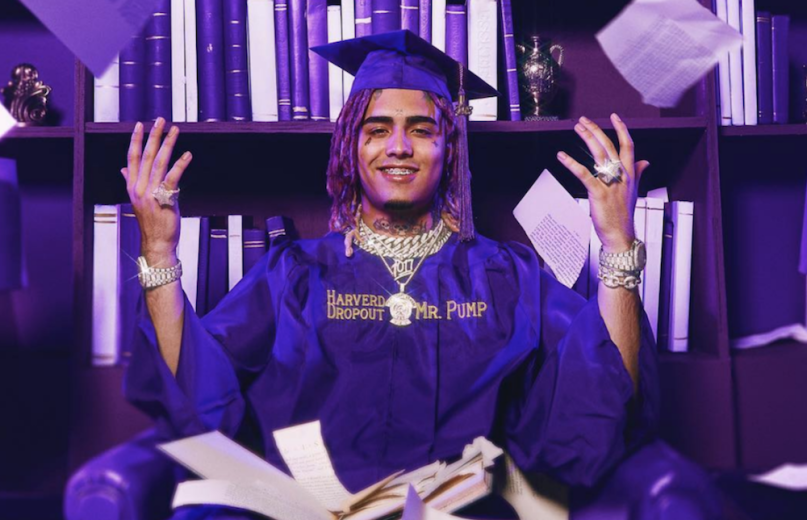 Gazzy Garcia, famously known as Lil Pump, is one of the most prolific faces of new age rap. With his triple platinum hit “Gucci Gang” off his gold self-entitled album “Lil Pump” and platinum hit “I Love It (feat. Kanye West),” Pump has made a reputable name for himself in the music industry and proven his ability as an artist.

“Harverd Dropout,” Pump’s highly anticipated new album—scheduled to drop on Pump’s birthday, Aug. 17, 2018—was delayed because Pump and his manager had “lost the album.” Pump was subsequently arrested on Aug. 29 in Florida for driving without a license and the album release was pushed back to Sept. 14, when it was delayed again. Finally, after nearly five months of waiting, fans are able to listen to Pump’s highly anticipated sophomore project.

Was it worth the wait? For fans of Pump, “soundcloud rap” in general, and in your face trap music, you will not be disappointed.

Let’s get one obvious thing straight— Lil Pump is no lyrical savant. Most of his songs contain the same subject matter: getting expensive cars and clothes, flexing on haters, having sex and doing drugs, and an almost funny brand of what I can not yet determine as arrogance or idiocy. He consistently raps over bombastic, in-your-face trap chords and his lyrics in the chorus can be too repetitive. I bet many never want to hear the phrase “spent 10 racks on a new chain” ever again.

Whatever Pump lacks in originality, he more than makes up for with his energetic delivery. He is able to expertly ride a catchy beat and make an earworm hook out of nearly anything. On the album’s opening song “Drop Out,” Pump exclaims on the hook how he “dropped out and got rich,” tying into the album’s title which was based on an instagram post where Pump told fans he was admitted to Harvard but hated it and left. His stuttered delivery on this track is incredibly catchy as he takes control
of the techno, unfiltered beat.

“Nu Uh” sounds like a lot of other songs on this album. Like I said, Pump has a certain formula that you can expect. But while his last project had many short songs that felt as though they were unfinished snippets, the songs on this album are longer and build upon what he has done to produce better structure and flow. On “Nuh Uh” for example, Pump speeds up and alters his flow in the middle of verses, giving the track a nice level of variety and spontaneity that makes listening to his irreverent lyrics fun.

“I Love it (feat. Kanye West)” was a song I initially hated when it was released a few months ago. While I originally took the song as crude and oversexualized, it started to grow on me. First off, it is really hard to not like a Kanye produced beat. Additionally, I realized that Pump and West weren’t objectifying women as much as they were praising their superstar lifestyle and admitting to sexual fantasies. Being controversial is not something Pump is afraid of, and I have to commend him and his music for that.

“ION,” featuring Pump’s childhood friend and partner in crime Smokepurpp, gives off the raw soundcloud vibe that made the pair famous and rise to become 2018 XXL freshmen. By this point the pair have unbelievable chemistry. Parts where Purrp comes in to lay a verse right the instant after Pump finishes his and vice versa make it feel like they’re two separate people speaking from the same mouth. Plus, how can you go wrong with a feature from Riley from “The Boondocks?”

“Be Like Me” is in my opinion, Lil Pump’s best song to date. Pump has been dissed for ripping off Lil Wayne’s brand of melodic, high velocity of rap. And he fully embraces it, even having Wayne on the track. Pump, in the vein of Eminem on “The Real Slim Shady” and “Hate Me Now,” is calling out copycats and haters in the best way he knows how—by fully embracing his brand of silliness, swag, and unapologetic attitude while riding an addictive, 2005-esque beat.

The tracks “Off White” and “Vroom Vroom” are admittedly terrible and that is coming from a Pump fan. I’m thinking these were more intended to be lean-inspired visions rather than actual songs, because a four year old could have written these two. However, these two songs do not detract from the overall album.

If you do not like Lil Pump or new age rap, this project will not sway you. But for moderate listeners to avid fans of hip hop and rap, Harverd Dropout delivers Pump’s signature style while refining the musical qualities that have made him a pop culture sensation.