“Happy Death Day 2U” Falls In The Shadow Of The Original 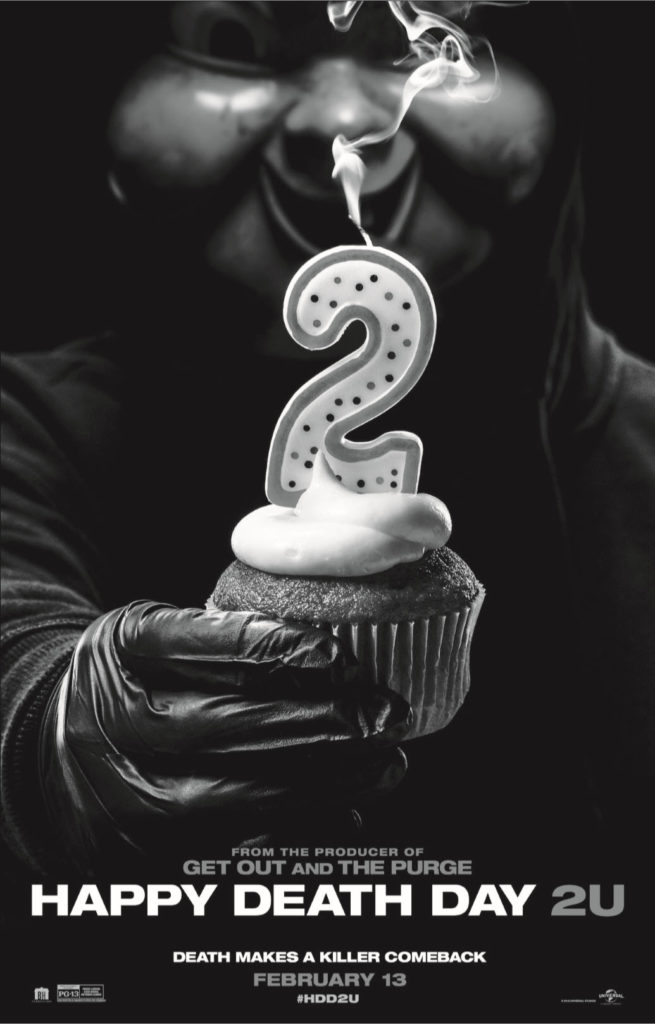 Movie goers looking for some tongue in cheek horror might find their sweet spot with director Christopher Landon’s “Happy Death Day 2U,” though the sequel feels eerily similar to its predecessor “Happy Death Day.”

“Happy Death Day 2U” picks right up where it’s predecessor left off, with protagonist Tree (Jessica Rothe) navigating through a looping day with a person in a baby mask trying to kill her. However, she is not in the clear yet when it turns out that her boyfriend Carter’s (Israel Broussard) roommate Ryan (Phi Vu), has just become stuck in the same day with another killer in a baby mask. This sets up a series of actions that throw Tree right back into the thick of this Groundhog Day meets slasher comedy in order to set things right again.

Landon also returns to deliver some of the same style he brought to the original to the sequel as well. Similar to the first “Happy Death Day,” Landon picks out slasher genre tropes with a dash of dark comedy that give the sequel the same non-self serious feel that worked a treat in the original. He understands that both “Happy Death Days” play on classic tropes and really plays it up—admittedly sometimes too much—but it’s still enjoyable.

Rothe returning as Tree delivers in almost every scene she’s in, whether she’s in a building tracking down the killer, in a comical scenario of living the same day repeatedly, or even throwing the emotional punches that this film delivers. Because of that, you genuinely care about what happens to Tree and every time Landon focuses the story on her, it’s all the better for it. Without her, this film does not work.

“Happy Death Day 2U” also does a decently good job of expanding and fleshing out the background characters we only saw small glimpses of in the original. Also, this sequel—thankfully—tries to explain the occurrences of the original that were somewhat infuriatingly left unanswered. The lack of answers at times gave the second movie a more sci-fi feel. It also tries to branch out from the cycle of seeing many the same events multiple times since the same day is being replayed over and over again by skipping many of them entirely, which I think was a good choice that kept the new material a little more fresh.

Unfortunately, not everything in the sequel feels fresh. While the charming tones of the original are present throughout much of the film, some of the more major plot points feel like a
copy and paste from the first movie. It is understable that certain events repeat because this is a film about living the exact same day over and over again, however, when major plot points and character decisions feel exactly like the original, it begins to take away from the viewing experience of the sequel.

The sequel changes the type of comedy slightly as well in an effort to be conventionally funny. Detrimentally, not all of these jokes land, and “Happy Death Day 2U” is much funnier when it returns to its dark comedy roots. Giving the same feel with different plot points would have helped the tension of the film, but completely compromising the freshness of the tone that many loved in the original would have given a more familiar feel to boot.

There is one big problem from the original that unfortunately translates to the sequel: the killer. The slasher aspect of the film isn’t terrible, though it mostly relies on jumpscares to instill fear in the audience. The ultimate let down is the mystery of who the killer is, just like the original.

In the grand scheme of things, it didn’t really make sense in the entire context of the movie. While the killer the last time around was directly connected to Tree’s journey to becoming a better person, the killer this time feels very forced.

The best parts of “Happy Death Day 2U” are when it captures the tone of the original, and focuses on its main character Tree. However, an over reliance on similar plot points to the original, an added new type of humor, and a somewhat disappointing final act and conclusion, all hinder the enjoyment of the sequel. On its own, I feel this film would have been as fairly close to as enjoyable as the first, but it borrowed so heavily from the first and knowing what came before, the sequel falls into the shadow of its predecessor.