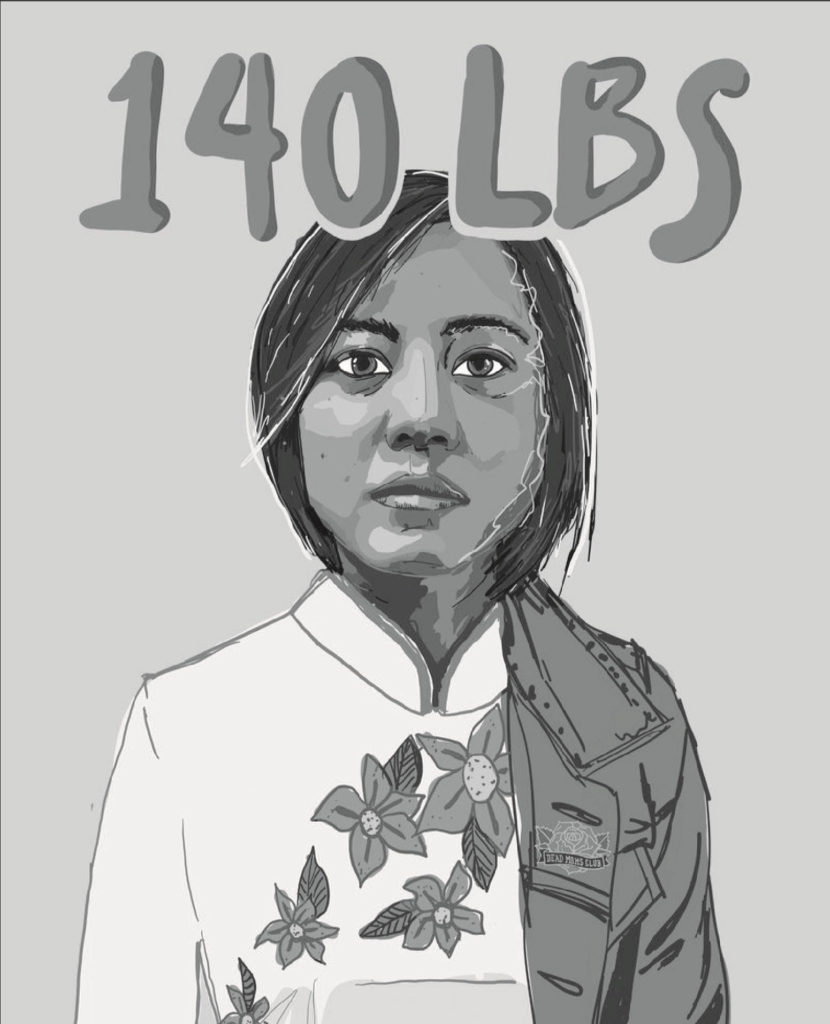 “140 LBS: How Beauty Killed My Mother,” Susan Lieu’s latest solo show that recently finished its first run at Theater Off Jackson, is an emotion-packed performance that follows Lieu in her decades-long search for closure in the wake of her mother’s death due to medical malpractice.

The show begins with an 11-year old Lieu getting ready for volleyball tryouts, as “Wannabe” by the Spice Girls blares in the background. Suddenly, her mother bursts onto the scene to complain about the noise and to ask what she’s doing. A heated argument soon erupts over the importance of prioritizing one’s academics above all else (something that should seem familiar to our Asian-American readers). The two go back and forth until an exasperated Lieu storms out of the house, but not before yelling at her mother, “I hate you!”

Those were the last words she would say to her before she died.

That day, Sep 27, 1996, her mother, Phuong Ha went to Dr. Leslie Moglen’s clinic to undergo several cosmetic surgeries. Tragically, two hours into the operation, Ha lost oxygen to her brain. At this point, Lieu stopped— to say that the human brain can go up to four minutes without oxygen before suffering permanent brain damage; Moglen negligently decided not to call 911 until a full fourteen minutes had passed. After five days in a coma, her mother died.

Lieu would later find out that the hospital her mother was taken to was just two blocks away from the clinic.

The passing of a mother is never an easy thing to deal with, even in the most benign of circumstances, but what happens when that death isn’t due to the slow, inevitable march of time but rather due to the carelessness of someone we trust with our health and safety? How can we grieve? How do we seek justice for our loved ones?

These are just some of the questions that Lieu seeks to answer in “140 LBS.”

In the first act of the show, she fantasizes about the ways she can get back at Dr. Moglen for what he did to her mother and so many other women. Whether it’s targeted Facebook ads just to him or a billboard next to his clinic detailing his crimes, there is seemingly no end to her machinations. At the end of it all, she shouts to the audience: “I wanted him to never mess with Vietnamese people again. THIS was how I could avenge my mother’s death.”

“140 LBS” isn’t a visually spectacular performance—the only two props are a foldable chair and a projector screen—but it doesn’t need to be. The show is carried by the strength of its emotional background and performance, something that is evident in the impact on the audience of scenes like the one above. You experience the same emotions that Lieu feels: the desperation as she pleads with her mother’s lifeless body, the anger she feels towards the surgeon whose negligence killed her, and the disappointment when she discovers that man had passed away.

The show is also punctuated with a number of comedic elements that surprisingly manage to enhance the performance despite its serious subject matter. Whether it’s an off- hand comment by her brother about their aunties’ quirks (“They’ll talk to you, force feed you, and then say you’re too fat.”) or a simple scene where Lieu and her eldest brother, Kang, share a blunt and discuss her quest for justice, the comedy comes naturally. It feels human.

Yet, despite the laughs and all the fantastical revenge plots, the story remains one about grief, and the varying ways in which Lieu and her family have dealt with their mother’s death in the many years since.

In an audience Q&A with Lieu and two of her siblings, Kang and her sister Wendy spoke of their heartache and their reactions to her decision to base a show off their mother’s story.

“I was grieving my own way. It was very personal,” Wendy said. “I had closed that chapter, and I didn’t want to think about it again. Then when she [Susan] said, ‘I’m going to reopen this,’ I was like ‘Oh, God. Please don’t.’”

“I take the position of both my dad and my aunts just because, you know, my mom passed away, but you got to move on with your life,” Kang said. “Like Susan, though, there’s an emptiness.”

As a result of Lieu’s investigation into their mother’s death and the production of “140 LBS,” the three of them have added a new dimension to their shared pain, and they’ve become even closer as friends and as a family.

In the end, Lieu couldn’t make Dr. Moglen pay for his actions, but in going through this intensive, years-long journey to remember and honor the deceased, she managed to rediscover that the living are just as worthy of her attention.